Day 3 of Playing to your Weaknesses. Today’s color is Green. Unlike Red (which I think got shafted), Green has definitely gotten a power boost (especially with it’s rares). While you don’t have any green exalted cards, you do have some mighty beefy animals to take a bite out of your opponent with. Green with any other color would make for a potent deck in the prerelease I think . . . and here’s why. 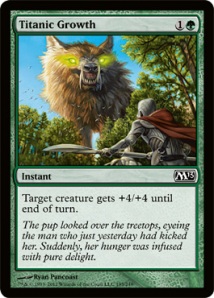 When you have cards like Tormented Soul that is unblockable, and you attack with it while holding back your Exalted creatures, you can instantly end the game with this card. Another good use for this card would be to survive a Searing Spear, or any other red spell. Since most red damange spells deal around 3 dmg, you could throw this on them to keep them alive. Very useful, splashable card. Definitely worth having in your deck this weekend. 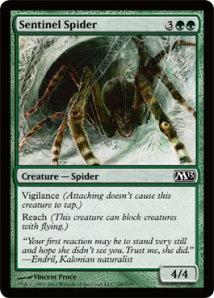 I’m sad to see that Giant Spider won’t be returning, but in it’s place is a MUCH better spider I think. Instead of a 2/4 Reach for 4 mana, now you have a 4/4 Reach spider WITH VIGILANCE. This guy is gonna stand up to most attackers and eat them alive. He can actually go head to head with a Serra Angel now which is saying something, and is fairly costed I think. You’ll definitely want him in your deck if you’re going up against Whelps and other baby Dragons, bats, or a bunch of blue 2/2 Drakes. He wouldn’t be a first choice, but he’d definitely be in my top 20 for my deck if I was going with green.

You’d be crazy not to use this. I don’t think I even have to explain how awesome +2/+0 and trample for 1 mana is in Sealed, or ANY format, especially with Exalted cards! 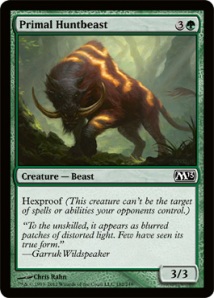 Not the best card, but definitely not horrible. He’s got a good body, and in any other sets you might have a vanilla 3/3 creature for 4 mana in your deck as a blocker/beater, but this guy has Hexproof! He won’t die to a red spell, a black spell, he won’t be exiled by a white enchantment . . . If your opponent is using any of those mentioned colors then I think this is the creature for you. Other than Planar Cleansing and Worldfire, I don’t think there are any other board wipes your opponent can use on this guy. Use this guy like a club and beat your foe mercilessly with him. 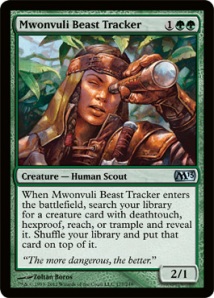 This card won’t see any play in the main deck, but as a sideboard card it can be very useful. It can grab a creature to fill a need you have at the moment instead of having to depend on your luck and top decking it. Most suited for GB, GU, and G decks I think.

EDIT: Somebody pointed out that this would be a great card to use of you pull a Vampire Nighthawk! Another use for it would be to save yourself from mana flooding since it lets you shuffle your deck after searching. 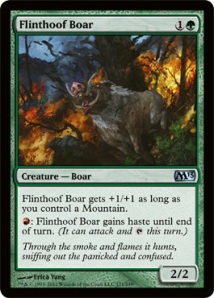 It could possibly be a 3/3 for 2 mana on turn two, which isn’t bad. And if you have an Arbor Elf in play you can untap that first mana, add it to your mana pool again, cast this guy, then use your open red mana to swing for 3 damage on turn 2. It’s the closest thing you’ll get to a Delver of Secrets flipping on your second turn. Not a first pick, but if I was running Red/Green, he’d be in there. 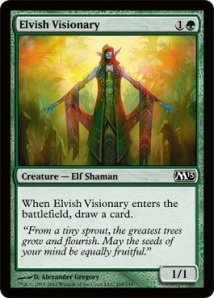 Card advantage is always nice, but this card won’t be really effective until you blink it over and over with another card to keep drawing cards. I believe Roaring Primadox allows you to return a card to your hand at the start of your turn, so if you look at it that way, you can keep using this to draw cards each turn for 2 mana. It would also be good to have in an Elf deck if you pull an Arbor Elf, this card, an Elvish ArchDruid and a Yeva, Nature’s Herald. The probability of getting all 4 of those cards is pretty low in your packs, but otherwise they curve into each other rather nicely and with the Archdruid you’d have 4 extra mana to use for flashing in another creature on their turn. Otherwise on turn 5 you could be looking at 9 mana to bring out something REALLY big like an Elderscale Wurm or a 7/7 Primordial Hydra! 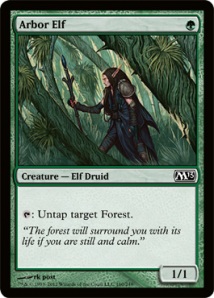 I’m kinda depressed that green is losing a lot of it’s mana dorks. No more Birds of Paradise. No more Llanowar Elf . . . well, this guy basically does the same thing, he lets you add an extra green mana to your mana pool by untapping it, but . . . . it doesn’t feel the same. If you’re running any type of green deck, this guy will come in hand for you because he’s basically adding another mana to your mana pool. In green you want to ramp your mana up as quickly as possible, and this is your only way of doing it at the M13 pre-release.

There are a couple of cards I’m still on the fence about, but maybe you can see a better way to use them than I can. If you see any other great combos or other uncommon/common green cards that would be good in a sealed event, then let me know! Thanks for reading and I hope to see you back here tomorrow when I cover blue.

2 thoughts on “M13 Pre-release: Playing to your weaknesses – Green”