For the Conclave! (A Selesnya Mage’s pre-release tale)

I gotta admit, I was pretty psyched going into the pre-release this morning in Nagoya, Japan. I had been talking it over with my friends all week and I got to the front door of my local shop (Card Brunch Kanayama) at 10 am. The gates weren’t supposed to open until 10:30,  but by 10:05 there were already 23 people. By 10:30, that number had grown to over 60, and by the time staff from the shop showed up to organize things, the line had grown to 84 people. This was all for a tournament that could only take 48 participants.

My friends grew really irritated, having waited since before 10 thinking it was first come first served, but we all found out at the same time that it was going to be random. Everybody would draw cards and those with a losing card would have to wait until the late game.

It rolls around to 11:05 and people start drawing cards to decide who plays. My friends all get a “winner” card, a land, but I pull a checklist card and must wait until the next event at 5pm. Screw that! 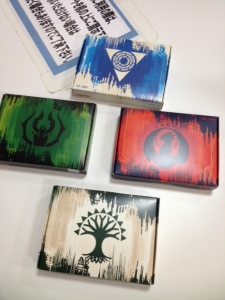 Luckily I had a back-up plan. I had made a reservation at Amenity Dream just in case, and luckily this worked out for me today. I rode my bike quickly up to Osu Kannon, registered and paid my 2500 yen entry fee, and sat down. I managed to see a few people I knew there, so I wasn’t too bored before the game started. I gotta admit, I was really impressed with the pre-release. The boxes were really cool, as well as what was inside. 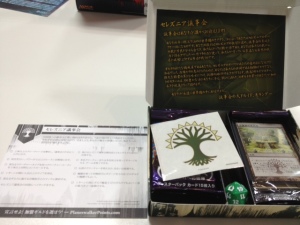 Welcome to Selesnya, here’s your tree

I chose Selesnya, and inside I got a letter from the guild master, my pre-release checklist card, a sticker, a green and white 20 sided roll down die, my promo card (and Guild booster), and 5 packs of Return to Ravnica. I really liked the box. There was a place for you to put your cards when you weren’t using them, and the middle part was great for dice. I carried it around with me all day and it was much better than just sticking my cards in a plastic bag while I played.

I chose Selesnya and was pretty commited to running green and white. Overall my cards weren’t bad, and I probably could have run a Golgari mix, but I think white and green had a good balance of both control and beatdown.

For the Conclave! – my GW Selesnya deck

I originally had cards like Archweaver and Keening Apparation in the deck, but I took those out for this final build. In my deck was:

I also got 1 Azorius Guildgate and 2 Selesnya Guildgates. This is a midrange deck with my highest card topping out at 5 mana. I only ran 16 lands cause that was really all I needed. Without card draw I was really worried about mana flooding, so this worked out the best. My win conditions were Wild Beastmaster (Which would act like an anthem effect whenever I attacked), Collective Blessing, and Grove of the Gaurdian (my promo card). I had a few populate effects and they worked great with my Guardian token on a number of occasions.

I’d basically focus on getting a lot of creatures out then attacking with Wild Beastmaster to boost them up after I used a boost effect on her. Arrest and Soul Tithe were great at forcing my opponent to use their mana up or other small blockers. Splashing in blue for Cyclonic Rift was also a good idea, as it afforded me another win condition if I could return all their permanents to their hands.

I went 2-2 during the pre-release. I beat a Golgari/Rakdos mix and an Azorius/Izzet mix, but lost to an Azorius and another person running a Selesnya deck. Mulligans really hurt me in those losses

Azorius absolutely wiped the floor with me. I managed to get out a turn 6 8/8 elemental from my Grove of the Guardian, but the Azorius player had plenty of effects that would return creatures to my hand. When I did get some creatures out and was trying to put my win condition out (Collective Blessing), it got Syncopated. When my opponent attacked with everything and I cast an Overloaded Cyclonic Rift, he used Cancel. I had to admit that my opponent had great timing and that was one of the reasons I lost. Azorius also had a lot of flying creatures that I couldn’t do much about.

The other Selesnya player just populated faster and more often than I did, and was also able to draw Collective Blessing before me as well.

Looking back on my card choices in retrospect, I would have taken out the Axebane Guardian because mana acceleration really doesn’t happen on turn 4. If you’re playing 3 colors, he’d be great, or if you had more defenders you could probably cut another mana out for another card, but otherwise he’s not good as a one off. Eyes in the Skies probably would have been better because it lets me populate one more time as well as solves my flyer problems as well.

At my draft, Azorius was probably the most popular, but Izzet and Rakdos weren’t far behind. Selesnya had 6 volunteers for the Conclave (including myself), and very few people wanted to join the swarm of the Golgari. Detain was a pretty strong effect, but only when coupled with other effects such as counterspells and returning creatures to you hand. Although I didn’t play against it myself, Rakdos was also pretty nasty. The unleash effect was very dangerous in the limited format and two Cult of Rakdos members got the #1 and #2 spot in my pre-release of 32 people.

I saw a lot of Cyclonic Rifts and Isperia, Supreme Judge, so I wonder if it’s easier to get them than others in a draft. It might depend on the place. Guttersnipe and Dead Reveler were also some really powerful cards. Without life gain, Guttersnipe would have whittled me away to nothing in an Izzet deck. Dead Reveler, on the other, forced you to deal with him from turn 4. If you don’t have a blocker you better have some removal for him. Don’t let him stay on the table!

I also thought that Voidwielder was pretty good in this format. By the time he comes out, he can get rid of a really big threat on the table (especially massive tokens). He also has a great body for blocking. Selesnya Charm was the most powerful charm I think. I used it on a number of occasions to take care of cards like Isperia. I only wish I had drawn more.

Azorius is strong, but Rakdos can hit a lot harder. If you run Rakdos with a splash of blue, you can still run some great control cards like Syncopate, Blustersquall, and Inaction Injunction. I’m going to be using Rakdos tomorrow in hopes of doing that. I also think that adding in some Izzet cards would be great too. There were a lot of great effects in Izzet, but it simply didn’t have the creatures to stay in the game or to finish off your opponent.

Tomorrow I’m  heading to another pre-release, and this time I’m going to go Rakdos and see how it turns out. I’ll let you know! A lot of you are just waking up and heading off to your pre-release, so good luck and go Selesnya!