Return to Ravnica: Playing to your Weakness – Hybrid

This is damn sweet. Will it take over for Diregraf Ghoul in BG Zombie decks? Maybe not, but I still like this card.You get a 1/1 attacker which is pretty vanilla, but as soon as it dies (or you sacrifice it next turn), you can boost another attacker for free. This card would fit in Selesnya Golgari, or Rakdos. It’s a great first turn card and I’d definitely play a few of them if I could.

Hmmm, if you’re running a Selesnya deck there might be some argument for running it main deck, but otherwise you might want to keep it in your sideboard for Azorius or Golgari decks. Overall the card will be much better than Naturalize in sideboards post rotation, and I definitely think it will see some play. Artifacts aren’t to dangerous, but there are some really nasty enchantments like Detention Sphere that will see some play in UW/Esper control decks. Populate is a good ability, but you still need a target to activate it. 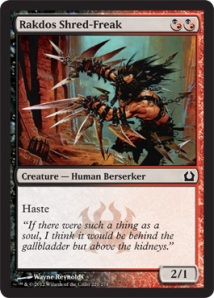 Great in a Rakdos deck, but he would also fit the curve very well in a Golgari or Izzet deck too. If you are playing first, there is a good chance he’ll sneak by for 2 damage that first attack phase. I’d definitely play him in my deck. 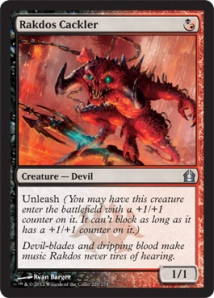 Another awesome first turn card. This guy is probably a good candidate for taking over for Diregraf ghoul in an aggressive BR Zombie deck, but his typing could hurt him. If you have a him and a Gravecrawler in play, you won’t be bringing back the Gravecrawler. If you are playing any of his colors, use him. He’ll fight into your curve very nicely.

Hey Wizards of the Coast, let’s give white counterspells! Ok? Great! On the first few turns you can really slow down an Izzet or Azorius slinging spell after spell at you. And if you don’t use its ability, you still have a 1/1 flyer on the first turn which is nothing to scoff at. Use it if you can, you never know when that ability will come in handy. 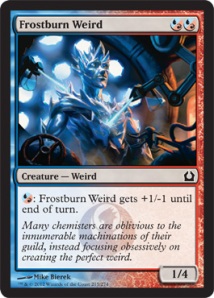 It’s a damn good blocker in an Azorius/Rakdos/Izzet deck, but it can also go on the offensive, reaching 4/1 battle power with 3 blue or red mana. I like his flexibility, and would probably play him over other pumpable creatures due to his high starting toughness. 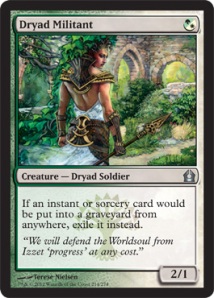 We don’t have Snapcaster Mage or flashback to worry about in Return to Ravnica, but that doesn’t mean we should leave the Dryad Soldier on the side. Think of her as a suped-up Elite Vanguard (though missing the human typing). It’s a great first turn card in Selesnya or Azorius, though I might be a little cautious about her synergy with Golgari ^_^

Chris didn’t feel the need to hide his love of the hybrids. The only reason I didn’t pick Golgari Longlegs and Vassal Soul was because they were vanilla. No powers, no abilities . . . green will have other creatures with that type of body, but Golgari Longlegs would probably fit in very well in a Rakdos deck that needs more power in the mid to long range. Vassal Soul probably wouldn’t be my first pick, but if I’m running low on air supremacy, I’d use him. He’d probably fit in the best with Selesnya due to it’s low number of potential fliers (pretty much 1/1 bird tokens). These are good cards to supplement your deck with when you’re trying to decide on those last 2-3 cards, but I don’t know if I’d run them main deck if I had better choices avaialable to me.

These hybrid cards would fit into any deck using their colors, but they will be more useful in some decks than others. For example, Frostborn Weird would be great in a Rakdos deck, but it could also give a much needed boost of power to an Azorius deck as well. The same can be said of Vassal Soul in a Selesnya deck that doesn’t have many fliers (or any at all). Use these cards to compensate for your deck’s weaknesses, or throw them in to compliment already strong cards.

Multicolor tonight before Sunday’s pre-release! I’ll also have my first report from the pre-release! Thanks for reading!

← Return to Ravnica: Play to your Weaknesses – Red
For the Conclave! (A Selesnya Mage’s pre-release tale) →