I’m breaking the mold a little bit today and working on a side project for the Japan Hobbyist that I’ve been thinking about for a while. It’s called Mall Rats, and it’s a group of articles devoted to shopping in Nagoya, especially at the malls around the area. Today’s mall is Aeon Atsuta, which is located within walking distance from Kanayama station, and is also a short bike ride from my apartment near Higashi Betsuin.

The English website for the mall can be found here.

It gives you the basics of the mall: The location, the types of stores it has, and also the hours. However, more in-depth information that can be found on the Japanese website is severely lacking. Today I’m going to go through what stores you can find there, as well how to get there from Kanayama station and what else it offers.

Aeon Atsuta isn’t the biggest or the best of the malls in the Nagoya area, but it’s decent. It has 3 floors or stores, with the fourth floor devoted entirely to restaurants. Some of the clothing stores you might know are: Uniqlo, Eddie Bauer, Tommy Hilfiger, TK Mixpiece, The Super Suits Store, Talbots, Lowry’s Farm, and Amos Style all have stores in the mall.

As far as other goods are concerned, you can also find a few shoe stores (ABC Mart, Asbee, Barns, etc), accessories (Claire’s), a Sports Authority for your sporting needs (as well as a Murasaki Sports for more alternative sports), and also the very basic but sometimes stylish Muji (Mujirushi Ryohiin) that has a variety of goods.

The restaurants at Aeon Mall Atsuta are your traditional mall fare, such as Pastel (pasta), Rakeru (Omelette Rice), and Baqet (a bakery restaurant that serves various rolls with all of their main dishes). Inside the mall standing alone, you can also find a Starbucks, a Nana’s Green Tea, and a McDonalds. These places are all on the first floor.

On the second floor you can find your tradition food court, with the majority of the restaurants serving Japanese food such as okonomiyaki, ramen, or odon noodles. You can also find a Mr. Doughnut in the food court, just across the aisle from a KFC (my personal favorite), and a Baskin Robins 31 Ice Cream. If any of these places meet your craving for the day, great. If you’re looking for something better, you might want to head off to Sakae or Osu Kannon for lunch then.

Outside of food and fashion, you can also find some useful stores at Aeon Atsuta such as a Softbank store, ABC cooking studio, and a JTB travel agency if you’re planning a trip.

Getting to the mall isn’t so difficult if you’re coming from Kanayama station. There is a shuttle bus that leaves every 10-15 minutes from the exit OPPOSITE of Asunal Kanayama (this exit has the Crowne Plaza hotel, a Starbucks, and the Nagoya/Boston Museum of Fine Arts). There is usually a person out on the sidewalk by the street holding up a sign that says “Shuttle Bus” in Japanese. It’s a free bus, but the draw back is that the last bus BACK to the station from the mall is 8:45 pm. 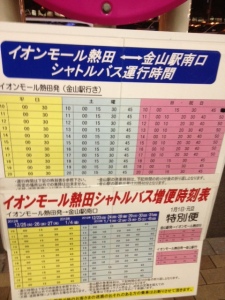 You can also walk from station, but it can be a little bit tricky the first time. The easiest way to walk from Kanayama station is to go out of the Meitetsu Kanayama exit (NOT JR). From there you’ll cross the street and walk down the hill, but make sure that the train tracks are on your RIGHT side as you walk. I believe there is an apartment shop on the corner of this intersection that you can use as a landmark. Once you find the right hill, you’ll walk down the hill for about 10 minutes or so until you see the the mall on your left side. I don’t recommend first timers to walk there, but if you must good luck finding your way (using Google maps will be the best way).

I’d also like to state that Kanayama is a major transportation hub in Nagoya and that all Rapid trains, both from Toyohashi and from Gifu will stop there. Meitetsu trains also stop at Kanayama.

I’d score Aeon Atsuta at 6.5 out of 10. You can get all your basics there. It has a supermarket, you can buy electronics, there are a decent amount of clothing stores, and it even has a sports shop as well. The food court is rather small though which takes its score down a notch however. If it had a little more variety and was easier to get to from the station I’d score it higher. The opening of H&M will definitely make it a better mall, but until it updates a few more stores, I don’t think I can give it more than 6.5 points.

I don’t know when I’ll be able to do another ‘Mall Rats’ feature, but hopefully anybody who lives in or near Nagoya can find this useful if they’re coming to shop and are looking for alternatives to Nagoya station, Sakae, or Osu Kannon.

Thanks for putting up with my off topic post today. You can be sure that I’ll be back to my old self in my next post. If you have any comments or questions, let me know!

← Under the Radar: WR Humans
Gatecrash Mechanics – A First Look →