No, this isn’t an episode of 24. It’s nowhere NEAR that exciting, and the only explosions you’ll see will be at tournaments when you pull off an amazing combo to steal a victory from your opponent in the final, first place match ^_^, causing them to explode and flip the table. I’ll be focusing on blue next, so let’s get right down to it. Which cards will be better for Simic, which ones for Dimir, and which ones will be great for Esper decks? Let’s find out.

The first card I like in blue is AEtherize. It’s a life saving card in certain situations, especially against Gruul and Simic evolve strategies. This card would best work in an BUW Esper control deck with Extort as its main strategy. The longer you can stall the game and activate more extort triggers, the better. This isn’t one of the best stalling cards, but if you already have some great combos in your first 20 cards for sealed or draft, this wouldn’t be horrible to have as your 22nd or 23rd pick. You can also use it to save one of your own attacking creatures if your opponent suddenly tries to kill yours. Those who chose to run away . . . live to fight another day.

Umm, yes, yes, and yes. One mana card – great. Flying? Even better. It gets bigger after each turn if you’re playing big creatures? Sweet. Cloudfin Raptor is going to be one of those cards that your opponent isn’t going to mind much when it first hits the battlefield, but as it starts pinging, hitting, and slamming them on turns 2, 3, and 4, they are going to find that they are suddenly in trouble and need to take out this continuously evolving mutant. If I was playing Simic or Simic/Gruul, I’d definitely take this as one of my first 10 cards. RUG decks will make this guy especially nasty. If you’re playing with Dimir or Esper, it’s also a good card but won’t reach it’s full potential like it would in a RUG or Simic deck. All around a good card for any deck using blue I think. I could see it usually becoming a 4/5 flyer in RUG, and a 2/3 flyer in Dimir/Esper.

Another great card for stalling. Did you get that fun enchantment Blind Obedience in your opening hand? Ok, let’s tap this turn, and tap that turn, and return your cards on that turn, kill that, etc etc . .  and each time pay that Extort cost. If you have the card pool in Sealed/draft it’s definitely possible to mill or extort them into submission for a win. Outside of control, it also has good synergy with Simic/RUG decks, tapping your opponent’s blockers to allow you to hit them for X damage. Not a bad card at all. Not an early pick but not a later pick either. I’d take this right in the middle.

I believe this is one of the cheapest Cipher cards you can play, and it’s pretty decent. Turn your unblockable creature into a mini Frost Titan (that only taps creatures of course) and lock the game down if your opponent can’t put more pressure on you. If you see that your card pool has a lot of unblockable effects or trample, this might be a good card to throw in there in the #22 or #23 slot. Otherwise, you probably won’t get much use out of it. Decent in Dimir and maybe alright in Simic. Perhaps good in a BUG build?

Speak of the devil! An unblockable creature! He must have come in without knocking . . . damn him! This is just the type of card you want to have in Dimir/Cipher decks, as well as Esper. If your card pool is leaning to Dimir’s side, this would definitely be one of the top picks for the draft. Hell, this card would even be good in Simic or RUG because his power would activate some evolve triggers, and he’d be a prime target for some Green Bloodrush cards. Top 5 card in a draft. 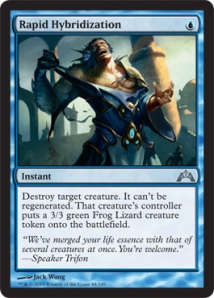 Blue Removal! OMG WTF?!?! Rapid Hybridization is to blue what Beast Within (NPH) was to green. Sure it can only target a creature, but now blue doesn’t have to rely solely on Unsummon to deal with threats anymore. This would be a top 10  pick for any blue deck in sealed or draft. It gives Dimir and Esper decks extra removal or a creature to put Cipher on, it can act like an Evolve trigger in Simic if you target your own creature, and of course you can use it as a last resort on your own creature if it’s going to be killed anyways. Might as well get something out of nothing. It also only costs 1 mana.

A Dimir card if I ever saw one and a top 10 pick for a UB control/mill deck if you’re drafting a lot of creatures. A 2/3 for 3 mana isn’t bad, and if you’re using him at the pre-release he’ll combo well with your promo card, the Consuming Abberation that comes into play with power and toughness equal to the number of cards in your opponent’s graveyard. In other decks, he’d probably just fill out your mana curve and get stuck in there as a 23rd card. In three color decks he would be especially plain.

This guy is a game ender in Simic decks and a top 5 choice in any blue deck. He’s your finisher, your go to guy. 6 mana for a 4/4 flyer is more than reasonable. Even if he’s not being played in a Simic evolve deck, he’s still good enough to be a top 10 pick in a Dimir or Esper deck because of his flying evasion. There are very few cards in Gatecrash limited that can stand up to him.

The Fluxmage is going to be your workhorse in a RUG, BUG, or Simic deck. He’ll be the guy that will combo with the drake to give your creatures flying, or to add more counters onto a Fathom Mage so you can draw a card. He’s a great support card, and you should definitely draft them if you choose other creatures that have +1/+1 counter abilities. He’d be card #12 or 13 for me in any blue deck.

By far the BEST land enchantment (at common. Underworld Connections is the best one at rare) in this block. The red one gave our creatures haste which was okay, and the green one untapped another land, but this one gives one of your creatures flying starting on turn 2. Give your Ciphered creature flying, give your giant Simic beast flying, give a big nasty Gruul monster flying (even though he might hurt himself on the way back down) . . . flying is one of the best abilities you could have in limited, so take this card early because it could be gone before it comes back to you. As your first card at least you can build around it and get more creatures to use with it. Even if you’re stuck with weaker creatures, this card will make them all threats to your opponent.

It’s been said on a few websites already, but Spell Rupture is a close relative to Mana Leak. However, its true power lies in creature heavy decks rather than in control. Since limited is full of creature cards, it will work well in drafts and sealed. Did you notice that the CAN NOT BE COUNTERED cycle didn’t continue in Gatecrash? Yeah. Your opponent goes for lethal against you with Clan Defiance or Aurelia’s Fury and you . . . .. counter it. SWEEET. I would only draft this in a RUG or Simic deck, and I would only take it after you have a few creatures in your pool.

Some good cards for control today and some good cards for Simic. After green I said I was leaning towards Simic for the pre-release, and after finishing blue, I think I will DEFINITELY be playing with Simic on Saturday. The mix of big creatures (evolve), control (counter spells), evasion (flying and trample), and card draw make it a no brainer for me. I’m still not sold on Orzhov or Dimir in limited just yet, but then again I haven’t done my article for black yet. After what I saw today, it’s going to take a lot of convincing to switch – or I could just play Orzhov at my second event! Look for black tonight or tomorrow! Hopefully I haven’t made any typos or misread any cards this time, but if I did please let me know!