I’m sorry . . . I let you guys down. I thought I could get all of the evaluations done before the pre-release (in Japan at least), but it looks like it will be finished right before the start of the pre-release on Saturday in the USA. If you’re interested in seeing how it all finishes up with multicolor, be sure to come back Saturday morning! But for now, let’s rush through black.

Playing Dimir? Milling things? Play this card. A 1/1 for 2 mana isn’t anything to write home about, but there are A LOT of cards in Gatecrash that will put cards into your opponent’s graveyard. Milling is a possible strategy in limited, and this guy supports that strategy 100%. You’re not running mill but have a lot of removal cards like Dimir Charm and Orzhov Charm? This guy wouldn’t be bad in that type of deck either. If it looks like your card pool is trending towards control, mill, or you have tons of removal, definitely take this card. He won’t be a first pick, but he’d fit in the #10 slow nicely.

Kinda vanilla but good in an Orzhov or Dimir deck I think. He’s got a decent body, 4 casting cost isn’t too bad, and he adds an extort trigger to the stack for control. Let’s face it – there are going to be a lot creature heavy decks like Simic/RUG, Gruul, etc, and UB and WB are going to need all the creatures they can get to supplement their removal. This guy will definitely trade with some of the midrange cards in those power based decks, so be sure to pick him up in draft kind of early if you decide to go with any of those control strategies. Not a bad card. Against Green and Red’s beasts you’re going to need all the extort triggers you can get your hands on.

Another denizen makes it into my list. The blue one I said would be good in Dimir, and this card would also be good in Dimir. I don’t think many people will be running black creatures in draft, so if you go with this card be sure you have a good amount of other black creatures to go along with it. I think Shadow Alley Denizen would work best in an Orzhov deck because we’ll see less black and white creatures than blue, red, and green ones. Choose this card if you’re looking for ways to get ciphered effects to trigger in a UB deck, or if you’re looking to push some damage through  in an Orzhov deck. Otherwise, I don’t think he’d be worth a slot in your deck.

Now this is a pretty cool cipher effect. Sure it’s just an overcosted Disentomb, but you can use it over and over again and in more control based decks this type of effect will be very welcome. Slap this on your unblockable creature and keep bringing back the other ones to block or set up a defense with. It will work well with extort since you’ll get to trigger it each time you recast that creature, but it will really shine with Dimir Keyrune or the Keymaster in blue. Is it an early pick? Definitely not. This would fill the #23 slot in my deck.

There are quite a few removal cards in limited this time around. It’s no Murder from M13 or Ultimate Price from RTR, but it will still do the job. You’ll have problems using it against Gruul creatures with huge powers, but on average you’ll probably be paying about 3-4 mana to kill creatures at instant speed. Be careful playing against green and red decks though. They can suddenly Bloodrush the creature you’re looking to destroy and waste your card. On the flip side, you can cast this in response to their Bloodrush and kill it before it gets the bonus. It’d work well in both Dimir or Orzhov, but I’d probably have it as my 15th card or so after I’ve collected other cards related to my decks goal. Speaking of removal . . .

It doesn’t work against Keyrunes, but it kills a creature AND mills your opponent for its power. Awesome card. It’s a Dimir card and would be amazing in a Dimir deck (first pick!), but it would also be a top 5 pick for me in an Orzhov or Esper one. The double black might give you problems if you’re running more than 2 colors, so try to keep to 2 if you’re playing with this card. This card will be especially bad for Simic and Gruul decks. “Oh, you’re using Bloodrush to boost it to 9 power? Ok . . .destroy it, mill 9. “

Haha, this is hilarious. I love this card. A 2 mana enchantment that basically drains your opponent’s life for the creature’s power when it dies. You have a creature you don’t want to get killed? Slap this on it and watch your opponent think twice about killing it. Works great in combo with Devour Flesh. If you attack, you’ll deal damage, then gain life for sacrificing it, life for when it dies, your opponent takes its power in damage, and if you have the Orzhov Guildmage you can combo it so they lose life when you gain life. It’s a win win situation! 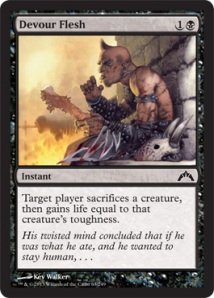 Not the best removal, but it’s still removal. Kind of a worse Tribute to Hunger (ISD), but then again this is a common. If your opponent has just one Lazav in play or another creature with Hexproof, THIS is how you’re going to kill it. If you have other kill spells use them first and keep this one in the side. In draft I’d probably take this as my 10th or 11th card if I was running Orzhov or Dimir. 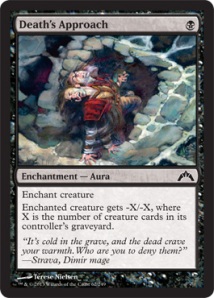 It’s only a matter of time. If you’re playing Dimir, this is an easy way to kill another creature. Sure it won’t have any effect for the first few turns, but once you start milling stuff kiss that creature goodbye. If you don’t plan to use mill cards, I’d probably keep this card on the side though.

A 2/3 flyer for 4 that has a built in Trepanation Blade (minus the power bonus of course)? I like it. If only there was some way to make this a recurring ability . . .oh wait! Blue has a few cards that will let you return a card to your hand. This would work best in a Dimir deck, but his one mana lets you splash him easily into Orzhov and Esper as well. Not a first pick, but I’d take him early in my second pack at a draft once I had my colors decided.

Last but not least is Undercity Informer. He’s a 2/3 for 3 mana (good cost), and his ability is pretty smokin. You won’t have a lot of creatures right away, but later on you can go on a murderous rampage and sacrifice all of your creatures as a last ditch effort to win a hopeless game. This is a great way for Dimir to win, and it would also work in Orzhov or Esper as well.

I did it! I posted this before the pre-release tomorrow! There are tons of cards I want to go over in multicolor tomorrow, but for now at least I can rest knowing that a majority of the cards are done. The cards I chose from black largely support Dimir, but I still don’t know if I’d run it. If you have a great pool for Dimir, go for it. There are definitely a few win conditions like Undercity Informer and multicolor cards that I’ll cover tomorrow, but it’s going to need a pretty awesome card pool in order to beat the onslaught of Simic, Gruul, and Boros. Orzhov players seem like they have their work cut out for them, but a well crafted deck piloted by an experienced player could end up being the most powerful deck at the tournament. The problem is that you’ll need some great pulls to make that happen. I think Orzhov and Extort will be playing mostly support at sealed events, but could really rock in booster drafts.

Thanks for reading and good luck at the pre-release this weekend! Game 1 for me – Simic at 11am, Orzhov at 6pm, and Boros at 11 am on Sunday. Be sure to check back Saturday morning USA time for multicolor!

← Gatecrash tips: Playing to your Weaknesses – Blue
Gatecrash Prerelease – What I learned and First Impressions →