Gatecrash Prerelease – What I learned and First Impressions

By now many of you have probably already received your guild boxes, are opening your packs, and building your decks. I, on the other hand, have just finished eating two pizzas with my girlfriend and her friends and got beaten by ALL of them in Marvel Vs. Capcom 3. I’m a horrible at fighting games, but I think I’m pretty good at Magic. I hope you’ve taken some of my advice when building your decks. I ended up helping a player I beat and he ended up winning the rest of his games at the pre-release for a 3-2 record. I went to the pre-release at Amenity Dream in Osu Kannon, Nagoya today and chose Simic as my guild along with 47 other people.

Out of my 4 American friends that went to the Japanese pre-release in Nagoya, there were two people running Simic, one with Dimir, and two using Orzhov. Out of all of us, the other player running Simic did the best, finishing 4-1 with his Simic creation. One thing is for sure, Gatecrash is a heck of a lot of fun to play in sealed . There were so many swings in power, and the guilds felt evenly balanced. Boros was really fast and Battalion was the most popular out of all the decks (probably 20 people wanted to play with it), but Orzhov had a lot of players as well. After opening my packs, and organizing my card, it looked like Simic was going to be my deck of choice. I had very few black and white cards, an okay amount of Red, but my true power lied in blue in green. 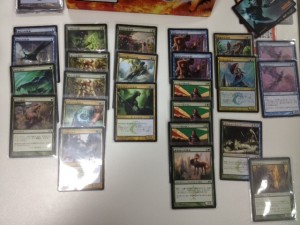 This deck was pretty freaking sweet. I opened:

The focus of my deck was to continuously evolve my creatures, and it worked well most of the time. Master Biomancer is an AMAZING card, and I totally recommend getting a playset of them as soon as possible if you’re a Bant or Simic player. Whenever I played a creature it got automatic +2/+2 counters, which more often than not activated my other creatures Evolve. I was also pretty wrong about Fathom Mage. Sure it probably won’t see constructed play, but in limited and drafts it’s amazing. Putting a Forced Adaptation on it drew me a card a turn, and having 3 Ivy Lane Denizens in play drew me a lot of cards when I put their counters on the Mage.

I had a few heartbreaking losses to start off my day, getting my first Esper opponent down to 1 life EACH game but losing to his removal package, counterspells, and Sepulchral Primordial stealing my Master Biomancer 3 times in one game. My next match was against an Orzhov player that splashed blue for some Dimir cards, but his deck was a little light on creatures and couldn’t keep up with mine.

I felt pretty good with this deck, but my weaknesses were exposed in the next three games. I lost to Boros in game 3 being unable to remove any of his attackers and due to most of my creatures costing 3 or 4 mana, my deck was too slow. Even when I sided in 2 Predator’s Rapport and Hindervines it wasn’t enough. The best way to fight Boros is with removal or burn I think. Game 4 matched me up against  a Dimir player, and with two Consuming Aberrations, lots of counterspells, a few Sage’s Row Denizens, and plenty of removal, there was no way I could keep the blockers coming out fast enough. I really could have used removal or counterspells in this match up, but my card pool had none. Coming fast out of the gates would have been great, but like I said before I didn’t have enough 1 and 2 drops to put pressure on my opponents early.

In my last game I went up against another Simic player, and I won the first game with an overwhelming amount of creatures with Evolve on my side, but in game two he managed to lock me down with Gridlock and other counterspells and eventually whittled me down to zero with Keymaster Thief and Dimir Keyrune. The last game took so long we had to settle for a tie.

I’m down but I’m not out. I’m feeling really good about my card choices and skills in sealed, and looking forward to the Yokohama Grand Prix in March. I’m doing 2 pre-release events on this Sunday, and next weekend when I buy my Gatecrash box I’ll be doing 6 more sealed tournaments. I think I’ve done a pretty good job picking the best cards in limited, but I’m not sure what colors are the best yet. Here’s what I know:

Gruul – Best. Welcome card. Ever. Nobody knows how to write ^_^

If you have any interesting stories from your pre-release or found any great combos while playing please share them with us! I know you’re all waiting for me to finish up my Gatecrash tips with the multicolor cards, but please be patient and bare with me. I should have it out by tomorrow. Next week I will also work on finishing up my Bang for your Buck articles about investing in cards before Gatecrash goes on sale, but it might already be too late :(. Thanks for reading, and look for the last Play to your Weakness article tomorrow!

The Guilds of Ravnica – Gotta catch ’em all!

4 thoughts on “Gatecrash Prerelease – What I learned and First Impressions”