What to Expect: The Impact of Gatecrash on the Metagame – Red, Green, and Multicolor

As promised, the last article for “What to Expect” is upon us. Today I’ll be covering the red, green, and multicolor cards, so for all of you Gruul (GR), Naya (GRW), and all of the other guilds looking to add new blood, this article is for you. As I stated before in my lands post, the addition of Sacred Foundry and Stomping Ground have given both Naya and Gruul decks a lot more speed and mana fixing. The decks have dominated the metagame recently thanks to cards like Boros Reckoner, but that won’t be the only card we’ll see.

First off is Madcap Skills. I’ve already seen a few people using this in an aggressive BR zombie deck instead of Pyreheart Wolf. The game went like this: Turn 1 Gravecrawler, T2 Madcap Skill and attack for 5. Turn three I play a creature but still can’t block so they attack again for 5. I’m down to 10 life on turn 3, and from there on out he plays a turn 3 Geralf’s Messenger, and then swings with the team and gets me down to 1 before finishing me off with a Searing Spear. This card can be great in the right deck. Some people don’t like it, but I think it’s much better than Pyreheart Wolf in red decks. Try it out if that’s what you play. 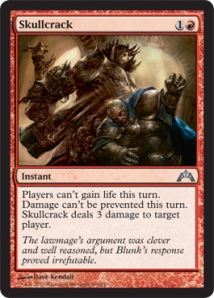 This is a no brainer. If you’re playing Mono red or any other aggressive Red/X deck, you need this card to stop the effects of Thragtusk and Sphinx’s Revelation. It will find AT LEAST 2 spots in most red decks in the sideboard, any it will be main in any straight burn deck. These should see a lot of play as long as Thragtusk and Sphinx’s Revelation remain in standard.

Another card that I think might see some play when tribal decks (creatures with the same type) become big is Homing Lightning. Right now it could destroy a team of Loxodon Smiters, Restoration Angels, and an army of tokens. Not a bad investment for 4 mana, and cheaper to play than Mizzium Mortars’ 6 overload cost or Bonfire of the Damned’s 5 mana miracle effect for the same results. I could see this card getting some play in BUR or GRB decks in the future, but probably as a 2 of for variety.

Green has quite a few borderline cards, but the card that I think will see the most play is Experiment One.

This card recently saw some tournament action in a Jund (GRB) deck about a week ago. It’s a great one drop in a deck that is consistently dropping bigger creatures and evolving it. By turn 3 it could be a 3/3 with the ability to regenerate if needed. I think this card will see some play over the next couple weeks, but it won’t be as successful as other one drops in the metagame like Stromkirk Noble, Champion of the parish, and the mana creatures. It fits in a certain type of deck and won’t see widespread play.

The other green cards show A LOT of promise in sealed and draft, but in standard they don’t really hold a flame to the cards that are currently on top. Crowned Ceratok is an interesting card and aggressively cost, but outside of a GW aggro deck using Gavony Township or a Simic (UG) aggro deck with evolve, he’s pretty ‘meh’. Giant Adephage seems like it would be a good card to put into a Junk (GWB) Heartless Summoning deck with an Armada Wurm, as well as Sylvan Primordial. These cards have a lot of raw power and at 2 mana cheaper, they’d be playable (even if they all get -1/-1) . It’s possible that Heartless Summoning could see a comeback, but it needs a lot more brewing before it finds a good mix of cards that do well in the current meta.

Finally, the last color in my article. There are tons of cards I think will see play in standard, so lets start off with the the charms. 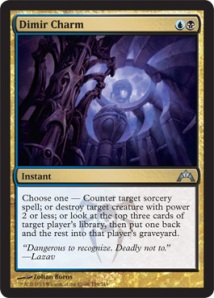 Everybody has gone gaga over Boros Charm and how much impact it will make in aggressive Naya and Boros (RW) decks, and they are right. It’s a great charm and deserves the current $2.50 price tag on it. All 3 abilities are incredibly relevant in the standard metagame and it will see a lot of play. The Simic Charm is also a good card, giving you a Giant Growth/Unsummon/Ranger’s Guile (that protects everybody) all in one. The Simic Charm will see lots of play in Bant aggro/Bant control in the coming weeks, and we might even see the return of Delver of Secrets in a UG build because of it.

Orzhov Charm and Gruul Charm were panned by players because of their situational abilities which made them almost unplayable against the current decks. However, one charm I think has slipped under everybody’s radar is Dimir Charm. It’s INCREDIBLY powerful in a control deck. It’s first option lets you counter cards like Terminus, Entreat the Angels, and Bonfire of the Damned. The second ability lets you destroy creatures like Silverblade Paladin, Huntmaster of the Fells, and any other creature with 2 power. The final ability can be used either against your opponent or to help you filter through your cards.

Let’s say your opponent is in trouble but could top deck a win with his next card. Before his draw you cast this and look at his cards. Sure enough, he had a Bonfire of the Damned and  Geist of Saint Traft on top, as well as a mana. You throw away the two threats and then put the land back on top. Yay! Crisis averted. On the other hand, maybe you’ve been drawing nothing but mana and have more than enough on the battlefield already. What you need is a counterspell or a kill spell. The Dimir charm lets you throw out that land and get the card you need on your next turn. The Dimir Charm would be great in both Grixis, UB, and Esper control I think.

One thing that Gatecrash gave us were some great guild leaders. GTC’s leaders were much better than Rakdos, Isperia, Jarad, and Trostani. Obzedat, Ghost Council is an extremely powerful card that is great against sweeper cards like Supreme Verdict and Terminus because it’s never on the battlefield during your opponent’s turn. It has become a must for Esper and WB control decks, but I think it’s still underused. The Ghost Council should see a lot more play in the coming weeks.

Aurelia, the Warleader is also an extremely powerful card and as of late she’s seen play in Naya decks as a finisher. In a GWR deck, you can ramp into her extremely quick and can end the game on turn 5 if your opponent doesn’t have any answers. Turn one mana creature, turn 2 Loxodon Smiter, Turn 3 Huntmaster of the Fells, Turn 4 Thragtusk, Turn 5 Aurelia and attack with 16 two times!  Her value has finally dipped to under $20 and I think that’s a good spot for her in the current standard environment. If Naya sees less play, you can expect her value to dip even more, so keep your eyes peeled if you want one.

The other Guild Leader worth talking about is Prime Speaker Zegana. People thought she was going to be insanely powerful and become popular in the metagame, but the opposite seems to be true. In Nagoya, Japan, she can be had for as little as 700 yen ($8). Why is a card that becomes a monster and gives you huge card advantage going for so little? It probably has to do that NOBODY is playing Simic or Bant decks at the moment. Until Players switch to green and blue, her value should stay low. Now’s the time to buy her if you are thinking of making a Bant or Simic deck in the future. I’m almost certain her value will double in the future.

Lazav and Borborygmos are both interesting cards, but I don’t think they’ll see a lot of play over the next 3 months. They’ll probably be useful in future expansions, so if you have them wait and see instead of selling them.

Seriously??!?! Nobody is using this card?!?! It’s insanely powerful. For 4 mana, everybody gets to come into the battlefield with an extra +2/+2 counter on them, and if you have multiples that number will only increase. Not only is he great in an evolve deck where the creatures will grow exponentially whenever another creature comes into play, but I think he’d also be great in a RUG (Red/Blue/Green) deck with aggressive creatures or even a BUG deck to give you access to kill spells. I personally brewed a simic aggro deck around him, and the creatures in the deck can get big incredibly quick. He’s going to be a late bloomer, but you can be sure he’ll see more play in the metagame this year.

The Seer is another one of those cards that are sitting on the threshold of playability. People just haven’t figured out how to use him yet. He’ll definitely be in a control deck with a lot of cheap counterspells, disruption, and removal, and cards like Blind Obedience seem like they would be perfect in an Esper control deck with him. He’s currently under $10, so if you are planning to brew with him now would be a good time to buy him because I think he’ll get big in the next few weeks.

There are quite a few powerful cards that I haven’t covered yet, but I don’t know where they fit in at the moment. Aurelia’s Fury seems like it could be good in a Boros aggro deck, Cartel Aristocrat saw a lot of play in Human Reanimator a few weeks ago, Clan Defiance feels like it would fit into a Jund control deck well, Domri Rade could be explosive if the right cards come together, Ghor-Clan Rampager has already proved himself in Jund and aggro decks alike and is one of the best uncommon creatures at the moment, High Priest of Penance is just waiting to be broken (Boros Charm to make it indestructible then ping it?), Spark Trooper makes a good turn 4 drop in Boros when soulbounded to a Silverblade Paladin . . . the list goes on and on.

These cards are good but not great at the moment. If the conditions are right they could really take off, but at the moment I think they’re being overshadowed. Give it some time and they’ll shine.

Thanks for reading my “What to Expect” articles for Gatecrash. Do you agree with my choices? Do you disagree? I’d like to hear what you think I might have missed or what I’m wrong on. I have a few more deck ideas in the pipeline, as well as some Grand Prix Trial action this weekend, so be sure to check The Japan Hobbyist again after the weekend to see what kind of decks are performing well, which cards rock/suck in the current metagame, as well as to explore some lesser known combos. Thanks for reading and I hope to see you back in a few days.