Bang for your Buck: Investing in Cards for Dragon’s Maze – Artifacts

Thanks for being patient. The second installment of “Bang for your Buck” will be covering artifacts currently in standard and which ones I think will gain in value over the next few months. Sadly, artifacts aren’t what they were back in the last block with Scars of Mirrodin and New Phyrexia. The current blocks don’t have cards like Batterskull and Wurmcoil Engine, and aside from a few niche cards that fit into a few decks, artifacts (especially rare ones) see very little play. Following the format of the last article, I’m going to first talk about the cards I chose last time and how they performed over a 3 month period, and after that I’m going to make new predictions using the metagame as my guide.

My suggestions for artifacts didn’t turn out as well as my suggestions for lands did. If you did buy some of the cards I suggested, you didn’t lose any money, but you didn’t get anything out of it either. Sometimes you roll the dice and you get snake eyes. Hopefully this time around my predictions will pan out. So what will happen to artifacts now that Dragon’s Maze is out and we have been FLOODED with Cluestones? How will the cards be affected by the influx of new strategies? And will somebody FINALLY make a Hellkite Tyrant deck? Heh, we’ll see. Keep reading below for my thoughts on artifacts in the DGM metagame.

Like I said above about M13, cards like Akroma’s Memorial and Gilded Lotus will hold their value due to play in older formats, but other than those two cards I don’t foresee any cards really going up in value before M14 is released in July. There are cards like Staff of Nin ($.80) and Sands of Delirium ($.80) that get out into some control or midrange decks’ sideboards, but they won’t be bought up in any large numbers to affect their prices. M13 is pretty much done as far as artifacts are concerned.

I still think that Runechanter’s Pike has some gas left in the tank, especially if Delver can show that it can still do well in the current metagame, but due to the large amount of decks being played now the ones that use it are now a much smaller percentage of the overall metagame. It’s currently at $1, and it might go up a little bit but that will all hinge on the popularity and effectiveness of RWU flash and Delver decks. AEtherling might be a target for it to equip to, but that would just be adding insult to injury since playing AEtherling later on in a control match up is pretty much a game ender anyways. Acended Lawmage is another target that would work well with Runechanter’s Pike. If a UW aggro deck using both it and Geist of Saint Traft get popular, the pike could definitely double in price in the next few months.

For DKA, Grafdigger’s Cage ($1.30) should still be a valid option for players looking to shut down reanimator decks that AREN’T running white, but Tormod’s Crypt seems to be the better (and cheaper) option for most people who can’t use Rest in Peace. I don’t see it really going up in value unless Reanimator gets big again. Keep an eye on the metagame and if Frites/Reanimator gets popular,  buy some up cheap just in case. You can pretty much forget Avacyn Restored. Those artifacts are junk.

These two cards’ value is strongly linked to certain metagame conditions, so if you see Reanimator or Flash decks getting big again, snap them up. Otherwise don’t worry about picking up any of the Innistrad block artifacts.

Return to Ravnica and Gatecrash Artifacts 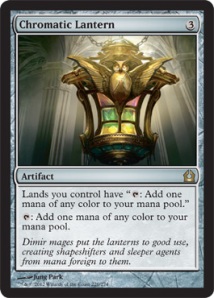 I’m going to go with my choice from last time again, and say that Chromatic Lantern ($3.30) will see some more play, and possibly go up in value a little. It won’t be right away, but as M14 is spoiled and IF  the dual lands such as Dragonskull Summit and Glacial Fortress are discontinued for something less effective (such as Guildgates or fetch lands that tap in), there could be an increased interest in Chromatic Lantern to help with mana fixing, especially in control decks. There are so many multicolor cards in standard now after Dragon’s Maze that we’re going to see a lot more decks popping up with a higher concentration of them in need of mana fixing. They’ll most likely be fringe decks, but they could push the lantern’s price upwards. We’ll see!

Next time on Bang for Your Buck

Meh. Artifacts are never that interesting to go through. If somebody made a killer Artifact deck for Hellkite Tyrant, there might be more excitement for them, but until then Artifacts will be nothing but an afterthought.

(Note: I plan on brewing a Hellkite Tyrant deck with Xathrid Gorgon and Heartless Summoning soon. I’ll let you know how it turns out! Should be a fun casual deck, but probably won’t be standard playable.)

I’ll FINALLY be starting on the colors next time, but I don’t know which one to go over first. Hopefully it will be up this weekend, so check back on Sunday for an update. Thanks for reading, and if you have any suggestions or comments I’d like to hear them.