Bang for Your Buck: Investing in Cards for Dragon’s Maze – Lands

It’s been 3 months and a new set has been released. If you have been reading my articles for a while, then you probably remembered my articles talking about which cards I thought were going to be big and which ones were going to drop in price. The metagame over the last few months has been absolutely crazy, with people switching from one deck to another and causing rapid price fluctuations. While I focused on cheap cards that I thought were going to go up in price last time, this time I’d like to also talk about cards that I think will drop in value, or go on “sale”, in the coming months before the M14 core set is released.

As I mentioned above, the types of decks popular at any given time has been changing almost every day. This means there are more “chase” rares out there that people have gotten their hands on and that the prices have remained pretty steady. There are a few heavily played cards in various formats such as Snapcaster Mage, Liliana of the Veil, and Deathrite Shaman, and those should stay high as long as various formats use them, but there are others that are popular only in Standard. Those cards, such as Sphinx’s Revelation, Bonfire of the Damned, etc, might see a price change the closer we get to rotation. That’s months away though, so don’t worry about it now. Instead, let’s look back at what I suggested 3 months ago and see how they did. Afterwards, I’ll give my new opinions on card prices and how I think they’ll change in the next few months.

Overall I was correct about the dual lands going up in price, as well as the big money lands keeping their value, but the other lands such as Kessig Wolf Run didn’t go up too much. Still not bad, and if you went out and bought some of those duals before Gatecrash, you saved some money. So what will Dragon’s Maze bring? 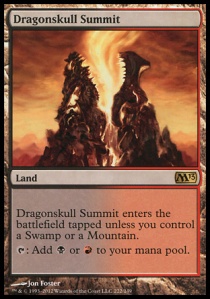 Both Esper and UWR control decks gained a few cards in Dragon’s Maze, so I think that the renewed popularity in those decks (thanks to cards like AEtherling and Ral Zarek) will lead to a slight increase in those lands. For M13 that means Glacial Fortress. However, the land I think will be a good investment for Dragon’s Maze is Dragonskull Summit ($3.30). At the moment it’s the cheapest of the 5 lands, and I think decks like Jund (BGR) midrange, Rakdos aggro, and BR/Jund zombies will have one last hurrah before the Innistrad block rotates at the end of September.

I’d expect Drowned Catacomb ($4) to become cheaper as more players switch to UWR control decks in the coming weeks, but Sunpetal Grove and Rootbound Crag should hold their values at $4 and $5 respectively due to the popularity of their colors.

Alchemist’s Refuge never took off like I thought it would, however Bant decks did get pretty popular as I thought they would. The same can be said of Vault of the Archangel, which is still quite a useful utility land but it will never fit into more than one or two types of decks. The split card Ready//Willing will probably further diminish the need for the Vault. 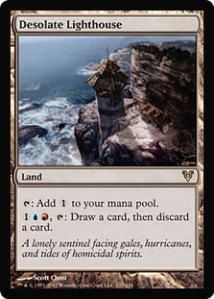 My suggestion for Dragon’s Maze is Desolate Lighthouse ($0.50). As I said above, UWR decks such as flash or control will probably see an increase of players, but Grixis (BUR) also got a few nice cards from Dragon’s Maze such as Ral Zarek and Turn//Burn. More players will be playing these colors, which means that the lighthouse could see a moderate increase. I wouldn’t expect much, maybe $1, but out of both of those sets I think this one will see the most play. 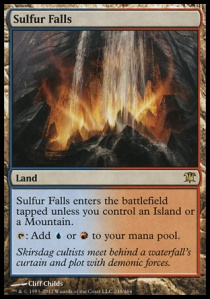 Sulfur Falls can now be had for the low low price of about $5.50. This is a great deal, and as I stated above, UWR and BUR will see a lot more play in the next few weeks as UWR flash, UWR tempo, and Grixis Control make a comeback. Lots of Ral Zareks and split cards have been opened, and people will be eager to play with them which means they will need the land. It’s also possible that UR Delver will make a comeback as well with new fun cards such as Nivix Cyclops and Turn//Burn. I think the other cards will hold their value, but I’d expect Hinterland Harbor to drop a little in value as more people switch away from Bant and towards red/blue based decks.

As for the utility lands in Innistrad, I don’t think they will change too much from their current prices between $1-2, but Kessig Wolf Run ($2.60) might see some more play if Naya and Jund decks become popular again.

Return to Ravnica and Gatecrash Lands

As you know, Dragon’s Maze reprinted all of the shocklands from the previous two sets, which means that there will be a larger supply of the shocklands than before. I don’t expect prices to go up on any of them soon, in fact you can probably expect a few of them to drop in value. Temple Garden ($11) and Stomping Ground ($13) should hold their value thanks to their popularity, but I think Breeding Pool ($9), Sacred Foundry ($11.50), and Hallowed Fountain (9.50) should get a little cheaper in the coming weeks. If I had to bet on one card going up, it would have to be Steam Vents.

Steam Vents ($7) used to be quite a hot card. Back during the start of the Return to Ravnica block, more than 50% of the metagame was some form of UWR. This meant that everybody was using the Vents, but after about two months people started to shift away from those types of decks and the card’s value plummeted. When I was in the USA for vacation a few months back, I found them as low as $5 a piece. I don’t think they can get any cheaper than they already are. If you don’t have a play set of them already, now’s the time to get them while they’re cheap.

Overall I think I did a good job calling the prices for lands last time, but what I didn’t take into account was the large number different decks that would become popular in the metagame. It’s a very healthy metagame where any deck can get big at the drop of a hat, but it also means that prices fluctuate like crazy as people jump from one deck to another. Next time I’ll be covering Artifacts, but don’t expect it to have too much different information from the previous article.

If you have any suggestions about lands you think should be in this list, or if you have comments, please leave them below and I’ll do my best to get back to you. I’ll be a little busy next week so I’m not sure when I’ll be able to post up the next article, but hopefully I can put one out Monday night before a full week of work bogs me down. Thanks for reading and see you next time!

← Dragon’s Maze: Playing to Your Weaknesses – Selesnya and Orzhov
Bang for your Buck: Investing in Cards for Dragon’s Maze – Artifacts →