Bang for your Buck: Investing in Cards for Dragon’s Maze – Green

We’re almost done! After green is the encyclopedia of multicolor cards from Return to Ravnica and Gatecrash to cover. We’re already more than a month into the DGR metagame (or will be by the time you read this), and with the metagame stabilizing it’s going to be a lot easier to see which deck types should stick around until M14 comes out July 19th. As always, let’s get started with the green cards I THOUGHT would hit it big after Gatecrash.

I did a decent job with Green, getting about 65% of my predictions right. I’ve come to understand Magic players (both competitive and casual) more and I think I’ll do a pretty good job with Dragon’s Maze’s installment as well. Like last time, let’s start off with M13.

Garruk, Primal Hunter ($11) should continue to see play right up until rotation. If he is not reprinted in M14 (meaning that a new version of him is printed instead), you can expect his value to drop a little bit, but overall he’s a very good card in standard. He fits into Bant, Jund, Naya, Junk and any other green deck being played. Ground Seal has seen an increase in play thanks to Reanimator’s oppression, but I don’t think it will lead to a large increase in value. The Primordial Hydra ($7) hasn’t seen much play in standard, but I’m guessing it’s very popular in other formats. I can’t say what will happen to the value though since I have no experience with it.  Rancor ($2) is another solid card that will definitely keep it’s value, even after rotation. Bant hexproof and other aggro decks love this card to death, so don’t expect its value to drop. I also think Thragtusk ($11) will hold it’s value at least until a month into M14.

Overall, I don’t see any big changes in M13 happening. Green decks are ingrained in standard now, which means everybody plays them and that these cards are the most sought after. The only place they have to go is down, and that’s only if green suddenly falls out of favor and people go control again. Probably not going to happen.

Craterhoof Behemoth ($7) is done for in reanimator decks, or at least until the metagame shifts away from fast aggro into midrange again. I still think that Wolfir Silverheart has some fight left in him though. $2 seems like a steal, and he WILL find his way back into standard eventually (before the rotation). I wouldn’t recommend him as strongly as I did before, but I still recommend him.

As for Dark Ascension, I don’t really have a strong feeling about any of the cards losing or gaining value from their current prices. Vorapede ($3) and Predator Ooze ($3.50) might be taken back into the standard fold, but I don’t think their prices will change too much. 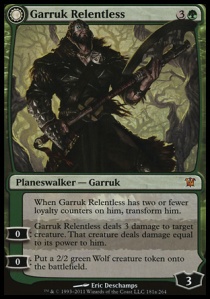 Garruk Relentless ($8.50) should see more play in this green heavy format. As people switch away from blitz decks and focus on more power (like in the Domri Rade Naya deck), I think Relentless will find his way into more decks. It could be main, it could be in the sideboard, but being able to act as either a token maker, a 3 damage removal spell, or as a creature tutor (his -1 to search for a creature on the flip side) makes him a very versatile planeswalker. I could see him rising in value to $10 in the coming weeks.

The green creatures in RTR seem to be outclassed in almost every way by the cards seeing play right now in standard. I’m not saying they aren’t playable, but until the Innistrad block rotates out I don’t think we’ll see many cards rising in value. RTR is mostly a multicolor set anyways, so I wouldn’t expect too much from mono colored cards. Deadbridge Goliath and Mana Bloom will probably see the most play in standard, but I don’t think their $.50 value will change at all in the coming months. 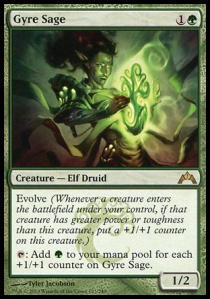 The card from Gatecrash that has the best chance of going up in value is Gyre Sage ($2.50). They were topping out at close to $5 each a few weeks ago when midrange and other decks had the time to utilize it’s ability, but since the switch to super fast aggro, the Sage has dropped in value. I think we’ll see more of him as aggro fades in the coming weeks though. Expect a $4 value in the future.

Another card I think people should be on the look out for is Sylvan Primordial ($0.75). Think of him as a green Nicol Bolas + a Farseek. Being in green, it’s very easy to ramp into him with mana creatures or to let him hit the field naturally in a midrange deck. Yes, aggro is big now, but I have a feeling that slower midrange decks like Naya, Bant, and Junk will see more play the closer it gets to M14 (I’m personally thinking of an elf wave deck of sorts that uses him and Acidic Slime, but that’s another post for another time). This isn’t a bulk rare in my opinion. I expect it to hit $3 sometime in the future, so keep your eyes on midrange!

Coming up Next on Bang for your Buck

We’re finally in the home stretch. Next time are the multicolor and hybrid cards, and after that I can finally move on to bigger and better things such as decklists, metagame updates, and everything else Magic. I hope these articles have gotten you to think about some of the lesser used cards out there, and maybe even saved you some money (if you buy them and they DO go up). I realize that this article is coming really late in the Dragon’s Maze set (you can blame my work schedule for this), but I feel it’s better to be consistent. I’ll get a jump on the M14 set when it comes out in July, promise! Until then, thanks for reading and look back for the final installment in a few days!

← Fight for your Rites
Unqualified →