It’s spoiler season again for Magic the Gathering, and for M14 we seem to have gotten a lot more cards spoiled a week before the pre-release than ever before. 191 out of 229 cards have been spoiled on MTG Salvation already, and quite a large chunk of them are rares. We should get the full list on Monday to pour over before the pre-release next weekend, but before then I’d like to give my first impressions on the set and how I think these cards will affect the metagame.

(NOTE: I’m using cards available on Wizard’s Website in the M14 Gallery for this list. While I know that cards like Scavenging Ooze and Mutavault have already been spoiled for M14, they do no appear in the gallery yet so I won’t feature them until next week.) 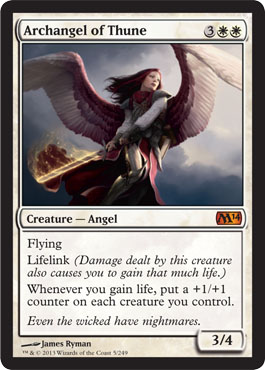 Without a doubt, the Archangel of Thune will have the biggest impact on the metagame come July. With Restoration Angel (and probably Thragtusk) rotating out in a few months, Naya (GWR), Selesnya, and Bant decks will be looking for something to fill their spots. Right now I can see one card that would work perfectly with it: Trostani, Selesnya’s Voice. Every creature you play when both of these cards are in play will act as a Gavony Township. Draw a late game mana creature? Everybody gets a +1/+1 counter when this comes into play. Make a beast token with Garruk, Primal Hunter? Everybody gets a counter. Armada Wurm and Advent of the Wurm are also great cards in these colors to play with.

The Green/White decks shouldn’t be the only decks that get to have fun though. Some other decks that I think this will card will be good with is WB token extort. I built one for fun using Pontiff of Blight and tons of token creators. The idea was that you put out the tokens, they all gain extort, and using Crypt Ghast as mana acceleration, you suck a ton of life from your opponent. The deck has a lot of removal, but if you’re gaining life each time you extort, you could easily put 4-5 +1/+1 counters on those tokens since each extort trigger stacks (meaning you gain one life before moving on to the next trigger).

She’ll see a little play right away in July, but she’ll really break out in October after rotation. 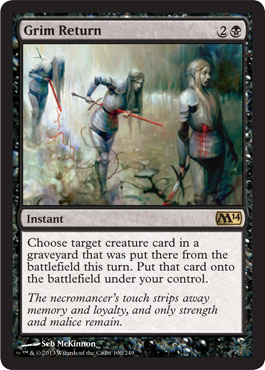 There are still probably quite a few black cards yet to be spoiled, but out of the ones that have been spoiled so far, I like Grim Return the best. It’s kind of like a Debt of Loyalty (from Weatherlight), letting you steal a creature that died this turn. This could have all sorts of fun applications. You could kill your opponent’s biggest creature with a Doomblade during their attack phase, then bring it back as a blocker on your side before declaring blockers. They’ll be down 2 creatures and you’ll be up one. While it would cost 5 mana to do something like that, I wouldn’t put it past a control deck. Aetherling has become a great finisher, but against reanimator decks this gets around pesky creatures such as Angel of Serenity which will just continue to recycle creatures from the graveyard.

This would also work well right after a Supreme Verdict or other Wrath Effect. Look for it in Esper (BWU) and Dimir control, but I wouldn’t be surprised to see it show up in other decks such as Junk (GBW) midrange decks as well. 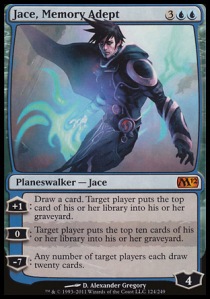 There have been some interesting blue cards spoiled so far in M14, but nothing ground shaking like Snapcaster Mage or Aetherling. However, control players can breathe a sigh of relief that they don’t have to take Jace, Memory Adept out of their deck. He’s still a great finisher, milling opponents for 10 and putting them on a very short clock if they can’t kill you in 3-4 turns. He won’t change the metagame, but heshould keep control decks in contention, especially Esper control. 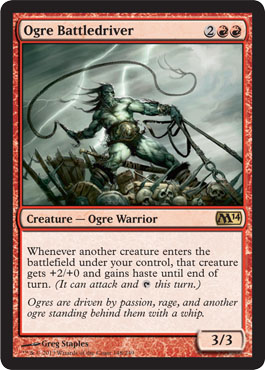 While I think that Chandra, Pyromaster will definitely see a decent amount of play after July, I think the Ogre Battledriver will have a bigger impact. He’s no Hellrider, but giving all of your creatures haste and +2/+0 is huge. My friends and I have been discussing this card, and RW/RWB tokens seems like a great fit. Playing a Lingering Souls and attacking for 6, or flashing it back and attacking for 12 would create a huge shift in a game. If you have Intangible Virtue (ISD) in play, things get even worse for your opponent. Krenko, Mob Boss, long written off by the standard metagame, might see more play in a mono red Goblin deck along with the Battledriver.

Gruul Blitz might also see some new builds with him in there instead of Hellrider because the Ogre Battledriver’s ability gives you a better long game against Naya and GW decks where creatures tend to be huge and it is very unlikely to survive a direct attack with GR’s creatures. Teaming him up with the Young Pyromancer in a Token/burn deck would also make for some interesting battlefields. Burn, token, attack with +2. 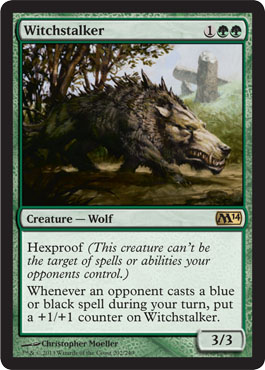 Did Bant (GWU) Hexproof REALLY need another creature to play in it’s deck? Geist of Saint Traft, Invisible Stalker, and now Witchstalker. I could see people switching out Loxodon Smiter for him just so they have another hexproof creature to give opponents headaches with. Both Geist and Stalker will rotate in a few months, effectively dismantling this deck type, but until then it’s going to only get nastier.

Witchstalker should also be good in GW aggro and mono green decks. Slap a Rancor on him and you have a 5/3 trampling creature that can’t be Azorious Charmed back to the top of the library or burned with Searing Spear. I’m certain he’ll find his way into a number of decks come August, so don’t be surprised when you see him everywhere.

It’s pretty much a given that everybody will want to use Mutavault in their decks, but that card will still hold quite a high price tag, putting it out of reach of many players. 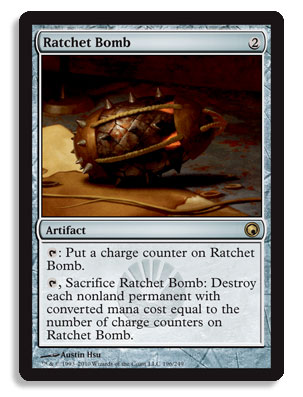 Ratchet Bomb was an incredible card from the Scars of Mirrodin set that rotated out last October. It allowed colors that normally couldn’t deal with certain creatures, planeswalkers, or enchantments a way to get out of trouble. Black can’t destroy enchantments and artifacts, but with Ratchet Bomb they can. Blue can’t destroy creatures (aside from Rapid Hybridization) but Ratchet Bomb can. Green can’t take out Planeswalkers but . . . well you get the idea. The biggest impact this will have on the metagame is against token strategies. Decks like Aristocrats, Junk tokens, and GW tokens will be screwed. You can sacrifice it without putting any counters on it to destroy all creatures with a casting cost of zero (tokens cost = 0).

I think this card will see a lot of play in sideboards, so don’t think your strategy is safe anymore. This card is going to shake things up.

By Monday, the entire set list should be up, revealing the last 50 or so cards that we haven’t see yet. What surprises will it hold? Personally, I find M14 rather nostaligic. The reprints of Millstone, Shivan Dragon, and Nightmare all make a soft spot in my heart. Those are the cards I played with when I was 12 years old, and which I thought were the strongest cards in the game (they were at the time).

With the full set revealed, I’ll be working around the clock to put out all 6 articles of “Play to your Weaknesses” by Saturday. Luckily I have a few hours free each morning before work, so it should be a lot easier to get them out on time for M14. Hope to see you on Monday! Thanks for reading.

← Emperors of the Wild
The Japan Metagame Diaries: The Road →