The Japan Metagame Diaries: The Road

The road to becoming a professional Magic Player in Japan is very difficult. When you live on an island of only 140 million people, and the majority of people live in the Tokyo, Nagoya, and Osaka areas, you’re bound to run into some tough competition. Japan only holds 3 Grand Prix a year, 4 World Magic Cup Qualifiers, and about  8 Pro Tour Qualifiers per season. This means that it is VERY difficult for a player who wants to go pro to become one. In the last few years, Magic the Gathering has grown exponentially in popularity thanks to a very rich card culture. It starts early with card games like Pokemon, matures into intermediate level games such as Yugi-Oh and Vanguard, and as those players get older they usually move into Magic the Gathering. Magic will only continue to expand here in Japan as the years progress, but let me ask you one question, how many pro Japanese players do you know?

I’m going to guess you can count them on one hand. The United States has dozens and dozens of professional players thanks to various groups banding together and also thanks to the sheer number of tournaments in the USA. There is a GP almost every week, and if there isn’t there are invitationals, Opens, and other large tournaments open to the public where they can hone their skills and get name recognition. Not so in Japan. If you don’t have the cash to head out to other asian countries like Thailand or Taiwan for GPs, or if your name isn’t Yuuya Watanabe or Shuhei Nakamura, then odds are you will have a hard time of reaching that pro status.

Let me introduce you today to Sunao Nakai. 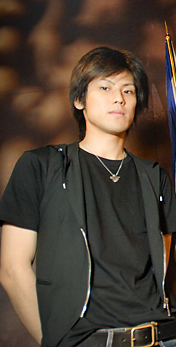 Sunao rose from obscurity last year when he won a spot on the 2012 Japan World Magic Cup Team. Before that first big win, he hadn’t been in any GP top 8s or won any Pro Tour Qualifiers, but since then he has been putting up decent numbers all around Japan. In the current season of Planeswalker Points he’s ranked 76th in Japan. He lives in Kyoto, which gives him access to the big events in Osaka, Nagoya, Kobe, but he isn’t averse to traveling farther in Japan to get points. When I asked him about how much traveling he does for Magic, he told me he goes to every major event in Japan.

His goal is to eventually reach platinum and to become a pro player, but he has a long way to go and has to put up some good numbers consistently to show that his WMCQ win wasn’t more than a fluke.

I personally think he has a bright future ahead of him. I’ve seen him at every PTQ I’ve been to as well as Grand Prix Yokohama this March and Grand Prix Nagoya last year. Last weekend, July 7th, at the Hamamatsu Pro Tour Qualifier, I had a chance to sit down and talk with him about his thoughts on becoming a professional player. He’s a very friendly person and actually remembered me from a past event!

(Note: My Japanese is nowhere near sufficient enough to ask the really probing questions that most players want to ask so some of the nuances and details of the conversation are limited. I tried to get the gist of his responses and to expand on it. I apologize and hope I can improve my Japanese in the future for better interviews).

The Japan Hobbyist: What’s the the professional circuit like in Japan? How does somebody reach pro status here?

Sunao Nakai: At the moment the professional circuit is non-existent in Japan. The only events available to improve your ranking in Japan are the Grand Prix, Pro Tour Qualifiers, and the World Magic Cup Qualifiers held every year. Aside from that, it’s very difficult to get pro points.

TJH: What difficulties do you find in trying to achieve pro points?

Nakai: As I said before, there are very few large events held every year in Japan. This makes it incredibly difficult to get points because there is a large number of semi-professional players that are also vying for those limited pro points.

TJH: Because it’s so hard to get those professional points (which can in turn lead to invitations to events outside of Japan), do you think that Japan is under or over represented at world Magic events?

Nakai: Magic has become very popular in Japan recently and the number of players have risen considerably since I started to play. But due to the limited number of events available to players, it’s difficult to translate those numbers into more overseas players. I’d like to see more Japanese players overseas in the future.

TJH: Do you feel that Japan deserves more professional level events (such as Grand Prix) from Wizards of the Coast?

Nakai: Definitely. The number of players at recent events proves its popularity is growing and that Japan can support it. However, I think 4 Grand Prix a year is optimal. Any more and you run the risk of the tournaments losing their importance and players not caring.

TJH: What’s the best way for players to “Go Pro” in Japan? What advice do you have for wannabe professionals?

Nakai: Play in a lot of Pro Tour Qualifiers and every Grand Prix. There are no invitationals or open events in Japan, so these are your only chances. Once you’ve made your name you have to work hard to keep it.

TJH: On a side note, do many Japanese players you know play Magic the Gathering Online?

Nakai: Out of the people I have talked to, I’d say that 50% of Japanese players use MTGO.

TJH: One final question, in your opinion, how does your culture affect how you play and build decks?

Nakai: That’s a tough question. If I had to say how Japanese culture affects deck building and how I play, I’d say most players here like to “think” blue. It doesn’t necessarily mean building a blue deck, but using blue or trying to do what blue does (such as disrupting a person’s strategy, building tempo etc). When I look at players overseas such as in the USA, I imagine more aggro and creature based strategies. Perhaps playing BIG spells is a better way to describe it.

TJH: Thank you very much for taking the time to answer my questions. Good luck at your next PTQ and I look forward to saying hello at GP Kitakyushu!

Nakai: No problem. See you next time

(I’d like to once again thank Nakai-san for letting me interview him at the PTQ in Hamamatsu on July 7th. He finished in 9th place, JUST missing out on the top 8 due to a draw in his last match. A full tournament report will come later this week after the M14 spoilers are released. Thanks for reading and if you’d like to leave questions for me to ask other professional players in the future, please do so in the comment area below. Look for another article soon!)

2 thoughts on “The Japan Metagame Diaries: The Road”