M14: Playing to Your Weaknesses – White

From my first look at the whole set, all I have to say is holy crap. While this set won’t change standard drastically until rotation, it will be drafted a lot. If you look at it from a limited perspective, centered around booster drafts and sealed events, then you’re in for quite a battle. The colors in M14 look more balanced than they were in M13, meaning you can choose almost any two colors and have a very strong deck. When I was going through the cards and picking out which ones I thought would be good in limited (creatures and removal mainly), I found myself picking out a lot more than I did from any of the sets I’ve covered on Play to your Weaknesses. Will I be correct on all my choices? Probably not, but once you draft it a little I think you’ll agree that the set is a lot more balanced than before.

Today I’m going over white, and there are quite a few that I think will see a lot of play in draft. 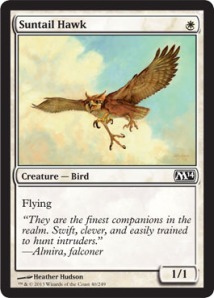 Our first card is simple enough. It’s a 1/1 flyer that can start attacking on the 2nd turn and get in a few points of damage before they do something about it. Its a good card to start your curve out with if you’re playing white, and at its worst it’s a chump blocker later on in the game. One of the 23 cards I’d choose for my deck, but not absolutely necessary if you find something better.

Aside from Serra Angel, the biggest white creature in M14 is Stonehorn Chanter. Six mana might be a little high for a 4/4 , but looking at the set as a whole, it’s bigger than 80% of the creatures. What that means later on in the game is that you can attack for 4 each turn while still keeping him untapped as a blocker as well as gaining you 4 life if you want it. He combos great with Angelic Accord to get you a 4/4 flying angel token, but for the most part he’ll be a solid late pick in draft or one of your top 20 cards in a sealed deck.

She’s an absolute legend in Magic, dating all the way back to the original sets. A 4/4 flying, vigilance Angel for 5 mana is going to end the game really quickly against your opponent unless they have a 5/6 demon or a 5/5 dragon to block it. M14 has tons of creatures with flying, but very few are as big as her. This is a high pick in draft if you’re going with white (top 5 maybe), and it should definitely be in any white sealed deck you play.

Walls are usually kind of “meh” to play, and that’s because they can’t attack and lack the ability to affect the board much. Wall of Swords is great in limited because it will block and kill almost anything your opponent sends your way. Not a high pick, but definitely in the top 18 cards of your deck. 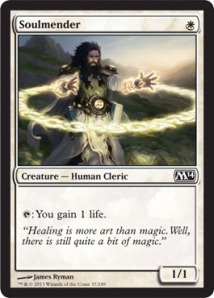 Small 1/1 creatures usually don’t see too much play in limited because they outlive their usefulness very quickly and get out performed, but I like the Soulmender because if you choose not to attack you can use him to gain incremental advantage over your opponent by gaining life. Not a high pick, but if you need a 23rd card for your deck consider putting him in there. He’s not totally worthless.

Pacifism is great because there isn’t a surefire way to get rid of enchantments in limited unless you are playing green and have a Naturalize. Pacifism will basically take a creature out of the game, but be careful because they will still be able to use their creature’s abilities if you use it. If you’re not playing black or red, you’re going to need removal and this card isn’t too shabby. Pick it up to help support your creatures and debilitate their best creature with it. Top 15 pick in draft.

I like Master of Diversion. His 3 casting cost isn’t too high, 2/2 is a solid power . . . this guy will really shut down your opponent’s finishers later on in the game. If you can put some kind of bonus on him such as an enchantment or equipment, he could be pretty darn good. You can keep tapping their large creature, then make them block with their other creatures and whittle down their forces. You definitely want him in your white deck, but he’s not a high pick.

There’s not much to say about this card. It gives you two creatures for one card, and being slivers this could work out in your favor if you open a few other ones. The 2 for 1 lets you use that card spot for another creature or spell that can really help out. Another solid card, definitely one of my top 20 picks and not an after thought.

Again, this isn’t great but I think it’s decent. It’s blocker with life link that could combo well with various life link strategies like Angels Accord and Voracious Wurm, but most of the time he’ll just be gaining you two life a turn and sucking up their small attackers. Probably a later pick in draft, and the 18th or 20th card in your sealed deck. 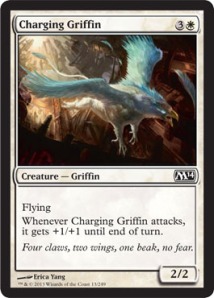 Flying used to be the best evasion you could have in limited, but there are so many flying creatures in M14 that they need something to set them apart. The Charging Griffin attacks for 3 but blocks for 2, which is his draw back. However, I think you’ll be using him for offense most of the time so it’s good to think of him as a 3/3. If you can put together a decent amount of strong blockers on the ground and a squadron of flyers in the sky (blue and white are looking insane with that strategy), you can have a pretty strong deck that will overwhelm those decks without any fliers. Solid card in limited I think.

It’s no Azorius Charm but it’s white removal and I’ll take it. While the sacrificing an attacking or blocking creature can back fire if they are attacking with lots of 1/1 creatures or 2/2’s, if you hold onto it until the time is right and take out their finishing creature or a pesky blocker, this card can have great value. There are other cards in other colors that will kill and destroy better, but this is decent in white. Not too high in draft, but still a solid card to have late in the game.

It’s a common, so you can’t expect too much from it, but having first strike and “firebreathing” (being able to pump him up) is a pretty good ability for a normal creature. It’s also splashable since it’s not double white, which means you can put it in a 2 (or even 3 color deck) if needed, put some nice enchantments on it and add even more value. Later on in the game when you have a lot of extra mana floating around, his ability will be a lot more relevant. I’d put it around my 15th choice for a deck. 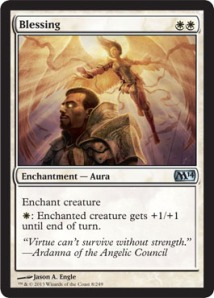 White “firebreathing”. Most players will say that playing enchantments is a bad idea, but I think this could be a good card in your 22nd or 23rd card slot. Putting this on a creature with trample, flying, or other evasion (like a Phantom Warrior) is a good way to end the game quickly. When deciding whether to play this in your deck or not, take a look at your creatures and if there is an expendable one like a vanilla 1/1 or 2/2 creature, it might be better just to play this to support your more powerful creatures.

This guy is by far one of the best white commons/uncommons in the set. A 2/2 “Fiend Hunter” is extremely powerful. He can turn the tide of the battle by exiling your opponent’s finisher, and as long as you keep him alive he can cripple the other player. This card is a top 5 pick in draft, and definitely one of the first 5 cards I’d put in my sealed deck as well. Removal plus a creature in one are great.

That does it for white. As always, if you think I missed a card that should be included in the list or disagree with one of my choices I’d like to hear your opinions. Feel free to leave a comment and give me a reason why or why not a card should be in there and I’ll take it into consideration before amending my article. The next article should be out soon, so be sure to check back for updates. It’s going to be a busy week until the pre-release and I’m going to do my best to get all 6 colors out before Saturday.

← The Japan Metagame Diaries: The Road
M14: Playing to your Weaknesses – Blue →