M14: Playing to your Weaknesses – Blue

My first reaction to the blue cards in M14 was that Wizards are trying to redefine was blue is. While there are still elements of control in the new expansion such as tempo cards, mill cards, and counterspells, it looks as though blue’s creatures are getting better (at least from a limited player’s perspective). There are lots of added bonuses to blue creatures, lots of flying creatures to evade with, and lots of card draw. Here are a handful of cards I think will be good during the pre-release and in other limited events.

This first card is going to depend largely on your partner colors. The colors I’m thinking of the most at red and green. Both of those colors have some very large creatures and if you give them evasion with flying, you could deal a lot of damage to your opponent while they look on with despair. I think this card could even be splashed in a Red/Green deck for optimal use. While it’s not a top pick, if you have collected a large amount of big creatures and are looking for an alternate win condition later on in the game, consider this enchantment as the final 23rd card. There are going to be a lot of flying creatures in this set, so it might be a good idea to keep this option open.

This is a very solid card for blue. Four mana for a 3/4 creature in blue is amazing (compared to the other options in this set), and the ability to pump it up to a 6/1 or a 0/X (Depending on the mana you have) means it can be aggressive if you need it or a giant wall to block just about anything. If it looks like blue is going to be one of your colors, take this as one of your top 10 picks. It will be effective both in the early game and later in the game. 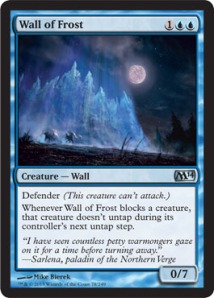 Speaking of walls, Wall of Frost is being reprinted and this card wouldn’t be bad as a blocker. Its ability to “Tamiyo” a creature it blocks will make your opponent think twice about attacking you unless they have overwhelming numbers (which in that case you’ll probably be dead anyways). This is a card to help you stall a game. Mill decks with Traumatize, Jace, Memory Adept, Millstone,  and Tome Scour would work well with it. Not a high pick in draft, but I could see it being one of my top 20 cards and not filler. 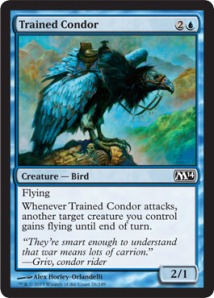 A 2/1 flyer is so so in this format, but the ability to give a 7/7 trample Garruk’s Horde flying is a plus. If your opponent has no flyers the Condor and his “wingman” could make short work of their life total. A turn 4 creature like Water Servant would be great, but just about any big creature you give flying will be value. Without good creatures to support this ability he might only be a so-so flyer and card 20/23, but if you have some good creatures to combo him with, consider picking the Trained Condor up a little bit earlier in draft.

If you haven’t noticed, there is a severe lack of tempo cards in M14. Most notably is the absence of Unsummon. With cards like Azorius Charm being the main “unsummon” type of effect in standard right now, I’m kind of glad to see Unsummon rotate out in September. Decks that like to frustrate you with Unsummons and charms while they attack with Geist of Saint Traft or other nasty creature (I’m looking at your UWR tempo/flash) will lose a little bit of power. Time Ebb is definitely better than Gatecrash’s Totally Lost if you’re targeting a creature, but it’s much worse than Unsummon as well. In limited, I think it will still be a timely way to remove an obstacle to your win, so consider it as a 23rd pick in sealed/draft to frustrate your opponent with.

An unblockable 2/2 creature for 3 mana. What’s not to like about this guy? Solid card, maybe even a top 10 pick depending on what your strategy is. He’s really good with enchantments, so just load him up and swing hard. Otherwise still a top 15 pick. 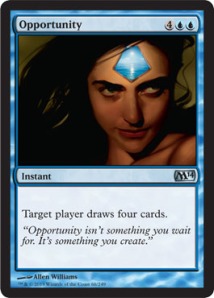 Four cards in limited can create a huge swing in momentum, especially around turn 6 where you could be flooded with mana or in need of some more gas to push damage through for a victory. Another solid card that would be in my top 20 picks.

Hey! An Innistrad block card got reprinted! He’s not bad in limited at all. A 2/3 flyer with flash will definitely surprise your opponent when they attack with their 2/2 or other creature thinking it will hit and then you put the Seakite in there and block. Time it right for the best value. I’d probably take this card as my 12th choice in a draft. Good in sealed too of course.

I feel like this 3/3 flyer that lets you draw a card when it dies is fairly costed for a common card. It doesn’t seem too expensive, but not cheap enough to be broken either. There was a 2/2 that did something similar in RTR I believe (Runewing something or other), and I played with that in draft as well. This is card number 16 in your limited deck. Three damage in the air is nothing to scoff at, and being able to draw a card when it dies is also very useful.

Glimpse of the Future

Divination is probably better at drawing you cards, but if you don’t have it in your deck this is alright as well. Being able to go deeper into your deck and to throw away land cards you don’t need will make your deck more efficient in the long run. Not a high pick, but I might have one in there to help me fill out my last 3 spots if there were no better spots.

Speak of the Devil, Divination is back YET again. It’s been around for a very long time, and keeps doing what it does very well: drawing you cards. You don’t to fill your deck up with cards like Opportunity and Divination, but one or two in a creature heavy deck will speed things along. This is one of those peripheral cards that you want to slip into your deck after you already have a solid build with a few win conditions. If you have tons of good cards in your deck, definitely consider putting this and the other card draw spells in just to overwhelm your opponent. 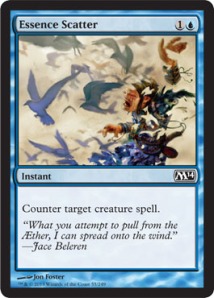 Control in limited is usually a bad strategy because you simply do not have enough cards to take care of decks that on average have 14 creatures or more. Creatures is the key word though. Essence Scatter lets you get rid of your biggest threat without having to waste any removal on it. Being able to counter a creature like Witchstalker (which has Hexproof) is going to be integral to your win. Slip as many of these into your blue deck as you can. You’ll definitely find some uses for it, just make sure you have enough offense of your own!

There’s our instant speed tempo! No Unsummon, and it may be one mana more than the card it’s replacing, but you get the benefit of returning just about any permanent to their owner’s hand. This means planeswalkers, enchantments, artifacts, you name it. This card was originally printed in Scars of Mirrodin, but didn’t see too much play thanks to Vapor Snag. Come September’s rotation I think it will see a lot more play. In limited, it’s a solid card and can really disrupt your opponent’s strategy. Returning a creature to their hand after it blocked a trampling creature is a good way to get value out of it. A top 20 pick. 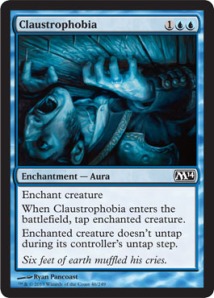 Blue doesn’t have any ways to deal with creatures permanently in M14, and sometimes putting it back in their hand or on top of their library is just postponing the inevitable. This card is much better than Disperse or Time Ebb if you get it. Throw it on their biggest threat and consider it pacified. This would be one or my first 10 picks in a draft if I was going with a blue deck.

Remember how I said that the M14 limited environment seems to have a lot of flyers (there are a few in all colors, and a lot in blue and white)? Well, this guy’s value suddenly went up. A 4/3 flyer is already pretty good for 5 mana, but being able to tap anybody in the air alongside him means that you’re going to be able to hit for 4 damage consistently. Sorry Serra Angel, but that vigilance won’t save you. 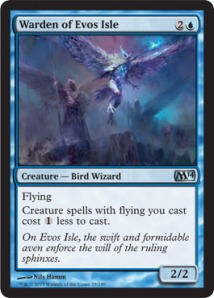 This card could absolutely destroy opponents if you get the right cards. Playing a blue/white Angel and Bird deck could get out of hand really quick if he was in play. By himself he’s a good card, but if you can throw in tons of flyers alongside him he becomes deadly. He’s probably the reason why they put so many creatures with flying into the set. Top 5 pick for sure.

This set is coming along a lot faster than Dragon’s Maze and it looks like I’ll be able to get everything done before Saturday. Tomorrow I’ll be posting Black and Artifacts, followed by Red on Thursday and Green on Friday. If you have any suggestions or disagreements, please feel free to post below. Check back soon!