M14: Playing to your Weaknesses – Black (and Other)

Today I’ll be covering the black cards as well as the cards that don’t fit into any of the colors. Black has been underpowered recently. Murder in M13 was a step down from Go For the Throat and Doom Blade, mostly because the double black mana in its cost made it hard to consistently cast. When you take the number of 3 color decks being played, that 2 black mana in the cost just doesn’t seem reasonable. M14 seems to have gotten a few things right, namely splashable (easy to cast) removal spells and more powerful creatures. Here are my picks for both black and the leftover cards. 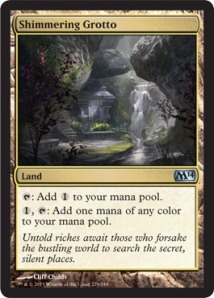 M14 doesn’t have the mana problems like the Ravnica block does, so it doesn’t need the dual lands to help play spells efficiently. Nonetheless, Shimmering Grotto is a good card to have as part of your 16-17 mana in a sealed/draft deck. There will be times when you have a double color cost you need to pay, or not having the color you need, and the grotto will come in handy then. 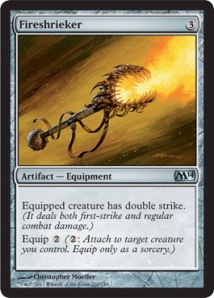 I like the Fireshrieker. While the power level seems a little higher for creatures in M14 than in past core sets, it’s lacking creatures with trample and anything that says “I win the game”. There are, however, an incredible number of flyers in M14 (see my white and blue articles). I believe that M14 limited games are going to be won in the air. Those with the more powerful air force will win, and Fireshrieker is a good way to gain the upper hand. Consider this as one of your 23 cards.

Blood Bairn is the new Bloodthrone Vampire, but a little stronger and costing one more to play. There aren’t a ton of expendable creatures going around, but if you play black green with some Sporemounds to get saporling tokens, or manage to get a Young Pyromancer along with some decent instants/Sorceries to make tokens with, this could be a powerful card. Even without those token makers, this is stills solid card that should be included in your 23 card black/X deck.

Accursed Spirit is 3/2 creature with intimidate, which basically means unblockable unless your opponent is playing black. It can still be hit with burn spells like Shock or other removal, but unanswered, it could single handedly win the game for you. Three damage a turn is a lot. I’d take this as one of my top 10 cards in a draft because of its evasion, and it would also be good in sealed. 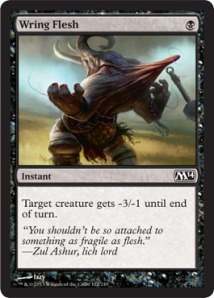 Wring Flesh is a reprint, and as alternate removal it’s okay. It is an instant which is incredibly useful in combat. If it can’t kill a creature, it can at least defang it so your creatures can team up and kill it in combat. Look for other removal first, but if you get a bad card pool, it wouldn’t hurt putting this in as a 23rd card instead of a crappy creature.

Tenacious Dead, or “Tenacious D” as he will probably end being called, is a card I would definitely recommend for limited. His cousin, the Reassembling Skeleton from M12, was a favorite of mine. Being able to continuously block and come back for more kept me in the game until I could get back in it. The drawback of this new skeleton is that you have to have 2 mana open when it dies or he’s gone for good. This shouldn’t be a problem later on when you have the mana, but be careful. It also works well with sacrifice effects such as Altar’s Reap. Not a high pick in draft, but I’ll probably keep a spot open for it. 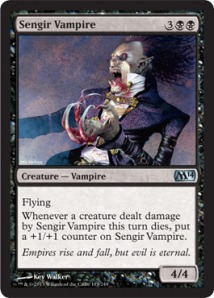 Good ol’ Sengir Vampire. When I first started playing Magic back in Revised, I thought he was the coolest card. 4/4 flying creatures were HUGE back in the day. Now not so much (in standard at least). He is still great to have in limited though. That 4 power and flying is going to be very useful. Opponents won’t attack with small creatures cause it will just make it bigger, and it will also be very hard to block. This would probably be my 12 pick in limited. Good cost, good power, good ability.

Quag Sickness acts as another form of removal. It can cripple large creatures and later on in the game it’s sure to kill whatever it enchants. Play this in a 2 color deck to be most effective though. It’s kind of worthless in a greedy 3 color limited deck when you only play 5 swamps. 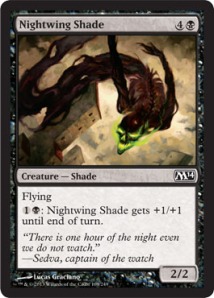 Nightwing Shade might seem a little expensive for a 2/2 flyer, but being able to pump a flyer up makes him worth playing. I wouldn’t choose him high in a draft, but he’s good to use as one of your last 3 choices in your deck. 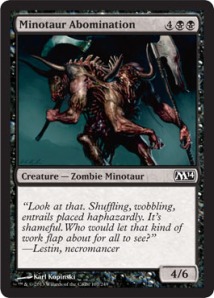 Minotaur Abomination is just a big body. 4 power will kill a lot and his 6 toughness will ensure that he is double blocked in battle. I’d take him as my 16th or 17th pick just so I could have a big hitter later in the game. You never want to be drawing those 1/1s on turn 8 or 9.

A dark ritual on a kill stick! woohoo! Liturgy of Blood will kill anything as well as give you 3 mana in the process, basically meaning it’s a 2 mana spell. It’s not necessary to use the extra mana, but it would be efficient to do something with it afterwards. This would definitely be part of my kill package in a limited format battle. Top 10 pick. 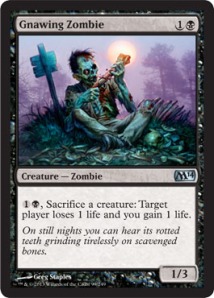 Gnawing Zombie has an interesting effect. He acts like a Blood Artist (AVR) to drain your opponent for 1 life when you sacrifice a creature. He has good synergy with “Tenacious D”, letting you sacrifice him and then pay to bring him back, but for 4 mana that can be a little expensive for 1 life. He’d work best with a token producer like Sporemound, but you should use this ability only if the creature is going to die anyways. It’s still not a bad ability on a 2 mana 1/3 zombie. He’s a good supporting creature and wouldn’t be bad filling out your 23 cards. 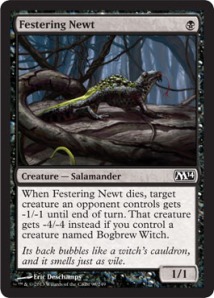 I like Festering Newt, even enough to take it as one of my first 15 cards. Being able to block as well as give -1/-1 until the end of turn adds some strategy to those first few turns. While it will trade life with another 1 toughness creature, you also have the choice to kill another one toughness creature or to weaken one after the attack so you can finish it off with a burn spell or something like a Wring Flesh. I’d probably stay away from the combo with the witch though. The newt is better than either of those other cards, and those spaces would be better served with another creature or removal I think. 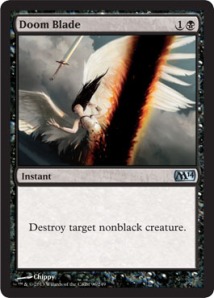 It kills at instant speed, it costs 2 mana, it can be splashed … If you don’t pick this up as quick as you can you’re going to be sorry. Pick it up when you see it in draft or you won’t see it again. It’s worth splashing black in your deck to cast this as well. It’s he best removal spell in the set.

Corrupt is one of those cards you might skip over at first due to its cost. But it basically becomes a late game bomb if you draw it. This is the card you hold on to until the last possible moment then hit your opponent with it to swing the momentum back in your favor.

Child of Night is a no nonsense 2/1 vampire girl with lifelink. She’s nothing special but will block and attack for you when you need her too. A good card to round out your deck with.

Black is full of solid cards and you should see quite a few black/X decks in sealed and draft. It has a good number of removal spells and the creatures are better than in previous core sets. I want to apologize for not posting on schedule. There was a family emergency and I’ve been out of town all week. I did this entire post on an iPhone and it has been painstakingly slow. Look for red later today, and green on Saturday. Thanks for reading and comments are welcome as always.