M14: Playing to your Weaknesses – Red

I apologize for not following through with my promises again. I thought I would be able to get all of my posts out this week before the pre-release but due to unforeseen circumstances I was out of town all week attending to family matters. It’s the risk I take running this blog because I provide the sole content. That means when I’m not able to post, nothing happens for a long time. I want to thank you that have stuck with me and continue to follow my blog. Though there will be slow times every once in a while, I will continue to update this website for a very long time. Today I’ll be covering Red, so let’s take a look at what the fiery color brings to the limited table. 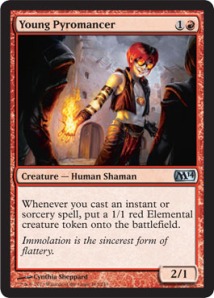 Let’s start off with what will probably be the BEST uncommon in the set. The Young Pyromancer has been making waves around the net already and the buzz is continuing to build. Why is everybody excited? In a spell heavy deck the Young Pyromancer can be insane. In limited it won’t be as good, but basically turning all 23 cards into creatures (including your Doom Blades or Shocks) will give you one heck of an advantage. Is this a card you build a deck around? Well, yes and no. I wouldn’t go as far as to put in 22 spells and him into a draft deck, but you won’t have to worry about leaving out a creature when putting 6-8 spells and 17-15 creatures into a deck. Pick it high in draft, and it should be one of the first cards that go into your sealed deck. 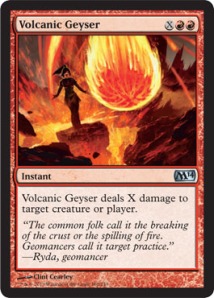 It’s at instant speed, it targets creatures or players, and it’s a late game win condition. This is a very good removal spell in limited, and I would probably take it as one of my top 12 cards. With a slower game in sealed and draft, that means you’re going to have a lot of extra mana around to cast this with. Don’t pass this up. 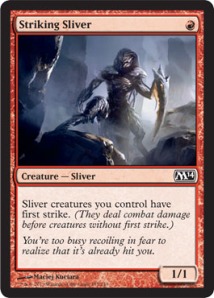 There are going to be quite a number of slivers in the packs you open, but not all of them are created equal. If you’re drafting, you might be able to draft a sliver deck, but most likely it will be 2-3 colors because somebody else will be taking them as well. The strongest sliver colors are Red, Green, and Black. Any combination of two of those should make for a pretty strong deck. But what if you just have a hodgepodge of Slivers and they aren’t all in the colors you’re using? Well, this guy is one that you probably want in your deck. A 1/1 first strike creature is pretty good, and if you can give it more bonuses the better. Green would be good with him especially. I wouldn’t take him high in draft unless it looks like you’re going the Sliver route, but getting him 14th or 15th pick to supplement your red deck wouldn’t be bad. I could also see it being a good card in sealed, so consider using it in your 23.

Great first turn kill spell. It will take out just over 50% of the creatures in the set, and also give you some strategies to block and kill thanks to being instant speed. If you’re playing red this should be one of your first picks. Great card to go along with the new Young Pyromancer as well. Top 10 choice in draft, also one of the first cards I would include in my sealed red deck.

I said that the battle for limited was going to be fought in the air, and this card just goes to show you how true that is. Every color has been given some way to dealing with flyers be it creatures of their own, enchantments, or creatures with reach. This is a pretty sweet card. It gives your creature Giant Strength (+2/+2), Firebreathing (+1/+0 for red), and flying. For the number of abilities you get, this is pretty good value. This card will power up any creature nicely. I’d take it early in a booster draft (7th or 8th card), and I think I’d include it in my top 20 sealed choices too. Just be careful not to have too many spells and enchantments though.

A glass cannon (high power, low toughness), but for 3 mana I’ll play it. If they have no way to block it you can really hurt your opponent with 4 damage. It also trades VERY well with 70% of the creatures in the deck if you block with it. The firecat would be my 13th choice or so in draft, and I would definitely include it in my sealed. Solid card.

I don’t think it really matters if you have the Advocate or not. Attacking for 5 each turn is great, and they’ll have to use at least two creatures to block and kill it, but be careful if you don’t have enough creatures to support him with. Having blockers to allow him to swing every turn without fear of reprisal is smart. Not a super high choice in draft, but I think he’s a strong 17th choice in your 23 card deck. 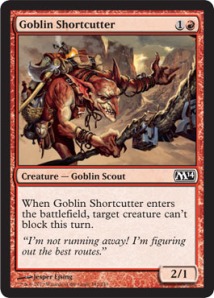 A simple 2/1 for 2 mana, but he can sneak some damage in for you when he enters play by stopping a blocker. I wouldn’t feel bad about having him in my 23 cards, but I wouldn’t take him early in draft. He’d be a good card to round out your 23 with.

Flames of the Firebrand

If you have the Pyromancer’s Gauntlet, this will be an absolutely INSANE card (well, any red spell would be basically). Being able to spread 1-3 damage out between 1-3 targets is very useful, and if you can up it to 3 for each with the Gauntlet it would be great. Don’t count on getting the gauntlet, but definitely pick this card up early in draft and have it in your sealed. Taking out 1-3 creatures with one card is HUGE in limited.

Flyers are going to be big, so you NEED to be playing this if you are going with red. If anything it’s a chump blocker, but I think this dragon will become clutch in certain match ups where you need to pump him up and block a big flyer. You might be able to let him go around the table a few times in draft, but don’t let him go around too long. Pick him up as your 7th card, and in sealed definitely include him in your top 20. He’ll be a lot more important than he was in past sets. 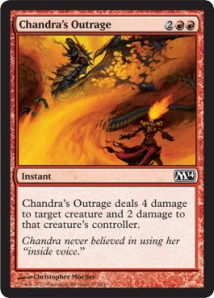 This card is much better to have in your main deck than Lava Axe. Killing a creature with 4 toughness or less and dealing 2 damage to a player is pretty good value in limited. This is a creature heavy format, so I’d take this card as one of my first 3 choices. This is probably the best red burn spell in M14 next to Flames of the Firebrand. 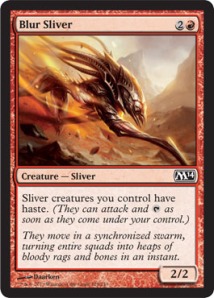 As with the Striking Sliver, this card would be great with other slivers if you have them, but by itself it is still a decent 2/2 creature with haste. With multiple slivers I’d probably take it as one of my first 13 cards, but otherwise I think it would be a 18th pick in my sealed deck. Decent card not matter what though.

There is always a card with great flavor in each set, and Barrage of Expendables wins that honor for M14. It’s a cheap enchantment, it targets creatures or players, and it gives you an alternate win condition against an opponent if you can keep making tokens with cards like Sporemound or Young Pyromancer. The draw back is having to pay the red mana, but that shouldn’t be a problem later on in the game. This is a great card to get extra value out of your chump blockers with. Block a big creature, and before they die sacrifice them and deal that damage! You need the creatures to be able to do this though, so if your deck is creature lite it might be better to keep it out of the deck. Otherwise, it wouldn’t be bad to run this in lieu of a burn spell like Lava Axe or some other form of removal. Top 10 card no. Top 20? Yes. 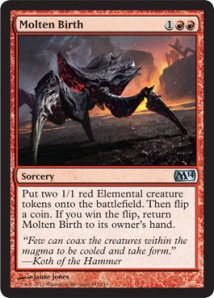 This card already gives you great value by putting 2 1/1 creatures into play with one card, but being able to possible get the card back to do it again with makes it even better. Great for combos with the previous Barrage card, but I think it would fit in any red deck. I’d take this as one of my top 10 cards in draft, and it would definitely be a part of my sealed deck.

Coming up next time

I’ll be busy with the pre-release tomorrow but green WILL be up Saturday night (Saturday afternoon for most of you in the USA). This should be useful for anybody playing on Sunday, as well as anybody playing late night or later in the afternoon on Saturday. I hope this advice helps you out and lets you get a few more wins than you usually do. Thanks for reading and check out the final PTYW tomorrow!