It seemed unreal at the end of day 1 in Kitakyushu – Three of my friends had made it to Day 2. I was pretty happy for them. Two were using Jund midrange, and the other Naya midrange. At the beginning of day 1 at the Grand Prix, the field was littered with plenty of Jund and Naya midrange, GR aggro, Esper, Bant, and UWR control decks, but as the rounds went by, less and less control decks were left in the running. On Day 2, aggro decks such as Big Gruul were out en masse, as well as Jund. Nobody was safe. My friend Isamu who sneaked into day 2 with a 7-2 record needed to win them all to get to the top 8, but he quickly dropped to 8-3 and was fighting for the top 64 the rest of the day. Every round was a Pro Tour Qualifier level game, and he only managed one more win for a 9-6 record and 114th place. My friend Dai did a little bit better. There were some tough games and even more crushing losses, but he ended up with very respectable 35th place with a 11-4 record.

The last chance for Nagoya players was Nomura Ryosuke. Ryosuke was really on his game Saturday and Sunday, and when the dust settled after round 15, he was at a 13-2. But was it enough? I was playing in the Super Sunday side event and right before the 6th round I heard his name announced. Rock on! Somebody from Nagoya had made the top 8! And a good friend of mine as well!

The other dozen or so Nagoya players that had washed out on Day 1 were ecstatic. We all know him, but who is Nomura Ryosuke? I’ve known him for about a year and a half. He was born Nagoya and has been living there for all 26 years of his life. I believe I first met him during the Scars of Mirrodin/Innistrad block. He kicked my ass a lot in those first few meetings. He tends to play beatdown decks more than anything else (his zombies deck back during Dark Ascension standard was brutal). Nomura is by no means a Magic genius, but he is a very hard worker. He plays with very few mistakes, has a good intuition, and can read the metagame well. If you’re not playing your best, he will take advantage of that.

His deck of choice for Grand Prix Kitakyushu was Naya midrange.

Nomura’s deck was full of bombs. Thragtusk, Thundermaw Hellkite, Boros Reckoner, and Huntmaster of the Fells gave the deck a lot of threats, but it also puts his average casting cost at about 3.4 mana. He’s also using Warleader’s Helix instead of Mizzium Mortars to take out those 4 toughness creatures. This is probably the reason why he decided to go with 26 land in his deck. Hitting his curve in this deck was incredibly important. I had a chance to watch a few of his games in the Top 8, and he had some amazing keeps. Thundermaw, Thundermaw, Voice, Boros Reckoner, 3 mana . . . he was always able to cast 2-3 things in his hand in the first few turns, and with 26 mana total the odds that he’d draw the mana he needed to cast his cards was pretty good.

Against Koichi Kodou’s Big Gruul deck in the semifinals, Nomura took the first game by attacking with a Thragtusk and Thundermaw Hellkite, cast a Selesnya Charm on his Thragtusk to give it +2/+2 and trample, then used Reverberate and put the copy on his Hellkite for the win.  His next game was close, but he got stuck with 2 Ray of Revelations in his hand (I’m guessing he was worried about Burning Earth) and couldn’t push through the last few points of damage. In game 3 he kept a 2 mana hand, thinking that he would draw one or two more lands from the remaining 53, but Kodou hit him early with a pair of Strangleroot Geists and all Nomura could muster was a 2/2 Knight token, which wasn’t enough. 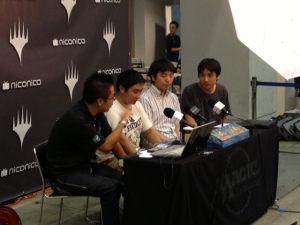 Nomura being interviewed on NicoNico Douga after the semifinals

After his semifinal game, I sat down with him to ask him his thoughts on the current Magic environment in Japan.

The Japan Hobbyist: Congrats on your first top 8 appearance! Why did you decide to play with Naya midrange today?

Nomura Ryosuke: I’ve been playing with this deck for the last 2 months and know it well. It’s easy to understand, and puts a lot of pressure on my opponent.

The Japan Hobbyist: There were a lot of Jund, Gruul, and GB control decks this weekend – how did your deck match up against the metagame?

Nomura: This deck did really well against UWR control, Big Grull, and GR blitz decks this weekend. It struggled against Jund midrange though. My only 2 losses came from Jund on day 2. Green/Black control also gave me some headaches.

TJH: I haven’t really asked you before, but how long have you been playing Magic the Gathering?

Nomura: I played casually from Mercadian Masques, but have been doing standard for 3 years, since Rise of the Eldrazi.

TJH: I’ve been working to help non-Japanese players become acquainted with how the game is played here in Japan. I’ve come across a lot of different players and I’m hoping to debunk some myths about the Japan Magic scene. What would you say affects your deck choices? Are you influenced by the metagame or do you stick to one type of deck?

Nomura: I use the best decks in the format then practice with it until it becomes second nature. It could be aggro, control, midrange – it doesn’t matter. I play the type of decks that are winning. 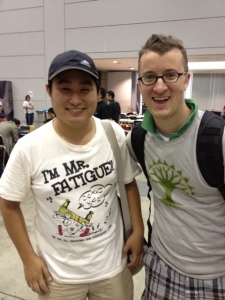 Nomura and I before the semifinals

TJH: I’m pretty excited to be from Nagoya. I always thought we had some really good players from there, and now I feel somewhat vilified after two top 8 appearances by non-pros in GP Kitakyushu and GP Nagoya. How would you rate the level of competition in the Nagoya area?

Nomura: I agree. I think there are some strong players there. We have at least a dozen professional level players in the area, and the overall level of players in Nagoya is pretty good as well. It’s not as strong as a bigger city such as Tokyo, but it’s a good place to refine your game and to become a better player.

TJH: What competitions will you be doing in the future?

Nomura: With the top 8 appearance, I’ll be heading to the Pro Tour this year, but I’m also looking forward to Grand Prix Kyoto in November, as well as the Magic Market Open in Nagoya in September.

TJH: I wish you the best of luck in those events. I’d like to get a Japanese player’s point of view about Theros and Theros standard at the end of September. What deck types are you looking forward to the most after rotation?

Nomura: Green/White Aggro. Definitely. That combination of colors has some powerful cards.

TJH: Are there any cards that you think will break out in the Theros metagame once all these Innistrad block cards are gone?

Nomura: Voice of Resurgence will only get better with Pillar of Flame and Oblivion Ring gone, Sphinx’s Revelation should see a lot more play as control makes a comeback, Scavenging Ooze is value all around, and I even think that Scourge of Valkas could see more play.

TJH: Last question: What does the future hold for you? Will this be your high point?

Nomura: I hope not. I plan on playing competitively for at least another 5 years, and then after that I’ll probably continue to play Magic casually with friends.

I want to thank Nomura-san again for his time as well as for his insight. It’s great to know that non-professionals can make the top 8 at a Grand Prix through hard work and playing their best. Be sure to follow him at the next Pro Tour (Journey into Nyx I believe). Thanks for reading, and if you have any questions you’d like me to ask pro and semi-pro Japanese players in the future, please leave a comment below and I’ll work it into my next interview. See you next time!