TJMGD: Grand Prix Kitakyushu – Learn to Walk Before you Run 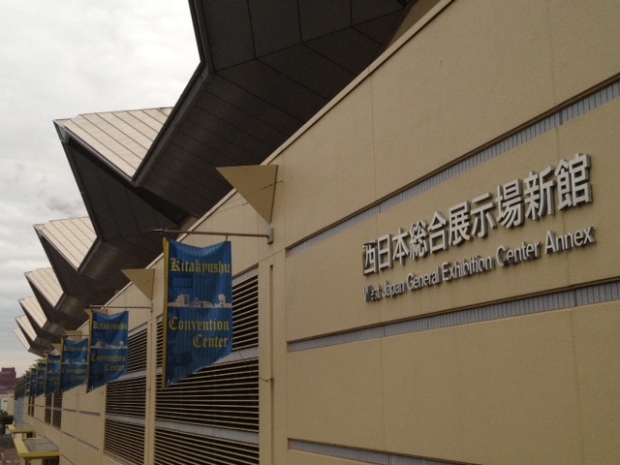 It’s hard to accept failure. You try so hard, for so long, and you fall short. When I was in high school I played for my school’s soccer team. We were the “ghetto” school, pretty much what you’d consider one of those teams from a Disney movie that is horrible at the beginning like the Mighty Ducks but then become great by the end.

Except Magic the Gathering isn’t Hollywood. Things don’t always turn out that way.

Legends can be forgotten, gods can be struck down from their place up on high, and aspiring Magic players looking to break into the big leagues can fail miserably time and time again before finally making it into the limelight. Grand Prix Kitakyushu just wasn’t my time. I went into the GP with two byes that I had earned by winning a Grand Prix Trial (as well as getting over 750 points by grinding). I have improved GREATLY from the beginner that I was last year. Going into the tournament, I had reached out to my friends and the Magic groups I was part of in hopes of improving my GW tokens deck. One person heeded the call and decided to help me; Mitch Burns from my hometown in Indiana. We worked tirelessly for 2 weeks prior to the GP to come up with a competitive token deck, tuning it and testing it ourselves, and this is the build we came up with —

It’s a pretty sweet deck to tell the truth. I handed my original list, which used 8 mana creatures, to Mitch and the first thing we decided to do was to drop them. There were too many turn 3 Bonfire of the Damned ruining my games, and they didn’t trade with ANY of the aggressive creatures. For that reason, we decided to play a strong curve instead that allows us to put increasing pressure on our opponent  every turn. That’s one of the reasons we added in Dryad Militant. It trades with most early attackers, and is great against control decks. Mitch also thought it would be a good idea to add Farseek in order to accelerate into a turn 3 Advent of the Wurm or turn 4 Garruk, Primal Hunter. Farseek also filters out those lands so you don’t get mana flooded late in the game.

Watanabe reacting to an Ethereal Armor being played on Day 2

His biggest contribution was the addition of Selesnya Charm to the mainboard. It has so many uses in the current metagame. It’s good against control as a flash creature. It can remove a creature such as Thundermaw Hellkite, and it can give trample to one of your big creatures/tokens. It’s easily one of the key cards of the deck. The idea behind the deck is to to get an elemental token from Voice of Resurgence out as soon as possible and then to populate it until you have an army of X/X creatures that your opponent can’t deal with. It has a very low curve of about 2.5 mana, meaning you can cast almost anything in the deck with a Forest and a Plains. I think it can be a great deck, however, it’s not ready yet.

People say that you shouldn’t take untested decks into a big event, especially if you’re not used to it yourself, and I fell into that trap. I thought because it was similar to my previous builds that I would be fine, but I found myself making a few misplays here and there that would have won me the game and got me into day 2. Instead, I finished 5-4 and in 393rd place out of 1183 players. Here’s how the deck played against the field:

Round 3: Kibler Gruul – Won 2-1. With all the life gain in the deck and tons of creatures to block with, I was able to stall my opponent enough and get him to use up his cards while pressing my advantage with populate and wurm tokens from Advent of the Wurm. I filled up my deck with Unflinching Courage and the 2 Celestial Flare. In game three I had 2 Selesnya Charm and a Celestial Flare in my opening hand, and drew another one in the first few turns. I was able to removed a blood rushed Flinthoof Boar, Celestial Flare a Boros Reckoner, and then take advantage form there. (3-0)

Round 4: Gruul Blitz – lost 1-2. This was a game I should have been favored in, but I ended up drawing nothing but land with Trostani, Selesnya’s Voice in play and double Hellriders spelled my doom in game 3. (3-1)

Round 5: BRW Aristocrats – lost 0-2. This game frustrated me immensely because people had told me I didn’t need Rest in Peace in my sideboard. I could have totally shut down my opponent’s triggers from Blood Artist and won after sideboarding. However, I instead took 15 points of damage on turn 5 in game one, and in game 2 I took 19 damage on turn 6 thanks to a Boros Reckoner + Blasphemous Act which were the perfect amounts of damage to kill me. Rest in Peace is staying in my sideboard until rotation. I probably should have sided in my Oblivion Rings. (3-2)

Round 6: Bant Hexproof – won 2-0. I’ve had lots of practice against Bant Hexproof and beat one at my GPT before winning the whole thing. I took the first game with Scavenging Ooze and Elemental tokens from Voice of Resurgence with Trostani in play, and in game 2 he mulliganed to 4 cards and couldn’t play anything until my Loxodon Smiter had him to 8 life. (4-2)

Round 7: Jund Midrange – lost 1-2. This was another deck that I had a lot of experience playing against, but my lack of experience with the deck led to my downfall. I had put in Garruk Relentless from my sideboard and took out Rancor. This let my opponent chump block and stay alive at 2 life before coming back with a Thragtusk and finishing me off with a huge Kessig Wolf Run attack the next turn. (4-3)

Round 8: Jund Midrange – lost 1-2. I had kept it together all day but at 4-3 I started to make some bad decisions. I had the upperhand in this game, but allowed my opponent to get back into it by keeping only green mana in my hand with Scavenging Ooze, two Charms, a Voice of Resurgence, and Loxodon Smiter. I never drew my white mana, which led to the loss. (4-4)

Round 9: BR control – won 2-1. I was worried about the Mutilates, but other than that I thought I could overpower my opponent and cause him to run out of removal spells thanks to all of my tokens. I took the first game easily with an aggressive hand, but my opponent evened the match at 1-1 when I took a Master of Cruelties’ attack and ended up with a Searing Spear in my back a few turns later at one life. A turn 3 Advent of the Wurm token (thanks to Farseek) let me take advantage of the game early on in game 3, and when my opponent’s Vampire Nighthawk got taken out by my Oblvion Ring he was pretty much done for. (5-4)

Better play against those two Jund decks could have raised my record to 7-2 for a day two appearance, but it wasn’t meant to be. This deck has a lot of potential, especially since it will be largely intact after the rotation, but you need to give yourself enough time to play with it. I only had enough time to test it out at Friday’s Foiled Again tournament and against a few players here in there in between rounds, and it just wasn’t enough. As the title of my article reads, you can’t run before learning to walk. This deck needs to be tweaked and optimized.

After some tough competition and a humiliating Super Sunday tournament, changes needed to be made. Here’s the next version of Be Fruitful and Populate

I dropped a Gavony Township and a Forest and added a Plains. The 2 spot is a lot busier now, and getting that second color is more important than my previous build which was using the mana base from the deck I had with the mana creatures before the Grand Prix. This could have been why I  sometime had problems with the mana. With a mana curve of 2.5, I think I can get away with 23 lands.

I dropped the Dryad Militants in favor of Call of the Conclave in the 2 spot. The Dryad was nice, and was aggressive against control decks, but there simply aren’t enough of them in the metagame right now to justify keeping them in deck. 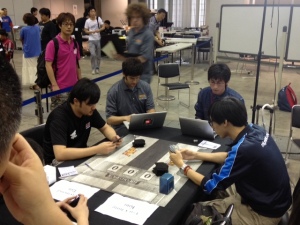 Tan Vs. Kuo in the semifinals – Hexproof x2

There were a lot of changes here. As I said before, I wanted more power early on, and Call of the Conclave is great. This gives me a possible 16 choices to play on turn 2 depending on the situation. The problem is that most of these spells need white, and without a dual land or a plains in play, that could be an issue. That’s why my new build is testing out Caravan Vigil. If I get stuck on one land in my opening hand but have tons of 2 drops, this card will let me correct that problem. It can also act like a 1 mana Farseek of sorts later on in the game if a creature dies thanks to it’s morbid ability. I still think cards like this are important to filter out your deck and reduce the possibility of mana flooding. It also lets you put your mana into the battlefield untapped if you haven’t played a land yet that turn.

I also went up to a 3rd Rootborn Defense in the main deck to stop any wrath effects like Supreme Verdict.

I took out the Garruk Relentless and Rootborn Defenses and in their spot put in a Brave the Elements, Sundering Growth, and 2 Vitu-Ghazi Guildmage. Brave the Elements seems like a good card to help me get around removal, as well as to push damage through against decks with lots of chump blockers. I’ll probably try out more in the main deck in future builds. I put Sundering Growth in as another card against Bant Hexproof. Being able to turn their flying attacker into a ground attacker so I can block with my Wurm token or zapping their Detention Sphere off my Garruk Primal Hunter seemed useful, it also populates.

The Vitu-Ghazi Guildmage seemed like a good idea against control. It’s a great mana sink later on in the game, and can populate without wasting a Rootborn Defense or tapping like Trostani, Selesnya’s Voice does. Popping out a 3/3 creature at will can be pretty useful, especially since it can also block and attack.

What the Future Holds

I’m looking to bounce back from my 5-4 performance at GP Kitakyushu and to take this new build to the Magic Market Open happening in Nagoya on September 15th. The MMO is a regional tournament that will attract 200+ players from around Nagoya and the surrounding prefectures and should give me a good test of the deck’s capabilities. GW tokens is set to become a top tier deck after rotation I think, even with the reprinting of Ratchet Bomb (thanks to Rootborn Defense). This deck will only lose about 20% of its cards, and most of them will be replaceable with M14 or other Ravnica block cards. Having only 2 colors allows you bypass decks using Burning Earth, and also makes it much easier to draw the cards you need. This deck isn’t done yet, but look for it to start dominating again in the future.

(Special thanks again to Mitch Burns who helped me work on this the last few weeks!)

One thought on “TJMGD: Grand Prix Kitakyushu – Learn to Walk Before you Run”