I’ve been drowning in work since my summer vacation ended, as well as madly preparing for GP Kitakyushu. I continue to evolve my deck and I feel pretty confident about it. I’m leaving on a plane tomorrow morning at 11 am and will arrive in Fukuoka prefecture at close to 1pm. I’m going to be gone for 4 days, which means I won’t be able to post a new article the entire time. That’s why I’d like to leave you with another new Magic Store I visited in Hamamatsu, Shizuoka the other week.

If you’ve been reading my blog since the early days, then you might remember that the first store I visited in Japan was Master’s Guild in Hamamatsu City, Shizuoka prefecture. It was a friendly place, I learned a lot of Japanese vocabulary there, and met my first few friends in Japanese Magic. That was over 2 years ago though. Since then, Magic has grown in popularity in Japan (amongst other card games), which has led the owner of Master’s Guild, Mr. Tomimoto, to open up a new shop this year. 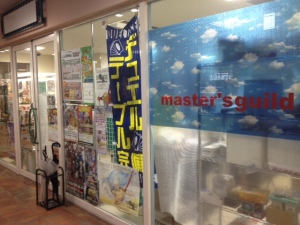 The new store is set up a little differently from the one near Kamijima station (on the Entetsu line). If you’ve been to the original store, you’d know that there are no cards in cases there. You have to look through folders and folders of cards to find the one you are looking for, and it can be a real pain in the ass sometimes. It hurts if you just want to browse through cards.

The Hamakita store is more like your traditional store, with tons of cards in cases, as well as other singles and foils in boxes. While I was there, I picked up a foil Japanese Dryad Militant for 300 yen. They retail for $15 online! They definitely have a good amount of product there. 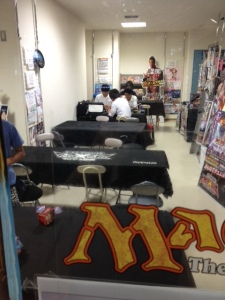 There play area is small, but being in a smaller area of town I think it’s just fine. For the people in the northern countryside area of Hamamatsu, it’s a great place to stop in and hang out with friends. They can fit about 18 players here during a big tournament. Speaking of which, they have Friday Night Magic every week. The 1st, 3rd, and 5th weeks are Modern format, and the 2nd and 4th weeks are Standard. If you want to play on those other weeks, go to the original store near Kamijima Station – the original store has a 4pm and 7pm FNM every week for standard.

Why should I go here?

The Hamakita store is better for browsing single cards than the one on Akiha highway is, and they are the only place that have a boxes of singles and foils to look through. The focus is a little more on Magic here than the other place. The prices are still a little high, but being only the 3rd Magic store in town (of 800,000 people) lets you control the prices somewhat. It’s also pretty easy to get to compared to the other store (which I’ll get into in the next part). If you’re in town for a weekend and want to browse, I think it’s worth the train ticket price to see it and look for good deals. Master’s Guild holds Pro Tour Qualifiers from time to time, and there was even a Grand Prix in Hamamatsu back in 2006. If you’re in town for those, check this place out.

The store isn’t much, but if you’re like me and lived in the countryside for 3 years with NOTHING to do, a store like this is a god send.

This store is relatively easy to find. Let’s assume you’re starting from JR Hamamatsu station. There are two exits. If you’re coming off the local line or shinkansen, take a right and head outside. This is the exit facing the bus terminal. Turn left once outside the station and walk about 5 minutes to Entetsu SHIN HAMAMATSU station. This is the station right after you walk between two large department stores.

Buy a ticket for Hamakita station (I believe it’s around 300 yen or so), and hop on the next train. It’s about a 20 minute ride to Hamakita from Shin Hamamatsu, so enjoy the view. Once you arrive, take the only exit out of the station and look in front of you. There is a large building/community center called Hamakita Nayuta. I believe there is a Mos Burger restaurant on the first floor of this place. There should be a shopping area with various stores on the first floor behind the Mos Burger, so walk around it and look around. Master’s Guild Hamakita should be close to where the stairs are on the first floor.

They also rent out a large room here during pre-releases to host 50+ people events, so it’s good to remember where this location is for future reference.

Coming up Next time

GP Kitakyushu is in 3 days! I’ll be tweeting live from Fukuoka starting 10 am Saturday (Japan time), or about 9 pm Friday if you’re in the USA. Be sure to check my tweets (@yoschwenky) after Friday Night Magic for an update. Thanks for reading, and be sure to check back after the weekend for a recap of the Grand Prix!

← Jund No More – my prep for GP Kitakyushu
TJMGD: Grand Prix Kitakyushu – Learn to Walk Before you Run →