Talk the Talk: A MTG vocab lesson in Japanese (+ a store profile)

I thought it would be useful to all those starting to play at Japanese hobby shops to know what each ability or term is in Japanese. With a basic understanding of hiragana, or even just the romanized version of the word, you should be able to play a match in Japanese. A good amount of the players will know some of the terms in English, and some of the judges will be able to speak English a little, but for the most part you will be on your own. In my own experience, if you already know the cards abilities by heart, it is incredibly helpful. Knowing the vocabulary in case you need to explain something or understand what the other player is doing is useful as well. Recently I’ve done entire matches speaking no other Japanese at all except for the card vocabulary, so don’t be too intimidated by playing in Japanese.

Also a warning before you continue reading. Make sure that your OS supports viewing of Japanese characters or else you won’t be able to see the kanji/hiragana characters that are used on the Magic cards. The examples are also entirely in Japanese hiragana. If you want the romanization for those please let me know and I will post an update later. If you see any mistakes in the Japanese spelling, please let me know! (These vocabulary words cover everything from the Scars set to Dark Ascension).

The main phases are pretty much all the same, such as untap, upkeep, main phase, 2nd main phase, end step. The vocab you will  need to know for attack is as follows.

The card types are all the same too. Artifact, Creature, Instant, Sorcery, mana, planeswalker, Enchant-Aura, Enchantment. The types are written in Katakana for those who can read it, but they are pronounced relatively the same way as their English counterparts. とち（土地 = tochi) is land.

Here is a list of the abilities found on most cards, or at least those that are currently found in Standard play. If you have any to add, please leave me a message after the post.

It would also be useful to know how to attack, or should I say how to deal damage.

Playing during a certain phase:

Sometimes you might want to play an instant or activate an ability during a certain phase, or before one. As stated above, most of the Magic players use the English names of the phases while playing. When you want to do something, you can say “____ (phase name) no mae, ____ oh shimasu.” This means “Before this phase, I’m playing this spell”.

Most Japanese players in the bigger cities should know these words, but if they don’t you can always ask for a judge to help.

I hope this explanation wasn’t too confusing. If you take anything from it, the vocabulary would be the most important. If you are a beginner of the Japanese language and living in Japan, this would be a good way to practice your Japanese. Good luck with your gaming!

(UPDATE: If you’d like the most up to date list of vocabulary, please visit the tab at the top of the page! https://thejapanhobbyist.com/current-magic-the-gathering-vocabulary-in-japanese/)

But wait, today’s update isn’t finished yet! Before I sign off for today, I’d like to mention Master’s Guild in Hamamatsu city. If you want to play Magic and live in the west part of Shizouka prefecture, your only choice for gaming is at Master’s Guild near Akiha highway, close to Hikuma station on the Entetsu train line. There are actually a few ways to get there. The easiest way is by car. The 2nd easiest is by bus from Hamamatsu station. and the 3rd is by train=walking.

BY CAR: The address of the store is 433-8122, Shizuoka-ken, Hamamatsu-shi, naka-ku, kamijim 6 chome 1-41. Their phone number is 053-479-1744 if you get lost. In Japanese this is 静岡県浜松市中区上島６丁目１−４１。Pop that address into your GPS and find your way there from wherever you live. Parking is kind of hard to explain, so call ahead and ask or pop in once you arrive to find out where the parking is.

BY BUS: From Hamamatsu station Bus Terminal, go to bus stop #13 and take the # 53, 56, or 57 bus (usually leaving around 24 and 54 every hour). DO NOT TAKE THE #50! That bus goes to a different place. Once you are on one of the buses, you will ride for about 15-20 minutes (depending on the traffic) and will get off at the Yaguchi (谷口）bus stop. It will be very close to a gas station, and next to that Gas station is Master’s Guild. I believe the cost of a bus ride is about 300-400 yen, maybe cheaper.

BY TRAIN/FOOT: This is where things get trickier. I have never walked on foot, but I have rode my bike there and followed half of these directions there with no problem. Take the Akaden (Entetsu Train Line) to Enshu Hikuma station. There should be a stop light near the station as you get off. Continue north from the stoplight until you reach the next stop light and take a left. This should  be the 2nd left from Hikuma station.  There is an Elementary school at that corner (Kajima Elementary school). If you don’t see it, you went the wrong way. Walk along the elementary school and past it until you get to another stoplight at a 4 way intersection. From there continue straight on the same road (though it might curve off a little to the right). If you see the Lawson Convenience store you are on the right path. Continue walking for another 5-10 minutes or so until you reach the underpass for Akiha highway. After passing under the highway, you’ll see a small parking lot on the right side (Master Guild’s parking) and on the left side you’ll see a small upward path. Walk up the path to the highway level and turn left. You should see a building on your left side next to a gas station with lots of game posters in the window. Congrats, you found it! 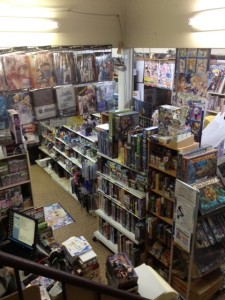 A gamer’s paradise in Hamamatsu

Having lived in Hamamatsu for a total of 4.5 years, The Master’s Guild was my first experience with a Hobby Store in Japan. Hamamatsu is a city of about 800,000 people, but the city is so spread out it’s difficult for people to get around, especially without a car. Perhaps that’s why there is only one store catering to MTG players in western Shizoka prefecture. You can buy cards in various other places, but this is the only place you can play FNM and various other tournaments such as Magic Game Day and pre-releases. MTG isn’t the only game they offer though. They host every other currently popular card game such as Yugi-oh and what not. Their collection of board games is also quite impressive, and they have some games in English as well. Want Settler’s of Catan? There is a good chance they have it or can order it for you! They also have a wide variety of accessories for the card collector too.  The staff are friendly and some of them have a limited comprehension of English.

As far as prices are concerned, there are some good deals and some things that are a little overpriced. There is also a regular price for goods and a member’s price for goods. In order to get the member’s card you have to pay a one time membership fee of about 500 yen (I think). After that you get the member’s price. An example would be a pack of cards. One pack of Dark Ascension would be 400 yen regularly, but with the member’s price you’d get it for 380. In my opinion it’s a little expensive but at the same time they have a great selection of cards and goods at this shop.

They do sell single cards, and I’m guessing they also buy some, but I’ve never had experience doing it so I can’t give you any information about their policies. If you sell something there in the future, please tell me about your experience and their policies and I will update this post.

The Master’s Guild has various Magic tournaments throughout the month and can be found on their website (http://www4.tokai.or.jp/mguild/). Their standard tournaments are on Monday and Fridays, with the occasional tournament on the weekend (check their monthly schedule for details. Be warned it’s entire in Japanese though). The great thing is that they host 2 FNM events. One is at 4pm and the other is at 7pm. I guess this is to cater to both the younger crowd after school as well as those who work the nigh shift. The players are pretty good at Master’s Guild, but it might be difficult to play without a basic understanding of Japanese. Most players have some vocabulary in English, but can not hold a conversation with you.

Well, that’s all for today’s post. Hopefully you found it useful and you will feel a little more confident if you go into your first FNM or tournament in Japan. I’m always on the lookout for new Hobby Shops to go to, especially those dealing with Magic. If you find a new one in your area, please let me know about it and I’ll feature it in a future article! Thanks again for reading.

12 thoughts on “Talk the Talk: A MTG vocab lesson in Japanese (+ a store profile)”