Bang for your Buck: Investing in Cards for Theros – Blue, Simic, and Izzet

I seem to have done pretty well with white, but today I’ll be covering blue. After the first few weeks of Theros standard, blue seems to be in a good spot. Azorius colors showed a strong increase in value and play, but I think Izzet and Dimir will also see a nice increase in the coming weeks once more decks become established. If the last few seasons showed us anything, it’s that the metagame is never done and that a card can go from obscure to hot in a weekend. I’m going to try and guess which of these cards has the ability to do that in the next few months. Well, let’s start with last time’s Blue, Izzet, and Simic choices.

The obvious all star of my picks from last time was Jace, Architect of Thought. Not even I thought he would go back to his old value of $28. He hasn’t seen that much play since RTR first came out. Aside from him, most of my other suggestions didn’t pan out, but I think a lot of these cards are in a good position to see more play in the coming weeks.

There are a lot of cards with blue that have good value at the moment but their price doesn’t reflect it. One such card is Quicken. It’s selling for $1 right now, but I think it’s undervalued at that price and a buy. Tidebinder Mage is another card that could suddenly take off in value in the future, so I’d pick up a play set at $1 as well. I think Cyclonic Rift should hold it’s value ($2.20), but with Jace, Architect of Thought, I think he’ll come back down in price a little bit to about $22 in a few weeks from his current high of $28 as more people find different decks to play.

My pick for the biggest mover in blue is going to be Aetherling. At $4.50, it’s a little undervalued. Looking at the metagame he’s seeing play in UW, Esper, and some UB decks, but that hasn’t even scratched the surface of possibilities for control yet. We’ll see Bant, UWR, Izzet, and tons more control in the coming weeks, so you can bet that his popularity will increase once more. I could see Aetherling hitting at least $6 before the end of Theros standard. Aside from the rares I mentioned, I think most action in blue will be taking place at the common and uncommon rarity.

It is my opinion that Izzet is on the verge of really taking off during Theros standard. Cards that I mentioned before like Conterflux ($0.70) and Izzet Charm ($0.50) should see slight increases in the next month or so.

The card I’m most excited about is Nivmagus Elemental ($0.50). I’ve been testing out an Izzet Pyromancer/Tempo deck in these first few weeks of Theros standard, and this card is just plain sick with Cipher cards like Hands of Binding and Hidden Strings. Nobody plays those cards now, but I think there is a good chance that decks like UR Tempo will see a good amount of play and send this card’s value close to $2 a piece. You won’t lost much investing in him at his current value, so why not pick up 4? Turn 1 you play him, Turn 2 you play Hidden Strings and Cipher it to him, and attack, then exile the extra spell to make him a 3/4 on turn 3! He’s also great if you’re playing against control. If they want to counter your spell, you can just exile it to make the Nivmagus more powerful! Try him out!

I still think Ral Zarek is undervalued at $10, so I’m going to push him again this time. Izzet colors aren’t popular now, but wait until UWR, UR, and Grixis join the metagame and then we’ll see Ral Zarek find his fans again. I think he’ll hit $14 by the end of Theros standard.

Simic has its fans, but I think this will be one of the last color combinations to be explored by players. Dimir and Azorius are always what people turn to first, but in the next few weeks we should start to see some players trying out Bant (UWG) decks and maybe even some UG midrange decks. I personally think a Garruk/Zegana deck is possible, but it’s weeks away from being standard playable. Too many variables to smooth out.

Master Biomancer ($5.20) is one of those cards that is so powerful in theory, but hard to implement in play. I came up against it the first week after rotation in a Bant Elemental deck that was using Voice of Resurgence, Master of the Waves, and other powerful bant colored spells, and he was quite the pain in the ass. Once he gets in play it’s over if you can keep putting creatures down. Will he see more play before the next set though? I don’t think so. He should hold his value, but I don’t think he’ll be jumping in price any time in the next few weeks. 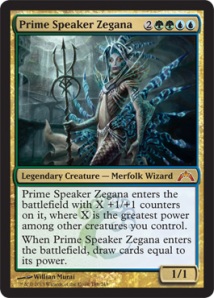 I’m putting all my money behind Zegana taking off  in value again in the future. Midrange will see it’s time in the sun again, and when it does UG seems pretty damn strong. Zegana is going to go up in value again, and when she does she’s going to jump fast and far. She’s sitting at $2.70 now, but if decks start playing her again she could easily double in price to $5 or higher. Pick up a play set right now! I don’t think she’ll drop in price any further, so get her now while it doesn’t hurt your wallet much.

Well, that was another short and sweet article. It really is easier to do these without 7 sets to pour through. Blue has a lot of interesting cards, but it will really depend on whether or not control sees a resurgence in the metagame or not. It was largely locked out during the last block due to the sheer amount of aggro. If you didn’t play Esper with Supreme Verdict, you were dead to GR or mono red on turn 4. I think the metagame is much more open now for control, so I do expect many of the cards I talked about today to see more play.

Next time I’ll be covering black, Dimir, and Orzhov, so be sure to check back after the weekend for my thoughts on the future of removal and mono black control decks. Thanks for reading, and if you think a card is missing from this list, let me know!