Born of the Gods: Playing to your Weaknesses – Multicolor

(Click here for my article on Theros limited – multicolor and other)

Well, I’ll be brief, these are my choices for the Born of the Gods multicolor cards that will be great in limited. The cards can be pretty powerful in the right decks, but the difficult thing about multicolor cards is that you have to play those colors in order to unlock their full potential. This can be troublesome in sealed where you don’t always get the colors that match the multicolor card that you pulled. Draft is much better, because you can build a deck around those colors and get a lot more consistency. Down below I’ll be talking about how these cards can affect the colors they are played in. 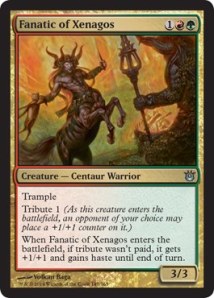 The first card I’m recommending today is an absolute beast. If Green and Red wasn’t already powerful with cards like Xenagos, Purphoros, and almost ALL of the monstrous creatures, Fanatic of Xenagos takes the deck to a who new world of hurt for your opponent. People have been saying he’s the Loxodon Smiter of Gruul, and I think they are right on. For 3 mana you get either a 3/3 trampler with haste or a 4/4 trampler. The value of this card in unreal, especially in limited. It is the most aggressive 3 drop in the set, and will definitely find its way into standard once the set is out. If you’re playing GR in draft, you do NOT want to let this card pass you by. Take it as early as you can if you even think GR is a possiblity. For sealed, don’t force him into your deck if you don’t have the colors, but if you do have enough for a GR deck, he’ll be your all-star.

In Theros, blue and white made up two types of deck: UW tempo/flyers and UW heroic. It’s a no brainer that this card would be absolutely bonkers in a UW heroic deck. You cast it, activate a heroic ability and attack with your creature that is now a flyer, then in your second main phase you play another creature and return the enchantment to your hand to do the same thing all over again next turn. With a card like Battlewise Hoplite in play, this card will just become ridiculous in limited. In UW flyers/tempo, I think it’s also a good choice because the previous incarnation of that archetype was severely lacking in power. With all the new enchantment creatures being released, I think that it stands a better chance, so don’t despair if you end up with UW in your sealed poor or draft. You can make it work! I don’t really think I need to say when to draft this. Just as above, once you know which colors you’re going to draft, pick it up as soon as possible. 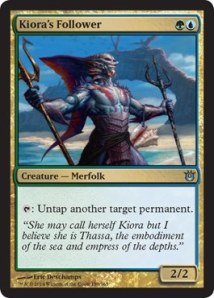 Kiora’s Follower is a tough call, but I think it will work on a variety of levels in limited. On one hand you have a 2/2 creature that acts as a mana accelerator. On another hand you have a neat combat trick that works well in a deck like UG monsters, letting you untap a creature to block. And of course this card works well with the new Inspire mechanic too. It’s a solid choice, and something you’d want to play in a UG deck over a card like Voyaging Satyr. It’s not a must have for a UG deck, but it’s worth considering when you’re putting your deck together. Not a must have in draft either, so don’t worry about getting it until the 2nd time around the table (8th-9th pick).

Here’s a strong supporter for a BR minotaur deck. There are 12 minotaurs in the Theros block now, and with 3 of those at rare, it means you have a good chance of getting enough of enough to build a sealed deck around them (or at least to build it as a sub-theme). I’d personally use the minotaurs as my bread and butter, adding the bigger creatures as finishers. The cards that would really make the deck work though are Kragma Warcaller and Rageblood Shaman. If you get one or more of them, it wouldn’t be a bad idea to consider putting the deck together. Look at the card pool you have and if the deck looks plausible try it out. Quite a few people had some success with it, so I wouldn’t write it off. If you go for building a minotaur deck in draft, I don’t think he’ll go too early. You can probably get him the 2nd time he goes around the table, especially if other minotaurs are still coming your way after the first few picks. Just watch the signals.

Reap What is Sown

This card really makes me want to play GW heroic. We all know that white has some great heroic creatures, but green has more now too. Even without heroic, putting counters on a Fleecemane Lion or other middle sized green creature will give you a distinct advantage. Heck, you don’t even need to play green heroic creatures at all. Activating 3 heroic abilities at one time can absolutely destroy your opponent if played at the right time, so feel free to balance out a deck with fast white heroic creatures and larger green ones. I think this would be a good choice in draft and definitely something you want to keep in your sealed deck.

Siren of the Silent Song

Not bad. You get a 2/1 flyer that makes an opponent discard AND mills them for one whenever it untaps. The UB limited deck is all about hitting an opponent with removal and tempo cards, so this card would be right at home in that strategy. Drop this guy on turn 3, use a Griptide on their creature at the end of their turn 4 after you attacked with him, then watch hilarity ensue as you then mill that creature and make them throw away a card from their hand. It’s a pretty good card. I think I would take this the first time I saw it in draft if I was going for UB, because in all likeliness it won’t come around to you again.

That was short, wasn’t it? I like the multicolor cards this time and I think they bring a lot to their colors, but as I said up above, it all depends on your pool. You don’t want to force them into your deck if you don’t have the colors. With multicolor done, it means that the last color we have to cover is green. Green will have a lot more cards to choose from than multicolor, so it will take me a little bit longer to put the article together. I will for SURE have it finished by Friday though, just in time for the midnight pre-release of Born of the Gods.

If you can think of any other uses for these multicolor cards, or any other synergies that I didn’t cover, it would be great to hear about them down below. Thanks for reading and check back on Friday!

8 thoughts on “Born of the Gods: Playing to your Weaknesses – Multicolor”