Journey into Nyx: Playing to your Weaknesses – Multicolor, Artifact, and Other

Today marks the last article of my Playing to your Weaknesses series. It’s been an enlightening journey to say the least, and I feel like the limited format has been re-energized with the last set in the Theros block. The colors seem to be more balanced (although white and blue still seem to be like the best), and there is finally decent removal spanning all of the colors. Multicolor cards aren’t the backbone of limited play like the Return to Ravnica block, but there are still some really good ones if you have the mana and cards to support it.

Constellation is really looking to make a splash in Theros block limited format. Decks are rewarded for playing a lot of enchantments, and the more you play the better. One life might not seem like a low, but in close games it could be the difference between life and death. The Coinsmith lets you get ahead in the race, and if the board stalls later on in the game you’re still able to further reduce your opponents life total. When coupled with other BW color spells like Athreos, Scholar of Athreos, and Tymaret’s Servant, you can quickly get your opponent in trouble. At it’s base it’s a 2/2 bear with a “gain 1 life” enter the battlefield effect, and that in itself is worth playing in a BW heroic or BW midrange deck. It’s a solid card in sealed, and I’d give it medium priority in draft.

A 2/3 flyer for 4 mana isn’t bad. It’s playable in a UR deck, and his ability works well with Keranos (the god). He’s not aggressively costed, but he’s not a junk card either. Sure, sometimes you might be paying 4 mana to get a +2/+3 power boost on average, but I think that type of extra power is just what UR decks were missing. Most people won’t be drafting UR, so I wouldn’t expect this card to go early in draft. If it seems like you’re starting to lean into Izzet’s domain, pick him up as soon as you can though.

Hands down my favorite multicolor (non-rare) card of the set. Even the art work is cool! Having flash and monstrosity is absolutely amazing, especially if you have deathtouch too. He’ll surprise a lot of people in this format, and his color combination is also one of the best in Theros limited. Blue and Green are all about tempo, and nowhere is that made clearer than with this card. I’d be tempted to splash for him in sealed, and if I was shooting for a UG deck I’d draft him as soon as that archetype seemed viable. You wouldn’t want to take him first, but I would definitely consider him a high pick.

Strive is going to totally reshape heroic decks. The ability is amazing if you have more than 1 creature’s trigger you’d like to activate. Desperate Stand pretty much requires you to be RW (no splashing for it), but it rewards you with one of the best Strive effects. First strike, vigilance, and +2/+0 can absolutely blow out some unsuspecting opponents. You’ll have to be extra cautious when playing against heroic decks thanks to this new effect. This means that removal and tempo cards are going to be that much more powerful. This isn’t really a card you want to draft early, but once you’ve solidified RW definitely pick it up.

Born of the Gods had such horrible artifacts that I didn’t even bother to write about them in the previous set’s article. However, there are actually some playable ones in JOU. Gold-Forged Sentinel is a good card in any midrange deck, especially in those colors that don’t usually get powerful flyers at uncommon rarity (such as green,black, or red). If you’re playing blue or white, you’re probably have access to a few flyers, but if you find yourself in any other color I recommend drafting this highly. Not a first pick, but I wouldn’t let it pass you by if you’re playing anything other than heroic. The same goes for sealed. I’d rather have this in my deck instead of a 5/4 or 4/6  creature for the same cost.

Chariot of Victory is going to be worth a slot in decks with bigger creatures such as UG, BG, GR, or any other deck that has a heavier top end. First Strike, Trample, and haste are amazing, especially with its cheap equip cost. In sealed I would definitely consider putting it in my deck in that 22nd or 23 spot if I had some big creatures that could benefit from the Chariot’s abilites. As for draft, I would place medium to low priority on getting it. if you’re down to the last 4-5 cards in a pack and it comes around to you, pick it up. 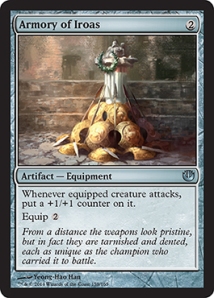 Armory of Iroas is a great card to have if your creatures have some kind of evasion such as flying, trample, or are straight up unblockable. It’s good for both aggressive heroic decks and midrange decks (even though it doesn’t trigger effects). It you don’t have a way to push damage through, it loses it’s effectiveness, but if you have a lot of evasion such as in a UW or UB flyers deck or GR with trample, I’d play this. Medium to low draft priority, and a good 22nd or 23rd card for your sealed deck.

Journey into Nyx is probably one of the strongest small sets I’ve seen since New Phyrexia. The gods are great, there are tons of viable archetypes in sealed/draft, and the games are focused mainly on combat which leads to fast paced, explosive games. There are going to be a lot more miracle/top deck moments in the upcoming limited Grand Prix and the last month of the sealed PTQ season thanks to the new Strive mechanic, and Constellation (especially in green) will add another layer of complexity to an already intriguing mix. Down below are my top 10 uncommon and common cards from this set. If you would like to suggest another card, please do so afterwards.

I hope these tips helped you out at the pre-release and continue to help you out during booster drafts, sealed PTQs, and Grand Prix. I’ll be taking a short break to rest after this exhausting weekend of pre-releases, but I should have a tournament report with my thoughts on the various archetypes of THS/BNG/JOU limited sometime next week. I’ll also be starting my ‘Bang for Your Buck’ investment articles next week about how Journey into Nyx will affect prices in standard and other formats, so be sure not to miss those. Thanks for reading as always.