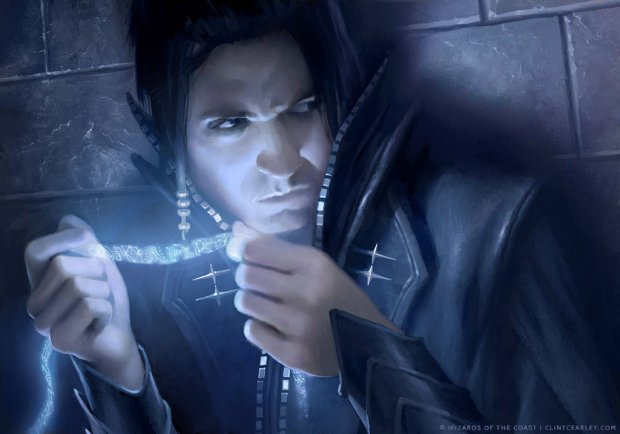 Stealing all of your opponents cards and creating overwhelming card advantage? – Priceless

There are some things money can’t buy, buy but for everything else, there’s Master Thief.

Have you ever wanted to draw a lot of cards but hated decks like Turbo fog because they had few or very round about ways of winning (mill you, yay! – Lame …)? Well, look no further. The “steal your cards” combo with Notion Thief has been around for a while, in fact Gavin Verhey featured a rogue deck using Whispering Madness on ReConstructed back during the Return to Ravnica block. That was cute, really it was, but now that the format has Thoughtseize, Master of the Feast, and Brain Maggot (to name a few powerful black cards), this deck can finally step out of rogue deck obscurity and into Tier 2 playability.

I know what you’re thinking “whoa whoa whoa there tiger. Don’t get ahead of yourself. That’s a mighty high claim.” Well, let’s take a look at one of the most dominant decks in the format: Mono black devotion. Why is is so dominant? Well, it has access to Hero’s Downfall, Pack Rat, Thoughtseize, and a number of other black removal/disruption spells. Now let’s look at this deck. It has access to  . . . well the same things! I’ve taken it out for a ride at a FNM and some other casual events and the results so far have been very promising. I’ve beaten BUG control and JUND control, and came very close to beating BW midrange to name a few. I also took out a Boros burn deck and raced a mono black devotion deck to victory as well. Before I continue though, let me explain how the deck works.

As I stated before, this deck’s sole purpose is to gain overwhelming card advantage over its opponent and use it’s card disruption/removal to gain the upper hand. You do this by playing a lot of cards that draw you more cards, and then make that card draw a one way street with Notion Thief.

As with any black deck, you can start out the game with a turn 1 Thoughtseize which is incredibly powerful. I don’t think I really have to explain how to use this, do I? This deck is all about developing card advantage, so you could slow down your opponent a turn by taking their 2 drop, you could get rid of their removal, pretty much whatever is beneficial for you. The other one drop available to use is Dakra Mystic. This merfolk is very much a control card. As soon turn 2 you can start peeking at the other player’s top card and deciding whether you want them to draw it not. Plus once Notion Thief is in play, you can draw both of those cards instead of giving your opponent any.

With all this card draw, I felt like Pack Rats was an amazing choice. There is no need to play it on turn 2 to overwhelm an opponent (though it’s still a good line of play), because with all the cards you draw with this deck you could easily put down 3+ rat copies a turn. Brain Maggot seemed like another good choice for this deck as disruption. Early on, your opponent might actually be drawing those extra cards before Notion Thief can step in, and being able to see what they have as well as hold one of their cards hostage goes a long way in closing out the game.

Three is definitely the key casting cost in this deck. First off we have Hero’s Downfall. This card is the premier removal card in Theros block standard. It continues to flex its muscle against creatures and planeswalkers alike, and should be a mainstay in standard for the next year. Far/Away is another great removal spell, acting as both an unsummon spell or a sacrifice effect. This is a great way to get rid of cards like Blood Baron of Vizkopa which is seeing a lot of play in GBW and BW midrange decks, but it is good against just about everything. The card that will be doing a lot of the heavy lifting in this deck is Master of the Feast, and it’s also half of the namesake of the deck. Master of the Feast is a very scary 3rd turn card for your opponent if they don’t have a way to get rid of it. The extra card your opponent gets could be troublesome, but once you get a Notion Thief in play you suddenly get an extra card on your upkeep while all your opponent gets is 5 points of damage on turn 4.

The other 3 drops are Lifebane Zombie and Dictate of Kruphix. The zombie is a nod to all of the BW/x decks out there running cards like Blood Baron, Obzedat, Ghost Council, and Courser of Kruphix. Dicate of Kruphix is a card draw engine you definitely need in order to reach critical mass. If you don’t have a Notion Thief in your hand by turn 4, then make sure you use those Thoughtseizes and Brain Maggots effectively until you can draw away so your opponent doesn’t get to enjoy the extra cards. The best way to use him is to flash in a Dictate at the end of turn 3 or play a turn 3 Master of the Feast, then flash in Notion Thief during your upkeep to steal the extra card your opponent would get. It’s also a nice trick to use against mono black decks who rely heavily on Underworld Connections. Sure the trick can only be used once, but seeing their face when you make them pay life and then draw their card is priceless (^_^). Without all of that extra card draw, black has a hard time of keeping up with you, especially if you’re populating the battlefield with rat tokens.

While this deck is still a work in progress, the sideboard is on the right track. Duress would be used against burn and control decks. Cyclonic Rift would be against control decks or any other decks that rely heavily on cards like Detention Sphere or Banishing Light because UB really struggles with enchantments. For aggro decks, I’d side in Ultimate Price, Doomblade, and Devour Flesh (which would also be used for BW midrange match ups to get rid of Blood Baron). I’m not too sure about using Gainsay in this current metagame, but it would be pretty good against UW or Esper control. Being able to stop a Sphinx’s Revelation, Jace, Architect of Thought, or Detention Sphere would be pretty useful I think. Ashiok, Nightmare Reaver should work pretty well against control decks, but I think it would also do a great job against mono green and GB dredge decks. Dropping it on turn 3 can be absolutely debilitating against almost every deck. As for the 3rd Lifebane Zombie, that’s a card I would side in against GRW, GBW, or BW midrange decks due to the number of targets in each.

A word of warning, this is a greedy deck. It wants a lot of cards and it gets a lot of cards. Some of my friends have said it’s not fun to play against due to its incredibly oppressive nature. I think that most people you play against will really like it the first time you play against it, but if you play with it at every FNM you could get on some people’s nerves. I recommend playing it for a change of pace every once in a while. I think it’s actually a pretty good deck and could give a lot of the current meta’s decks a run for their money. Try it out, test with it, and take it to a few casual events and tell me what you think. I’m also looking forward to any changes you would make to it and the reason for doing so! I hope you enjoy playing with it regardless and don’t worry too much. It’s okay to be greedy every once in a while.