Well, Wizards of the Coast sure dropped a bomb on us all this weekend at Worlds.

They also announced that there will be 3 Grand Prix happening simultaneously in the Netherlands (Europe), Las Vegas (North America), and Chiba (Japan, Asia). When the location was announced I immediately thought of Makuhari Messe in Chiba City. It’s extremely large and holds the Tokyo Game Show every year in late summer. It’s also within walking distance of Kaihin Makuhari station which should be pretty convenient. Since I’ve pretty much been at a loss for ideas for my blog recently due to a lack of playing time and a busy work schedule, this couldn’t come at a better time.

If we look at the previous Modern Masters set, then we can get a rough idea of how many of each card we are working with. The first set was 229 cards, but the new set will be 249. This gives us a few more spots at rare and mythic rare, but it should also up the count of common and uncommons as well. I’m guessing 104 common, 66 uncommon, 63 rare, and 16 mythic at the moment.

There were plenty of cards NOT included in the original Modern Masters that should definitely have a chance this time around. In this article, I plan on going through which cards I think will be reprinted from each rarity, as well as what percentage they will be reprinted. Today I’ll be covering Mythic Rare.

Emrakul has been spoiled already, and if the big boy is seeing play in MM2, then we can probably be looking forward to some good reanimator spells. Through the Breach, Goryo’s Vengeance, and a few other cards might be in this set as well. His current price is about $50, but you can be sure he’ll settle closer to $35-$40 after the reprinting. 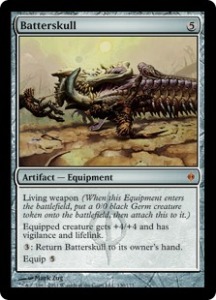 I think there is a good chance we’ll see Batterskull get reprinted. Yes it was just featured as a GP promo last season, but I think there is still a lot of demand for it. If there is going to be a strong artifact presence in MM2 due to the set going all the way up to Scars of Mirrodin block, then I think Batterskull will be back as well.

While not really played in Modern that much, I could see this possibly getting a reprint. It was fun to play with in control decks when it was in standard, and still sees play in other formats and has a strong casual demand. Not a strong contender for one of those 16ish spots, but a possibility. If control is one of the themes in the set, he might be in there.

Another card that is simply too good not to reprint. If we’re getting a card like Emrakul which screams being cheated into play, then I think we’ll have to consider Elesh Norn coming back as well. This is another card that has been infused into the market slowly through judge promos, but that really hasn’t affected its price too much. I’d really like to see Elesh Norn back. Great way to hose token strategies and just straight out win.

The printed the other one to infinity, so why not bring her Scars form back? It’s a solid card for token strategies in limited. Not overly powerful but not horrible either.

Karn Liberated is definitely a strong contender for Modern Masters 2. He doesn’t see much play anymore in the current modern meta in GR Tron (or any other tron build), but that’s not to say he can’t see a comeback. A reprint of him to lower his price, Wurmcoil Engine’s reprint in Commander 2014 . . . it could really bring down the price of that deck and bring some innovation.

Linvala, Keeper of Silence is another card I think we’ll see in MM2. It’s a great card in Birthing Pod and a few other tier 2 decks in modern, but it’s price tag of about $50 is a little restrictive. A reprint could be just what it needs to get played in more decks. It would also work well in limited against artifact creatures if that becomes a thing. 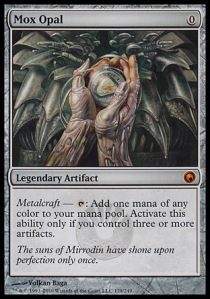 Mox Opal is currently pushing about $70 in Japan, and it’s over $50 in the USA. It’s really only important in Affinity builds, and it definitely seems like we’ll be getting more affinity love in Modern Masters 2. Affinity is in dire need of some innovation I think, and hopefully a cheaper buy in will bring some more players into the fray with a fresh mind. At the heart of every Affinity deck will be the Mox though. I’d expect the price to drop to about $40, but still have a pretty high price tag.

I’m guessing this guy is more of a casual card than anything else (cause I don’t see him in any modern decks), but his $28 price tag is somewhat out of control. There might be a reprint just to bring the price down a little bit.

Tezzeret, Agent of Bolas is another high probability target. He’s seen play in a few decks in modern here and there, and in a UB artifact themed deck in limited he would be really fun to play with. I hope we see him back. If not him, then I’d be fine with Tezzeret the Seeker as well.

At this point, there are now only a handful left. These could be reprints from Modern Masters 1 like Tarmogoyf or Vendilion Clique, or the could be cards like the Titans from M11 and M12. Considering that Primeval Titan is the only one that needs a reprint and the others have appeared in other products such as Duel Decks (Sun Titan in Heros Vs. Monsters for example), I don’t think this is going to happen. We could get the whole Eldrazi run as well such as Ulamog the Infinite Gyre and Kozilek, Butcher of Truth. What I do think will happen is that a few rares will be upgraded to Mythic status, much like Clique was for MM1. Fulminator Mage would be a good  candidate for that.

Wizards could also just reprint some cards in limited supply. Cards I’d like to see make an appearance are Ajani Vengeant, Lotus Cobra, Mindbreak Trap, Sarkhan Vol, Thrun the Last Troll, Vengevine, and Venser the Sojourner. If they are thinking about making this set more about multicolor decks, then having a multicolor planeswalker cycle might not be out of the question either.

That will do it for my initial article today, but next time I’ll be going into a much more extensive list of rares. There are quite a few candidates this time around that I’d like to see reprinted, and I already have a list of about 60 rares I’d like to see printed. I should have time to work on it this week during my off day, so hopefully you won’t be waiting too long! I know this list doesn’t cover everything either, so I’d like to hear what you think. Which mythics do you think will get reprinted in Modern Masters 2? Which rares could possibly be upgraded to mythic status? I’d like to hear what you think. Thanks for reading and see you next time.