Dragons of Tarkir: Playing to Your Weaknesses – Blue

Today I’ll be covering which blue cards I think will work well with the previous cards spoiled from Fate Reforged. If you want to see what I recommended last time, then please visit this link and read through it. Before we start, I must apologize for not posting this yesterday. I had the day off but I was busy going through the very large amount of cards that I bought in Hamamatsu city in Shizuoka, Japan. I picked up some great deals there and have already sent a few of them out on Puca Trade. I will easily triple my money when all is said and done. Be sure to read all about it in a future Puca Pals article! 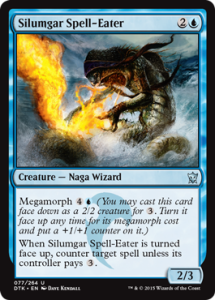 My first pick for today is Silumgar Spell-Eater. There are a few more playables in blue this time around, but I would say they are weaker than what blue had to offer in Khans of Tarkir. The abilities of many of the cards are better, but I think the color will be reduced to a support role again. I like the Spell Eater because he’s can act like a Mana Leak when played face down. This can be an absolutely huge tempo swing later in the game when you opponent taps out and plays their finisher and you counter it. It’s also easily splashable, though you’re probably better off playing in a deck like UG where you can ramp up to its ability quickly. I think it would be a great card in any blue build though. 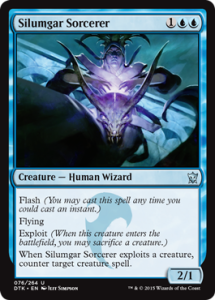 This is another really fun card. I’ve always wanted to play counter spells when my card pool was in blue but didn’t have any good removal, but I was too worried about the card either being dead in my hand or being overrun by my opponent. The duality of this card can’t be overlooked, especially in a creature heavy limited environment. A 2/1 flash flying creature for 3 mana is already playable, but giving you the chance to flash him in and sac a creature to counter an opponent’s creature spell? This is just downright awesome. Another winner in my book. 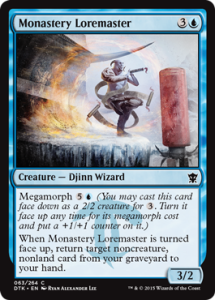 This guy’s ability totally depends on what kind of non-creature spells you have in your graveyard, but when you’re playing with a limited amount of removal it can come in pretty damn handy. Being able to return an Ultimate Price or a Planeswalker could shift the tides of the battle into your favor at a key moment. If you have some great spells you’d like you use again, I’d take him rather highly in draft. Otherwise he’s a decent card to pick up if you’re a few turns into the draft. 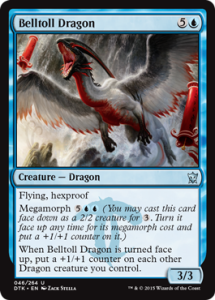 Just as his other uncommon brethren, the Belltoll Dragon is okay by himself, but becomes much better when you’re playing with multiple dragons. It’s not something I’d play if I just have 1 or 2 dragons, but if I have a few that are playable he could slip into one of my deck’s finals spots. The hexproof is going to be a good ability, but he could easily be matched in power or overpowered by many of the flyers in the game if you don’t megamorph him. 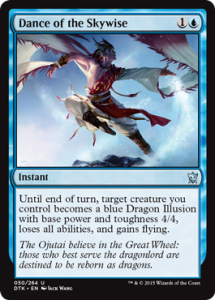 Dance of the Skywise

Great combat trick, good power level, cheap to play, works well on both offense and defense . . . this is a great card to play if your deck is creature light, or if they are a little low on the power level. If you are playing an aggressive deck this is definitely a card you want to be playing. It can also do other things such as activating Ferocious and Prowess abilities. I’m not sure I would take this over a decent sized creature in draft, but if it fits in your overall strategy get it. 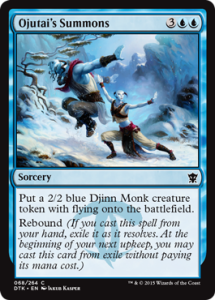 I think 5 mana for a pair of 2/2 flyers is worth it in limited. I’ve always had a thing for token makers, especially if the creatures it makes have evasion like flying. What I like about Rebound is that if you are playing with a decent amount of Prowess creatures, this will activate their ability twice. Once on the first turn you play it, and again during the upkeep of the next turn. Not bad to play alongside Monastery Mentors or Lotus Path Djinn! 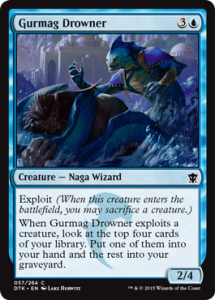 If you’re playing with Delve effects or creatures like Gurmag Angler that have Delve, it’s good to have creatures that have a lot of synergy and work together to make each other stronger. The exploit ability is an amazing ability if you have ways to recur it, such as with Tasigur’s ability from FRF.  I see Palace Siege from FRF as having good synergy with exploit. Drowner will let you draw a card, filter the other cards and put them in the graveyard, then set you up for a big Delve the following turn. Not a bad card. Solid roleplayer in a UB deck. 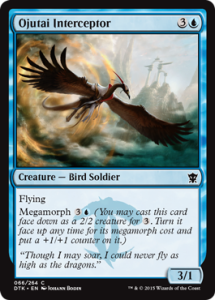 Good flyer that will trade with most dragons if you megamorph it to make a 4/2. Not a first pick in draft, but not something you’d want to pass twice. Good in just about any blue deck you can make. 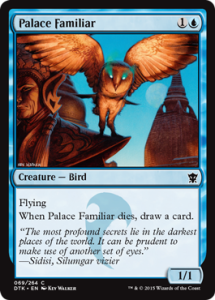 It’s only a 1/1, but it’s a flyer and can either get in for a few points of early damage or block a dragon and draw you a card later. It’s also not a bad card to have if you’re playing with good Exploit cards. Both this owl and Youthful Scholar work great with that ability.

Blue seems to be much more balanced than it was in the past sets. It has a lot more flyers than before, and Exploit could be pretty strong in the right deck. Megamorph also looks pretty good, and there are quite a few powerful “tempo” effects in Dragons of Tarkir as well. I think the loss of Prowess will hurt blue though. Jeskai was just a more powerful clan before. It’s still a little early to tell, but I think blue/x flyers could be a strategy for DTK/FRF sealed.

That does it for today’s article, but if you have comments or want to add your own suggestions/synergies to the article, please feel free to post them down below. I’ll be working on black tonight and should have it up on Wednesday night. Thanks for waiting and be sure to come back soon!