Bang for your Buck: Investing in Cards for Shadow of Innistrad – White, Blue, and Black

It’s still a little early in Shadows over Innistrad standard, but after 1 weekend of standard (thanks to the SCG open) and another one coming up (SCG Invitational), we have a better idea of what the metagame will look like going forward. The pro tour is still more than a week away, and I don’t expect things to change too much afterwards. Perhaps a few new strategies here and there, a few cards used ways we never considered, but I don’t think it will be that big of a shake up. For the most part I think we’ll see lots of optimization from previous established decks like BW midrange or Bant Company.

The first set after a rotation is always the time of countless price spikes. All of those cards that were at depressed prices due to their uses being stifled by KTK and FRF cards now have a time to shine. We’ve already seen quite a number of price spikes, but there could still be some on the horizon. We’ll get to what SOI will bring to standard soon enough, but before we do lets take a look at how my picks from last article did over the past few months.

I did pretty good last time overall. I hit about 70% of my predictions, and the ones I missed weren’t by much. But now the hard part comes. With only a week of results in the books and the pro tour still looming, what should we look into investing in before cards spike again? Let’s take a look at what’s currently available to us in DTK, ORI, BFZ, and OGW and how it will fit into this new standard.

I’m going to go ahead and say that Archangel of Tithes is a SELL at $22. I don’t think that is a realistic price for her, but if you’re using her then by all means don’t get rid of her. The White weenie decks will have lots of problems getting past her and I expect her to see a lot of play, but I think her price will settle around $15 this summer and will start dropping after the Pro Tour. It only has about 5 more months of play before it rotates, and I don’t think you’ll get a better deal for her than now. 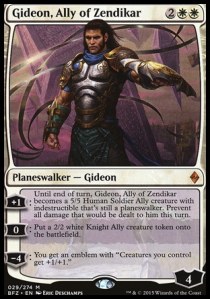 Gideon, on the other hand, is undervalued you. With all of the white aggro, midrange, and control decks using him inventory of Gideon is going to dry up really quick at $20.75. I expect him to hit $25-27 over the next few weeks. 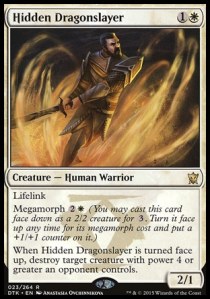 While Dragonslayer will be rotating 5 months down the road, I think it will see a bit of sideboard and main board play over the summer. It works really well in a GW human build alongside Den Protector, Thalia’s Lieutenant, and Tireless Tracker, and takes care of dangerous cards like Avacyn, Mindwrack Demon, and of course Eldrazi if you run into any big ones. If you don’t have a playset already, grab them for $1.25. It could triple in price if GW humans gets off the ground in future tournaments.

There really aren’t a lot of good deals this time around since most of the other good cards in this meta already spiked. However, I think there is still some playability out of the bulk that you’d be good to buy before they go up in price. Lantern Scout ($.75) currently sees some play in Bant Company decks, and if that deck continues to over perform I think the card could see more play, especially in mirror matches. Might double in price. I really think a white based control deck will be built this season, which is why I continue to believe that you’ll want 4 Planar Outburst ($.75). Because people will be playing play sets, the price has the ability to shoot up a lot faster than most cards. Stone Haven Outfitter ($.50) is another card that I’d like to see get played, and I think there is a possibility of seeing it in some fringe equipment deck as Shadows Over Innistrad brought a few more playable cards to the deck. Speaking of fringe decks, I also kind of like Starfield of Nyx ($2.50). It’s not really bulk, but it’s pretty low. I think it could see more play this season at non competitive events which could double the price.

The pickings are rather slim for blue, but that doesn’t mean there aren’t good cards that can suddenly jump into the metagame and take it by storm. I still believe that Harbinger of the Tides is undervalued at $2.25 and that it will find a spot in standard before summer is over. I expect it to hit $4 by the end of the summer, and it could go even higher than that if Merfolk does well in modern. Blue’s new bounce spell Engulf the Shore seems like it would work well with him as it bounces him back to your hand and lets you play him again. I’m currently thinking mono blue Tutelage Tempo could be a real thing.

This is where you can find some sleepers in standard. Without a lot of powerful cards in blue other than Jace, Vryn’s Prodigy, everything else has been relegated to the bulk bin. Here are some cards that I think could see more play. Crush of Tentacles ($1.75) seems like it could see play in a blue tempo/control deck like UR so I’d keep my eye on it. Giving you a finisher with Surge makes it better than other mass bounce effects. Dimensional Infiltrator ($.50) showed up in a UR Eldrazi deck during OGW standard, and the deck could show up again but I don’t think the card will go up much.

Stratus Dancer did pretty well for itself with Bant Megamorph during OGW standard, and that deck isn’t dead yet. If control decks rise to fight the white weenie scourge, I could see this showing up in Bant decks again. $1.25 isn’t a bad price for it if you want some for your sideboard. Thopter Spy Network ($0.75) has shown up in some UW Thopter control decks that focus on countering and board wiping while putting cards like clues into play so you get thopters to attack with. I’m not sure how powerful the deck can become, but it could become a fringe favorite so be on the look out for it. 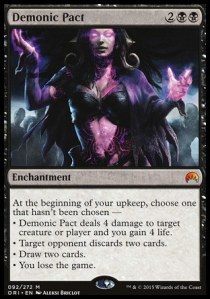 BW Pact/control might seem like a fringe deck, but the deck has a brand new set of toys to play with from Shadows. Angelic Purge, Bound by Moonsilver, and even Starfield of Nyx are great with this card. On top of adding Stasis Snare and Silkwrap to the mix, BW Pact/control is a competitor in this upcoming standard, and not a fringe deck. I expect it to see a decent amount of play as a 4 of in this deck and it should push it’s current $1.50 price up to about $4 or so. Not only is it fun to play with, but it’s powerful too.

Painful Truths should make a comeback in control decks like Esper, Mardu, or Jund eventually, but I think it’s going to take a month or so for people to optimize control for this new standard. At the moment there is no clear control deck, but you can be sure without Dig Through Time that the decks will either be using Painful Truths or Read the Bones to draw cards. It’s simply too strong to stay at $1.75 for long. I see it going back up to $3-4 by late summer.

It’s no Hero’s Downfall, but Ruinous Path ($1.25) is probably THE best black removal in standard right now. We’ve seen a lot of white aggro so far, but don’t forget how many BW decks there were at last weekend’s SCG Open. BR Vampires and BR Dragons could very well show up down the road, as well as a GB deck and you can be sure that these decks will want to run around 3 of these. It’s very effective, and outside of BW’s Anguished Unmaking, other black decks would be hard pressed to find a card with a similar power level. I think it’s undervalued and will see a lot more play as the season continues. Most likely it will hit $4 by the end of summer.

Bearer of Silence is a definite must buy at $.75. Mono black eldrazi was a thing in OGW standard, and it was pretty good. I think the deck is still pretty good and will be back before Eldritch Moon is released. It’s great for aggro and has a powerful ETB effect. Wasteland Strangler ($1.25) is another card that I think we’ll see back in standard soon. Both Silkwrap and Stasis Snare are really good in this standard, and adding in Declaration in Stone only makes the Strangler better. I think it could easily triple in value.

It’s strange only having 5 sets to build decks with. You’d think that with such a limited number of cards we’d only have a few strong archetypes, but the standard metagame continues to be incredibly deep. Right now is all that we will have until Eldritch Moon is released in mid-July. There is still another 5 months left for both Origins and Dragons of Tarkir, so be on the look out for one last spike in their prices before they fade into obscurity. I think that the end of May/Early June is probably going to be the best time to sell cards from that set before they start their downward trend. Keep an eye out for good buy list prices as well as spikes on Puca Trade to get rid of them! That wraps up today’s trifecta of colors, but I’ll be back after the Star City Invitational this weekend to talk about Red, Green, and Artifacts. If you have a hunch that another card I didn’t mention will see a spike please be sure to leave a comment and give us all a heads up!

← The Japan Metagame Diaries – Walking in the Shadows
Bang for Your Buck: Investing in Cards for Shadows Over Innistrad – Red, Green, and Artifacts →