Kaladesh: Playing to Your Weaknesses – Blue

White was all about fabricating servos, creating energy, and building around other ETB effects, but in blue we start to head in another direction: artifacts. Blue has had a long history with artifact related effects and cards that interact or support them, and that history is continued in Kaladesh (in no small part thanks to Tezzeret). It sill has a good amount of flyers and tempo spells, but in today’s article we’ll be focusing slightly more on how artifacts fit into KLD limited as well as cards that we can use in energy based decks. 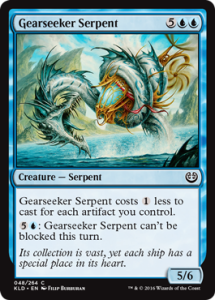 I’ve already gone through the entire spoiler and checked out what I thought were playable cards in each color, and there are definitely enough artifacts in this format to support cards that are affected by them. As I said in white, most decks should be able to support 2-3 vehicles in limited, and on top of that I expect decks to have another 2-3 artifacts in their decks for a total of 6. I don’t think you’ll be casting Gearseeker Serpent often for 2 mana, but I do think that 5 mana is incredibly realistic. A 5/6 for 5 mana that you can make unblockable is pretty strong. Even if you don’t end up having a lot of artifacts in your deck, I still think it’s fills the role of a finisher well. A multi-artifact deck could probably handle 2, but otherwise I think you’ll just want 1. I expect it to be somewhat high draft pick. 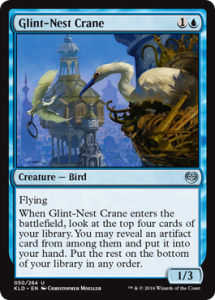 It’s probably not as useful as Augur of Bolas (M13) was, but in a format with a decent amount of playable artifacts Glint-Nest Crane will be a pretty sweet card. A 2 mana 1/3 flyer would be playable regardless since it can handle all of these Thopters and Servos running about, but that ability pushes its score up even higher. This is a great card to have if you’re playing multiple vehicles, and if you can get your hand on 2 of them in draft I would recommend it. Even if you’re playing sealed and only have 2 artifacts in your deck, it’s still worth having in your deck. I could see this being a 4th-5th pick in draft. 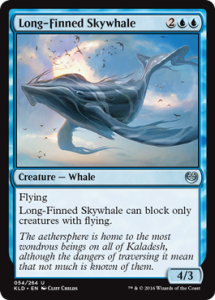 It’s nice to finally get a beater that flies. So what if it only blocks other flyers? Swinging for 4 damage in the air is going to be very hard to deal with, especially if your opponent isn’t playing in white. There aren’t even as many thopters in this set to chump block it. It will trade with just about everything that flies so if you do need to use it for defense you can be sure it will take something down with it. One caveat however; at 3 toughness I think that most removal will be able to deal with it. Still a worthy draft pick though. 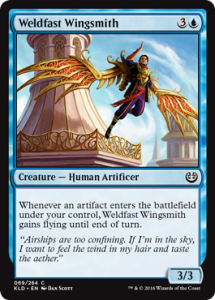 Weldfast Wingsmith is another one of those blue cards that works very well with artifacts. If you’re playing a deck with a lot of Fabricate abilities, vehicles, or with an artifact that can put other artifacts into play like Whirlermaker, you can assure that he’ll be flying most of the time on your turn. On the turns he isn’t flying, a 3/3 for 4 mana is still both a good blocker and attacker. Solid roleplayer in limited. 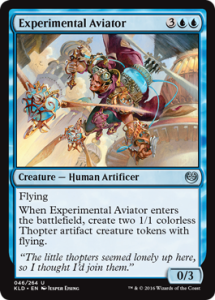 It’s no Whirler Rogue, but you still get 3 creatures from one card, and they all fly. If your deck has access to anthem effects like it would in UW, the card is worth playing, but you should also consider blinking or bounce effects that would let you take advantage of his ETB. I don’t see why this guy didn’t have a Fabricate ability, but I like Thopters more than Servos anyway so I can’t complain. 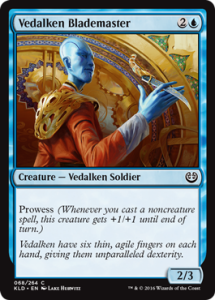 Most limited decks in the past have played 5-6 non creature spells unless they had the pool to play something (like UR spells from SOI block with Rise From the Tides), but I think in this format we’ll be adding vehicles to the mix that will give Vedalken Blademaster a few extra Prowess activations and make him a very strong 3 drop. Besides blocking well, your opponent will also have to be careful with him on offense as well. A simple combat trick could make him very formidable. I’d shoot for about 2 of these in my draft deck, possibly 3 if the pool had the non-creature spell synergy. 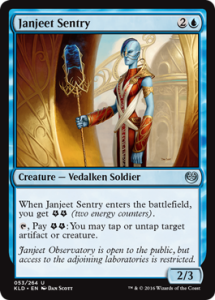 Blue’s energy producing creatures aren’t as good their white brethren, but they should prove useful should the need arise to use their ability. The Sentry’s ability isn’t something you’ll want to use every turn, but when you need to shut down an opponent’s card to stay alive or to swing in for victory, he’ll be there. Worst case scenario is that you’ll have a 2/3 vanilla creature that gives you 2 energy to later on. 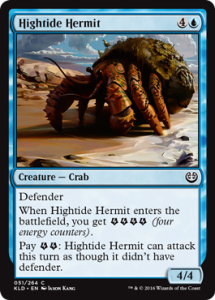 I’d much rather use the Sentry’s energy for this guy. It’s a massive blocker that can trade with a lot of attackers and will shut down your opponent’s offense for a few turns until they can take care of it. You’ll have to use energy for its attacks sparingly though, as you don’t want to be stuck late game with no energy and with no way to finish your opponent as it goes into full on defender mode. 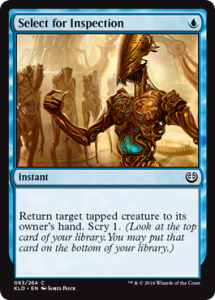 I think most of the strength of blue lies in its spells. You can always count on the color to have good combat tricks and tempo spells, and Kaladesh doesn’t disappoint. Select for Inspection is incredibly easy to cast and is at instant speed as well so you can use it whenever you want. That makes it great for defense, allowing you bounce your opponent’s attacking vehicle or creature. I’m sure there will be limited applications on offense as well. I’d be happy to open this in sealed or draft it in limited. 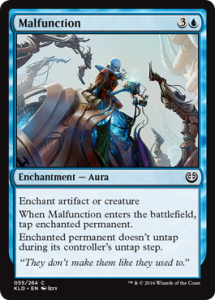 Yay, it’s Sleep Paralysis (SOI) again! The only difference is that you can now use it to tap artifacts as well as creatures which is pretty sweet. Being able to tap down a nasty vehicle or artifact such as Aetherworks Marvel will be the key to staying alive in some games and be able to secure you a win in others. I would actually draft this high in this format, and I could even consider splashing it in non-blue decks due to its versatility. If you can grab 4, grab 4. It’s great blue removal. 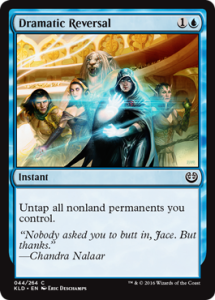 Playing a vehicle deck and just tapped a lot of your creatures to attack? Leave yourself totally open to attack next turn? Never fear. Dramatic Reversal untaps all of the crew of those vehicles allowing you to crew another vehicle if you didn’t attack with it the previous turn or allowing you to block favorably when your opponent thinks they have the upper hand. Good combat trick. Wouldn’t mind having at least one in my blue limited deck. 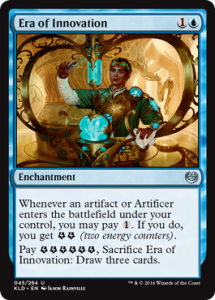 I’m not too big on playing cards that only have the purpose of drawing you cards, but being able to harvest energy from them and then sacrificing it later on when I really need the card advantage is ok in my book. If you’re playing an energy based deck I think this is an auto-include, and splashable if your mana base can handle it. Both UW and UG Energy decks are what I’d recommend. 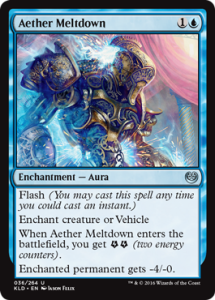 Good combat trick already with flash and the -4/-0 for 2 mana, but giving you two energy on top of that makes it hard to NOT include it in your limited deck. Not a high draft pick, but also not something you want to let slip by you if you’re playing blue. Blue doesn’t have anything that “kills” so combat tricks are the only way you’ll be able to get rid of something most of the time. 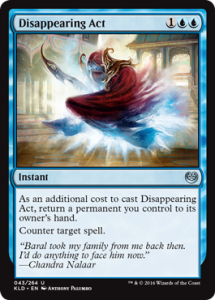 So basically it’s Cancel that tacks on what seems like a restriction at first. You have to return a permanent to your hand in order to cast it? Boo. That sucks. If you simply must play it turn 3 then this could be a land and that would set you back a turn, but later on in the game this could actually be pretty useful. It could save a creature that has been locked down with an enchantment, you could use it to bounce a creature with a sweet ETB effect again, or you could replay an enchantment or artifact of your own to get double the effect. I don’t think I’ll be actively building around this effect, but this is definitely a card I would consider in that final 23rd slot in an ETB, Energy, or Fabricate deck. 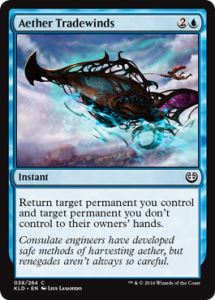 Aether Tradewinds gives you that same option of bouncing a permanent of your own to use its effect again, but it also does it to your opponent which is pretty sweet. It’s instant speed and only costs 3 mana which makes it a great tempo card in limited. Personally, I’d much rather have this than Disappearing Act but each have their uses. I could see myself picking this rather high in draft too, especially if I had ETB effects I wanted to abuse.

I like the tempo cards in blue, as well as the cards that work alongside artifacts and help you to take advantage of ETB effects, but I do feel that blue is somewhat lacking. Blue will have trouble standing by itself as a main color, and will be relying on a high level of synergy to be effective. UW Energy decks could be good but not great, but I think UW decks with a focus on ETB effects will be pretty good thanks to the large amount of spells that let you bounce cards between the colors. UG Energy and UR Vehicle decks also seem viable, but I haven’t looked into the other colors in depth yet to be able to give any definitive opinions.

What are your thoughts on blue? How do you think it will be played in KLD limited? Will it be relegated to a support role, or do you think some strategies can push it to the forefront? I’d like to hear what you think about the color down below if you have any thoughts on the subject! I’ll be working on the black article later today and I’ll hopefully have it on Friday morning. It’s looking like I might be able to get through green before the pre-elease on Friday night here in Japan, but overall it looks like I’ll be shooting for a wrap up of the limited evaluations sometime on Friday night. Be sure to check back a lot over the next few days cause there will be a lot of updates! Thanks for reading.

2 thoughts on “Kaladesh: Playing to Your Weaknesses – Blue”