I’d like to apologize for not getting this out sooner. I almost had it done on Sunday night, but had to go to bed early in order to catch the first bullet train of the day to Tokyo so I could compete in the God of Frontier tournament. I’ll be posting about it later, but not until after the pre-release. Let’s get back to my evaluations for now.

In Kaladesh, blue gave us a lot of flyers and some tempo spells, but there weren’t really a lot of cards that I felt really pushed you to play blue. If your pool had some bombs like Torrential Gearhulk or a Rashmi, Eternities Crafter you’d probably play blue or splash for it, but I often found myself playing anything but unless the synergies were there. UG Energy was alright, as was UW flyers, but I often found myself playing GR energy or BW flyers instead. If you want to read what my first impressions were on Kaladesh blue, you can read my evaluations from last time.

I’d like to start off blue with Trophy Mage. It joins a long line of artifact tutors such as Trinket Mage (SOM) and Treasure Mage (MBS), but with one catch: it only gets artifacts with a casting cost of 3. The others would let you do 1 , 0, or 6+, but Trophy Mage is only 3. Now this isn’t that bad in Kaladesh/Aether Revolt limited though. This means you can tutor up a Renegade Freighter, a Fleetwheel Cruiser, or even the new Peacewalker Colossus. Depending on what artifacts you end up with, it could be a powerful card. If you’re able to bounce her or blink her you can get the same bonus again. While it really depends on what’s in your sealed deck, I would strongly recommend playing her.

If you’re searching up artifacts, might as well put them to good use! The new mechanic Improvise is basically convoke with Artifacts, which rewards you for playing with a lot of them. What’s the best balance is yet to be seen, but I’m guessing you should be able to safely play about 6-7 if you’re playing both vehicles and some mana creatures. I don’t think you’ll be playing this on turn 3 for 3 mana, but I could see it coming down on turn 4 somewhat consistently. A 4/3 body puts Wind-Kind Raiders up there with the Airdrop Aeronauts, but with Wind-Kin you have the chance to play it for value. An early draft pick, and good card for UW flyers. 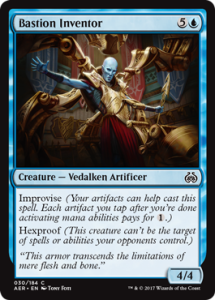 Bastion Inventor might not be as good as the Raiders, but getting a 4/4 hexproof body is really good if you’re playing a few combat tricks and enchantments. If you were looking to cast a card like Conviction over and over again to activate Revolt triggers, the inventor is your man, err Vedalken. Now add in the ability to cast him for cheaper than his casting cost and you have a winner. Solid card in any blue deck, even better if you’re playing a decent number of vehicles. He can easily pilot your Skysovereign or Peacewalker Colossus, and a number of others. Not something you’d pick first, but I’d get him early if you’re in blue. Might even be splashable.

Hinterland Drake is much better than Wind Drake, and costs the same as well. It should block other flyers well, and its drawback shouldn’t hurt you too much. Roleplayer in a blue/x flyer deck, fits well on your curve. 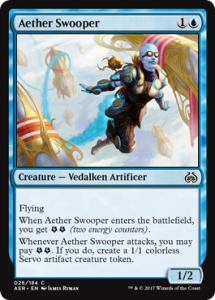 The blue version of the energy/servo cycle is much better than the white one. Sure the white version is a 2/3, but it won’t always be able to attack to give you the ability to make the token. Serviceable in a blue flyers deck, but probably more of a 22nd or 23rd card that could easily get cut if you find something better. If there were less flyers I’d rank it higher, but Sky Skiffs will be everywhere and able to block it. 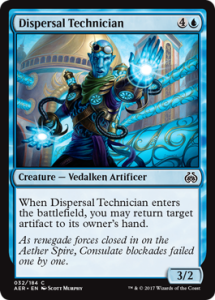 Your opponent’s Smuggler’s Copter got you down? Just call the specialists at Aether-be-gone and we’ll send you a Dispersal Technician to solve your problem! All joking aside, the technician will probably end up seeing a lot of play. Even at 5 mana, being able to bounce a vehicle they planned on blocking with or getting rid of an Metalwork Colossus could be a huge tempo swing for you. His attack power isn’t bad either, and if you can blink or bounce him you’ll get to use his ability again. I wouldn’t feel bad drafting him somewhat early.

If you’re playing with a planeswalker or have a way to put counters on your creatures, this could end up being rather powerful, but I’m guessing the best use you’ll get out of Skyship Plunder is creating more energy counters (which I’m guessing are counters a player has). Being able to “proliferate” your energy will lead to some interesting interactions. You could cast a more powerful Harnessed Lightning, use Aetherworks ability more often, or use the energy counters to give your 4/3 Bristling Hydra more power and protection. I think it works best in a UG, RUG, or UR Energy deck, but by itself it’s still a 2/1 flyer for 2 mana which is playable. Good utility creature in limited.

Salvage Scuttler takes some work in order to become useful, but it’s not entirely a draw back. Let’s say you’re playing the green Puzzleknot in a RUG energy deck, you not only get to gain 3 life again, but you also get 3 more energy to use. That’s not too bad, but how about on top of that you get to activate a revolt trigger? See? It’s not all that bad. You might have to build your deck a little around him by adding in some artifact creatures or vehicles, but it shouldn’t matter that much. Should be decent in limited, especially if you have the right cards to abuse. I’d take him over the other 4/4 crab defender that you have to pay energy for.

This is actually better than I initially thought it was. While it doesn’t tap the creature/artifact when you play it, it does keep it from untapping forever similar to a card like Claustrophobia. Being able to keep their Smuggler’s Copter or other troublesome vehicle tapped down is also pretty big. I’m tempted to say this would be a good, early draft pick. As far as blue “removal” goes, it’s not bad. I’d rank it slightly better than Malfunction due to costing half of the mana.

I can’t help but compare this to Thoughtcast, which let you cast it for 1 mana to draw 2 cards if you had 4 artifacts in play. Reverse Engineer has that similar effect, but you need to tap those artifacts, and even then pay 2 blue mana. Still, 2 blue mana for 3 cards is pretty damn good! This card should find its way into a few blue decks, especially those heavily in vehicles and artifact creatures. Great to have with lots of Fabricate effects in UB, UG, or UW as well. I’m not sure if I would first pick it, but if that pack was weak, why not try to abuse this card? This limited format should be capable of doing so.

I’m jealous that black got Fatal Push, but damn this is pretty damn good for blue. Usually you have to play 3-4 mana for a ‘sleep’ effect, but one mana is pushed. I like this card a lot and think it will be a great card in blue decks that have an aggro theme. It’s good both on offense (tap blockers) and defense (preempt an attacking creature), and I’d be hard pressed to give you reasons why you shouldn’t play it. Most likely will be better in a UG energy or UW flyers deck. Those colors don’t have the best permanent removal, so take into Custody would work. 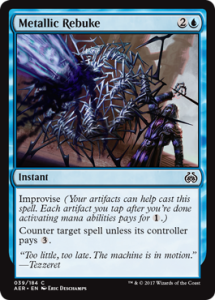 Metallic Rebuke has the same potential of Reverse Engineering. People have been talking about it on Twitter as the new Mana Leak for artifacts, and that’s true for modern Affinity. It would be easy to drop your hand with a Mox Opal open for blue and then counter anything your opponent plays the next turn. But in limited? Well, it should still be good. I don’t know how fast you can get out enough artifacts to abuse it (Ornithopter?), but being able to leave one mana open from turn 3 onward to counter any threats is useful. I don’t see it being used as much as Engineering, but I imagine a UW flyer deck would appreciate being able to keep the skies clear. Not bad for your limited deck, but you could probably get away with cutting it as well and still not lose too much of an advantage.

Blue seems to have given us enough flying creatures to put together a competitive UB or UW flyers deck in KLD/AER limited, and their power level has been raised a little bit. The tempo cards are stronger, and there is also a lot of cantrips to help you replace the cards you played (even if you’re paying more mana to get the effect). I’m not too satisfied with the energy producers this time around, but blue seems to be great for artifact based decks thanks to the improvise mechanic. I wouldn’t be surprised to see blue played more often if only to take advantage of the cards with the Fabricate mechanic from KLD.

I’ll be working on black next and should have it out on Thursday morning Japan time at the latest. I hope you picked up some good tips from this article, but if you have comments or if I have missed some key interactions with some cards that you think should be mentioned, please feel free to comment down below. Thanks for reading and good luck at the pre-release!