Kaladesh: Playing To Your Weaknesses – Red

In Kaladesh the color red gives you a choice: Speed or Fire. You can push your creatures as fast as you can and hope that speed wins you the game, or you can light a flame and watch it spread, engulfing everything it touches. Both the removal and creatures this time around are solid in KLD, and I expect that red will be one of the more sought after colors in draft. Fast, aggressive decks with a good top of the curve by and large will win more often than other slower midrange or combo based decks. Red gives you a lot of 2 and 3 drops to build in a strong finish.

I think Spontaneous Artist is one of the more dangerous energy cards in this format if you have the aether to spare. Giving any creature you control haste the moment it comes into play is a powerful effect. Seeing cards like this really make me think that Fabrication Module is going to be a high draft pick card. Having consistent access to energy will give you a HUGE advantage over your opponent, especially if your end game cards are also using energy. There are a good amount of gremlins and other energy effects in red to make this card good, so you’ll just have to choose if you want to supplement red energy with white or green. I personally am learning towards green at this point, but it will depend on the rares you get. 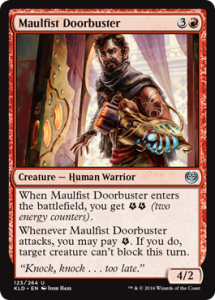 Another solid energy card, and even though it’s a bit of a glass cannon, Maulfist Doorbuster’s ability takes care of that. I don’t know how often you’ll be using his ability, but having the option to get rid of an opponent’s best blocker lead to some awkward blocking by them to stay alive. Seems like it would be good in a energy deck with some good combat tricks like in black or white. While I would splash the Artist in a 3 color energy deck, I don’t think Maulfist Doorbuster would make the cut. It’s alright in a 2 color energy deck, but in 3 colors I’d want something with a little more impact.

Speedway Fanatic seems like a fine card for vehicle laden decks. Giving the Aradara Express haste the turn it comes into play seems incredibly scary for your opponent, especially if you’re also playing Veteran Motorist to pump it up even further. An attacking 8/6 menace on turn 5 is incredibly hard to beat. It’s also a good card for non vehicle decks cause haste is a thing. One way or another, he’s going to put some pressure on your opponent. Good card to have at least one of, maybe even 2 of if you’re playing BR vehicles. 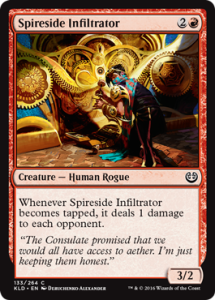 Another card that goes good with vehicles in your deck is Spireside Infiltrator. I like this card a lot more than I like the Night Market guy for one mana in black. Not only can this guy drive just about anything you put in front of him, its also a good attacker and doesn’t cost too much. Also good in a red deck with a few good combat tricks. Limited roleplayer.

I love cards that you can just set and forget. Quicksmith Genius is another great 3 drop in your curve that lets you rummage for cards whenever you play an artifact. There are going to be a lot of playable artifacts in this format so you can be sure to get at least a few activations from the Genius, allowing you to get rid of extra land or other cards you don’t need. It also will trade with a lot both on offense and defense. Another adequate 3 drop. Works good with Fabricate as well.

In the same vein as the Genius, Fireweaver sets up a good defense then attacks an opponent point by point, turn by turn with its ability. It’s not that good if you’re not playing a few artifact cards, but if you’re using a lot of Fabricate effects or have a Whirlermaker you can accumulate a lot of damage with him and put your opponent in an unfavorable situation. Also good with cards like Scrapheap Scrounger. 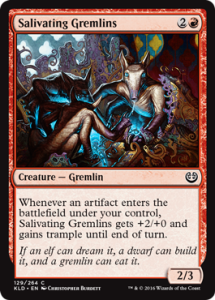 Speaking of Fabricate, Salivating Gremlins are REALLY freaking good with the effect. Putting a few servo tokens into play can easily make this a 6/3. It shouldn’t be too hard to consistently hit with around 4 damage, but saving all those ETB effects at one time can also bring your opponent to their knees if they can’t block. Good card for a vehicle deck, not so great in a energy one though. If you can draft 4 copies of them, I don’t think you’d be sorry. Very powerful in limited.

With all of the artifact creatures, vehicles, and artifacts in this format, you really can’t go wrong with a few of these in your red deck. About 1-2 main deck seems fine. You’ll definitely find some targets for them during the course of your match. They aren’t going to turn the tide, but they’ll give you a nice chump block and a swing of tempo when you destroy their artifact. I’m a fan. I think they’ll be rather popular in draft, so get at least 1-2 early if you see them. 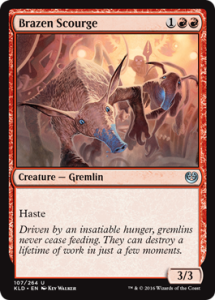 Can’t beat a 3/3 haste for 3 mana. This card can do a lot of damage if you play it early and your opponent has nothing but x/2 creatures for those first few turns. I expect it to sneak in a lot of damage in KLD limited. It’s only drawback is the double red in its casting cost, meaning you’ll probably be playing it in a 2 color deck. 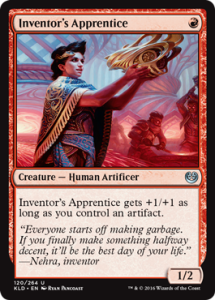 Inventor’s Apprentice is good if you’re playing an aggressive deck, like RW along with a Toolcraft Exemplar, and you shouldn’t have that much of a problem making it a 2/3. That’s kind of a big deal for a one mana card. Good synergy with Fabricate and vehicles, but probably not something you want to first pick in draft. Worth considering for your limited deck but not absolutely necessary I think. 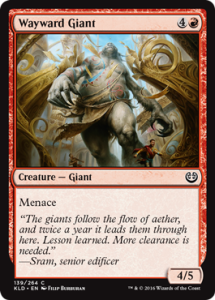 Big blocker, big beater, and hard to take down. I think every red deck wants at least 2 of these in KLD Limited. Possibly worth splashing as well. Grab it early in draft if you can.

I think that Welding Sparks is probably one of the best removal spells in red. you get a bare minimum of 3 damage at instant speed for 3 mana, but if you’re playing some Fabricate creatures, a few artifact creatures, and a vehicle or two the damage it can deal will add up very quickly. I wouldn’t be surprised to see it doing 5+ damage on average, taking out even the biggest creatures. I’d draft it highly, and grab 1-2 if I was able to.

Spark of Creativity can be tricky. It doesn’t always do what you want it to do. You should treat it as card advantage first and foremost. No matter what you’ll be be able to play a card, be it a land, creature, etc. About 60% of the time you should hit a non-land card, but even then we’re talking of a variation of 2-5 damage on average so even if you need it to do a certain amount of damage there’s no guarantee. I’m not saying it’s not worth playing, but just know the risks. I could see myself playing this as my 23rd card, especially if I’m in need of more removal. 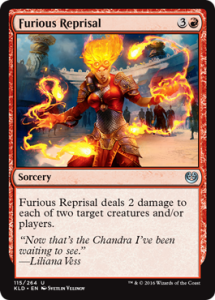 One card. Two targets. 4 Damage. Furious Reprisal could only be better if it was an instant instead of a sorcery. Still, I’ll take it and I’ll draft it high. It’s too bad you can’t target a player twice, but you can at least take out two creatures or burn a player and their creature. Great removal card in limited. Only draw back is that there are quite a few 3 toughness or higher creatures in this format, so it won’t be as effective as you think.

Energy decks are the real deal, especially if you can build up your reservoir quickly. I’ve seen some people get up to 10+ energy counters in a devoted energy deck, and that’s more than enough to kill anything in the format. It’s only 2 mana, an instant, and at worst it’s dealing 3 damage to a creature (which takes out a lot of targets). Yeah it sucks you can’t target a player, but if you’re playing red you’ll want a few of these in there. They are great removal spells that only get better the more synergy you have.

Other Cards that Could See Play

There are so many playable red cards that I’m at a loss. There aren’t many truly amazing cards, but when the red cards synergize they can be devastating. Energy decks can be good, drivers for vehicles are plentiful, and artifacts are both the life blood and the key to many strategies. Red is also highly effective in getting rid of other artifacts, so you’ll have no shortage of choices for doing so. The biggest problem you’ll run into is finding good supporting colors. Sometimes you won’t have any good green cards to make a energy deck, or white cards for a artifact/vehicle based one. However, once you find that card synergy I think you’ll be very satisfied with its power level.

I’ll be posting green tomorrow after my last pre-release, so be sure to check back then if you plan on doing some more limited in the near future. I should finish sometime on Monday with the remainder of the cards, and I’ll also have some deck lists and observations for you to pour over. Until then, be sure to leave any of your own observations or experiences down below and let me know how you feel about red in KLD limited.

One thought on “Kaladesh: Playing To Your Weaknesses – Red”