Kaladesh: Playing To Your Weaknesses – Green

Having already played in a few pre-releases, I can say that green is an important color. There is a lot of synergy with energy decks, and also a good amount of Fabricate effects. The removal is also better than I thought it would be, and it was made better by enchantment/artifact removal which is as good as a Murder in this format. Down below you’ll find my picks for green. 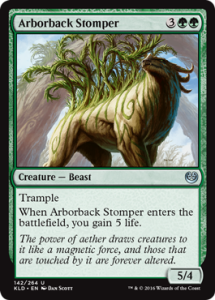 Arborback Stomper is already being heralded as the second coming of Thragtusk (minus the 3/3 token), and just so. A 5 point life gain swing is huge in close limited games where you’re trying to race your opponent, and being able to blink it with blue or white effects makes it even better. Attach trample to it and a sturdy body and you have an effective beater. I think this card will be a very high draft pick, and the more you can grab the better.

In a vacuum the Tiger might not be as good as the Stomper, but if your pool has more than a few ways to give you energy, then Riparian Tiger gets a lot better. It’s base stats already convince me that it’s playable. You get a 4/4 trampler that can attack one time as a 6/6 if you want, all for 5 mana. If you’re looking for a good beater this card is for you, and it’s great with combat tricks too. I don’t think having multiples of these is a bad idea either, but in proper limited decks, you don’t want to be too top heavy, so 2 copies is probably the best. The double green symbol will limit it to 2 color decks, but whatever you put it in should be fine. As a common there is a very good chance you’ll be able to get one.

I like Peema Outrider, mostly because of the trample but also because you can create an extra creature with it or make it a 4/4. Both options are strong in my opinion. Like the Tiger up above, it’s a good card to have with combat tricks. It’s not an amazing card but it’s playable and I think it’s a good 4 drop if you’re looking to smooth out your curve. 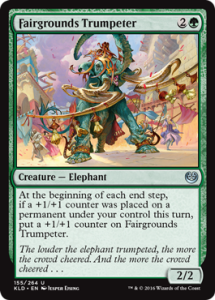 Fairgrounds Trumpeter is an interesting card. How good it can be all depends on what kind of deck you’re playing, and the obvious choice here is a Fabricate deck. Decks that have cards you’d rather fabricate counters on would go better with it, but it also has a nice synergy with cards like Ninth Bridge Patrol or Fabrication Module. Without a few of these synergies it probably isn’t worth playing, but when all the pieces fall into place it can become a very impressive card.

Longtusk Cub is a little bit different from the other energy based creatures in the set. The Cub actually gives you energy whenever it deals damage to a player, so you have an almost limitless amount of energy production if you can hit your opponent consistently with it. That’s not going to happen most of the time, but the ability is still a threat in the eyes of an opponent. You can play it early, get 1-2 good attacks in, and suddenly you are up 4 energy to use it however you want. Great card for energy based decks, but also a solid roleplayer in any other green based deck. Good to draft a few of these if you can.

Thriving Rhino is borderline vanilla, but being able to pump it up to a 3/4 the following turn when attacking is strong. This type of card works very well on a curve if you’re playing an aggressive GR or other energy deck and have other energy cards like Longtusk Cub to compliment it. Once you get one counter it becomes pretty tough to block and also becomes a great blocker on your side too. I liked this card and thought it was good in multiples. It’s one of the stronger 3 drop commons in the set, and think it’s good in a variety of green strategies. 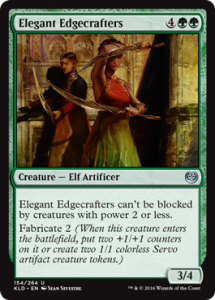 I think Elegant Edgecrafters are better as 3 creatures for 6 mana than as one 5/6. It’s not overpowering but a 3/4 body without the bonus is still playable in this format. It will block well, and it’s ability makes it tough for your opponent to team up and kill it with multiple cards. In some situations where your opponent has made tokens from all of their Fabricate triggers, bringing the Edgecrafters in as a 5/6 that can’t be blocked by any of their creatures is kind of a big deal. I like the ability to go wide or go big and force your opponent to block unfavorably. Take it somewhat high in draft if you see it, especially if your deck can support this as one of your 6 mana cards. 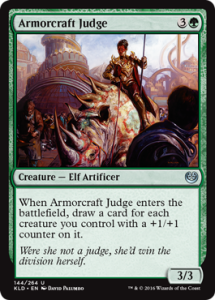 Between all of the Fabricate and Energy triggers that become counters, Armorcraft Judge seems like it would be a good card to get card advantage with. I don’t think it will be more than 2-3 cards if you play it late in the game, but that’s still kind of a big deal. Like I said above about the Trumpeter, a card like this would be great if you have a Fabrication Module in play, or even a Durable Handicraft. GW Energy seems like the biggest enabler of this card, especially if you open a Verdant Gearhulk. In a vacuum it’s not great, but I still think you should try to draft at least one. The benefit far outweighs the risk.

It won’t always make the cut for your deck, but Wild Wanderer is a decent card nonetheless. It pilots vehicles well, grabs you a land that ramps you to 6 the following turn, and should trade with a lot of attacking creatures. It’s only draw back is the lack of synergy with the main strategies. If it doesn’t fit in with energy, artifacts, or fabrication, it could have trouble finding a spot in the 23 card roster. 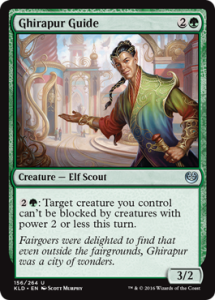 Ghirapur Guide’s applications are a little bit better than the Wanderer. It can directly effect the board state and turn your finisher into a unstoppable battering ram. If your opponent has been creating too many tokens instead of giving counters to their fabrication cards, they can suddenly find themselves at the mercy of this elf. Late game, with even a simple common like Cowl Prowler you can easily finish off your opponent. Punish your opponent for going wide, or force them to block with their powerful creatures so you can take them out. Relatively high draft pick.

Going into non-creature spells, it doesn’t get better than Appetite for the Unnatural. This is as good as any Doom Blade or Incinerate that we had in previous limited formats thanks to the ubiquity of artifacts in KLD. It hits servo tokens, vehicles, and even Gearhulks (should your opponent get one). Having one of these in your main deck is a must, and drafting a few is going to be very important in limited. Get 2-3 if you can, and save the rest in your sideboard. High draft pick. 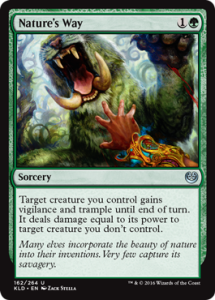 We don’t have any 1 mana fight cards this time around like Prey Upon (SOI), but Nature’s Way does a good job of getting rid of opponent’s creatures if you’re playing green. The vigilance and trample is nice (especially if your opponent has a lot of chump blockers), but being able to deal damage and not take any in return is what I like the best. High pick in draft if you’re in green. Grab a few of them if you can. Only draw back is if your guy gets killed in response to the spell being cast. Shouldn’t happen too often though.

Hunt the Weak makes a return to standard in KLD, and it should see some play in KLD limited. I like the first 2 removal cards I talked about previously, but Hunt the Weak will get the job done most of the time. It pumps your creature and usually gets rid of your opponent’s , but that 4 mana to cast and sorcery speed hurt it. I don’t expect them to go too highly in draft, but don’t let them pass you up. Removal is removal.

Pretty freakin sweet. Easy to cast and after a few turns you’re bringing in every creature you play with a +1/+1 counter on it. Draw it late game and have a board full of servo tokens? Boom, auto anthem effect that buffs up your entire army. Like I said above, this is an amazing card with Armorcraft Judge, and also works well with Hazardous Conditions in a GB deck. I expect it to be a high draft pick, and it’s absolutely something I would splash if I could.

Other Cards that Could See Play

Green has strong creatures, but not as strong as they have been in past sets. Their synergy with other cards has been improved, and they’ve also gained a lot more interesting abilities which make them a lot more versatile. You won’t see too many decks with green as their main color, but you will see it complimenting other colors a lot. I found that GR energy decks were really good during the pre-release, as well as GB decks that had a lot of good removal to fall back on. I also wouldn’t be surprised to see GW decks put up some good numbers as well since they join the effects of fabricate, energy, and artifacts so well.

Only one more article to go! I hope everyone’s pre-release weekend went well though and that these articles will hold up and help you out in your next limited endeavor, be it a GP, draft, or a future limited event. I’ll be talking about multicolor, artifacts, and land in the final article and you can be sure it will be a doozy after looking at how many artifacts alone are playable in limited. Thanks for reading and check back soon for the last part!

One thought on “Kaladesh: Playing To Your Weaknesses – Green”