In Kaladesh, green was all about the energy. It had a number of cards that added energy to your total count, and quite a few cards that could take advantage of it. Green also had more removal than usual when you take into account artifact removal which is just as good as a Doom Blade in this format. The only drawback I saw with green in Kaladesh was that the creatures weren’t as powerful as they had been in past limited formats. The synergy was there, but nothing that echoed the “stompiness” of past sets. For a list of what cards I chose from Kaladesh, please follow this link.

By far one the best non-rare green creatures in this set is Ridgescale Tusker. He’s not playing around when he enters the battlefield. If you have been building up your token army with Fabricate triggers and Sram’s Expertise, they will be absolutely huge when the Tusker drops, and when you add a card like Winding Constrictor or Rishkar into the mix this card becomes incredibly overpowered. You will absolutely crush your opponent when you play this if you’ve developed your battlefield. Great way to break a board stall, and amazing if you can blink or bounce him for even more value. Hard to splash, but should see play in every green limited deck. High draft back, maybe even a first pick.

Maulfist Revolutionary fits perfectly into either +1/+1 counter decks or energy. Whether she’s dying or joining the party, she’s giving you a bonus. Even in a vacuum without any energy or counters to add, she’s still a 3/3 trampler for 3 mana which is strong in my book. Great card to play with combat tricks, puts pressure on opponents, and is difficult to kill. Not for every deck, but I’m sure a lot of people will use her. Another card you don’t want to pass in draft. 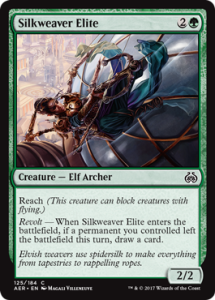 Seriously? Did green go to value town after Kaladesh because not only are these cards well costed, but they also have a variety of helpful abilities on them. With the sheer number of flyers in this block, having a card with Reach is a must if you’re not playing any flyers yourself. Silkweaver Elite isn’t a great blocker, but will trade with a lot of the birds and thopters. If you can manage to put some +1/+1 counters on it, the Elite will become a strong asset. You might not always get the Revolt trigger, but it’s still a roleplayer for green where you don’t see many flying creatures.

A little heavy on the casting cost, but I think Revolt is easier to cast if you’re playing it later on in the game. You can throw a token creature at your opponent then get the bonus when Lifecraft Calvary comes into play. If you’re playing green you should have a chance to pick up a few creatures with Fabricate, which will make activating a Revolt trigger a little more consistent. Good beater, and the Trample ability is welcomed after so many sets of seeing your 6/6 creatures get endlessly chump blocked.

It’s the biggest of the energy/token cycle, and probably has the highest odds of being able to activate more than once. Decent sized body, adds energy if you need it, and gives you a token on the attack. Seems playable enough. I’d be a little more hesitant cutting this card than I would the others in the cycle.

The deathtouch is nice, and the 2 toughness on a 1 mana creature, and the ability to come into play as a 2/3 deathtouch creature later in the game also gives Narnam Renegade points for playability. Having removal on a stick has been part of green or black’s playbook for a while now. This elf warrior is a good blocker early on, and also hard to block with tokens. Good card for a deck with lots of combat tricks. I’d much rather have him than the Aether Poisoner.

Yet another reason to build a GR energy deck. You can’t go crazy with its power like you can with Electrostatic Pummeler, but adding a 4/3 body with trample to an already stacked and aggressive energy deck is icing on the cake. Aetherstream Leopard is a threat no matter how you slice it. You’ll get at least 4 damage in one time, and if you’re able to keep the energy coming it will keep the pressure on. Great card to have between Voltaic Brawler and Bristling Hydra.

At first glance I thought this was a so-so card because all I saw was its second ability, but once I saw that it gives you energy equal to the your highest powered creature, I was overwhelmed with joy. This is just what energy decks need. Instead of playing non-threats that give you energy to keep your creatures fed, Peema Aether-Seer gives you a capable creature as well. I probably won’t end up using that second ability too often, but if I can find a way to bounce this creature back to my hand so I can refill my energy indefinitely I’ll be a very happy camper. Must have if you’re playing GR energy!

This is pretty cool. Monstrous Onslaught is the closest thing green will ever get to a Fireball effect. I think most of the time it will be able to deal between 5-6 damage, which is good enough to kill 2-3 creatures, but on that rare occasion when you can use Siege Modifications on a Consulate Dreadnaught, this card can deal some serious damage to an opponent’s creatures. While it won’t be great in faster aggro decks focusing on the quick kill and filled with 2-3 drops, if you’re playing a midrange deck this card is super effective. Tempted to say it’s first pick worthy, but going to say it’s a high draft pick instead.

Even though green creatures in Kaladesh and Aether Revolt aren’t massive like they used to be (Scaled Wurm, I’m looking at you), that doesn’t mean they aren’t fighters. Prey Upon, the most efficient green removal, is back. It joins Nature’s Way and Hunt the Weak, making green somewhat more dangerous than it has been of late. Of course if you have some white exiling effects of black kills spells you’ll want to play those over this, but if your removal package is lacking Prey Upon is more than up for the challenge.

Phew, just made it before the pre-releases! Green supports other colors well, but I think GR is still the best combination. I used GW tokens at my first midnight pre-release,but GB showed up quite a bit as well. While green wasn’t overpowering, if left unchecked it can get really out of hand. I still believe that GR energy will be dangerous too.

I’ll be doing the main pre-releases this weekend, so you might not see me do the artifact article until (at the earliest) Saturday night. There’s a lot to go through and there are some scary good synergies to play around with, but that will have to wait for another time. Thanks for reading about green, and be sure to leave any comments down below if you want to suggest something or re-evaluate one of my choices. Hope to see you back soon for the next installment!