So the pre-releases came and went. I did 3 on Saturday, and decided to call it quits there after a disappointing outing. I had done really well at the Kaladesh pre-release, but I felt like I was totally unprepared at the Aether Revolt pre-release. Perhaps I didn’t take advantage of the new mechanics enough. Perhaps I should have prepared a little bit more and finished all of my evaluations before playing (seeing as artifacts make up a huge part of this format, I was definitely missing out on some of the cards being played). Perhaps my mood has become dour by the recent standard bannings, or maybe because my pools weren’t that great (I felt like I had good cards but not enough to use in a deck. Very unbalanced and few synergies with no bombs).  Whatever the reason was, I didn’t really enjoy playing. It felt more like I was going through the motions like I always do instead of having fun and building fun decks.

I’ll be going into a little more depth about my decks, pools, and choices in the next article, but for now I’m going to continue with the series with Artifacts. I had made a few mistakes and wrong evaluations with a few of the cards last time because I didn’t have a solid understanding of the limited environment, but I feel like I have a better grasp now. Here are my choices for Aether Revolt. 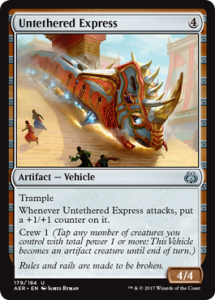 I really underestimated the Renegade Freighter, a.k.a. “Pain Train”, in KLD limited. That card ended up being a great beater. I won’t make the same mistake with Untethered Express, which is even better. It may cost one more mana, but it’s easier to crew and gets bigger each time you attack with it. It’s even better as a blocker than Renegade Freighter since it starts off initially with 4 toughness. If I could only choose 2 vehicles for my deck, one of them would most likely be the Express. Limited all-star.

It’s not overly powerful or easily cast, but Mobile Garrison is a versatile vehicle. The 3/4 body isn’t going to die easily on the attack, and being able to untap a creature so that you aren’t left defenseless or untap an artifact to use again like Pacification Array is a useful ability. The crew cost isn’t to high either. While it isn’t the most powerful, I feel like Mobile Garrison could end up in a few decks that synergize with it.

The main reason you’d play Daredevil Dragster is for the card advantage. You get two good blocks in or two good attacks, then you get two cards in return. If you’re playing a deck that isn’t running much card advantage, this could help you out a lot. It wouldn’t be my first choice vehicle in limited, but I think it’s playable.

Irontread Crusher is this set’s big, dumb, beater. It’s bigger than Bomat Bazaar Barge, easier to crew than the Aradara Express, and easier to cast than Ballista Charger. While there isn’t anything special about it, you can’t pass up that 6/6 body. It’s hard to block, and blocks very well. I expect it to see a lot of play, especially since it’s a common.

Moving on to the regular artifacts, we find Treasure Keeper leading the pack. This card is probably better than Matter Reshaper from Oath of the Gatewatch in limited. When you’re running 17 lands out of 40 cards, you shouldn’t be too worried about hitting your land drop after casting the Keeper. He’s basically two cards in one, trading with another creature then replacing himself upon death. While you might hit a vehicle sometime for 3 mana, more likely than not I think you’ll hit a creature. Most decks will have quite a lot 3 mana cards, including removal, which Treasure Keeper can cast since the card is not a permanent. Nothing would be sweeter than killing of of their creatures with him, then hitting a card like Hungry Flames which kills another one of their creatures and does 2 damage to them. Very high draft pick.

While you can’t go infinite with Wandering Fumarole in AER limited, you can still end up activating the Construct’s ability a few times a turn. Cards like Pacification Array’s tap ability, or getting energy from a Consulate Turret should activate it, but also activating energy abilities or crewing vehicles should cause a trigger as well. I wouldn’t be surprised to see some decks take advantage of this and have 2-3 triggers a turn for it. Strong card in this format I think, all around roleplayer on both offense and defense. 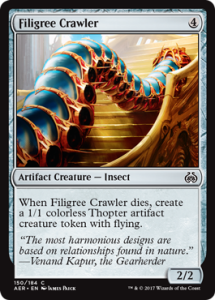 Whenever I can get 2 creatures with one card I see value. The 2/2 body isn’t anything special, but getting a 1/1 flyer after it dies is nice. This card won’t be winning you any games, but it’s a good card to help fill out your deck. If you’re looking for a 23rd card, Filigree Crawler isn’t that bad. 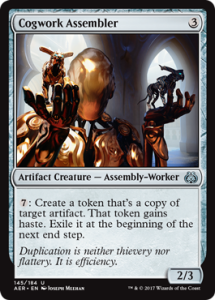 Will you be using Cogwork Assembler’s ability often? Probably not. Is it nice to have? Definitely. If you’re on a stalled board state and nobody wants to attack late game, Cogwork Assembler is a nice play. You can make copies of your vehicles turn after turn and throw them at your opponent, or you can make a copy of an artifact creature like Chief of the Foundry to pump up all of your servo tokens from Fabricate effects. It fits on your curve well, has good defense, and isn’t worthless late game. Sounds like a good draft pick to me.

I remember when Juggernauts were 5/3 creatures. Now they’re 7/5’s that can be played as soon as turn 4 in some situations? Yikes. In the right deck, this can be a huge play and extremely difficult for your opponent to get rid of without sacrificing at least 2 creatures. Sure artifact destruction is rather common, but Barricade Breaker is a beast. Pretty good as a finisher, even better as a beater.

While it doesn’t have Improvise, Reservoir Walker seems like a decent card, The 5 mana seems a bit high, but for the extra mana you’re getting 3 life and 3 energy, which is both a tempo play and helps you out if you’re playing a GR energy based deck. It might not always make the cut in my limited deck because I’m reserving the 5 mana spot for beaters/finishers, but sometimes I could see it being a big help.

I like this as a cheap form of pseudo removal. Tapping down their big creature before it attacks or getting rid of a blocker is rather useful. Being able to tap an artifact like Aetherworks Marvel before they get energy to use it, or tapping a vehicle like Smuggler’s Copter pre-combat is also very useful. If my removal wasn’t that good, this would definitely have a spot in my deck.

That does it for artifacts. I still have the multicolor and lands left in my next article, and I’ll be talking about what I did right and wrong at the pre-release when building my decks as well. Hopefully it will be out before the weekend so you can look over them before you start drafting at your local game stores. I’d love to hear about how you built your decks and what worked/didn’t work for you down below in the comment section so that I might realize my mistakes and do better in the future. Until next time then.