Bang for your Buck: Investing in Cards for Amonkhet – Red, Green, and Artifacts

Aside from the cards you’ll find in GB Constrictor and Mardu Vehicles, there are very few green and red cards that have seen any play over the last few months. Old stand-bys such as Tireless Tracker have kept their value since before Dragon’s of Tarkir’s rotation, but quite a few cards haven’t had their chance to shine. I’m hoping that Amonkhet standard can reverse the fortunes of some of those cards and give them one last hurrah before they fade into Frontier or commander. Let’s take a look at what I suggested last time and how they did. 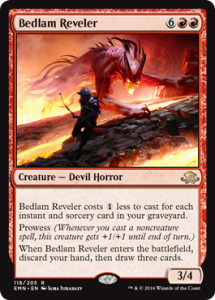 With both Modern and Frontier applications, I think you can’t really go wrong picking up a play set of Bedlam Reveler at $1.25 each. It should drop a little bit more before rotation, but I think in the long run it’s going to end up being a great card for tempo and cantrip decks. Don’t expect it to go up any time soon, but this is the type of card that can break out sometime down the road in eternal formats. Definitely not bulk. I wouldn’t be surprised to see UR Prowess decks show up again in AKH format either now that Magma Spray has been reprinted. 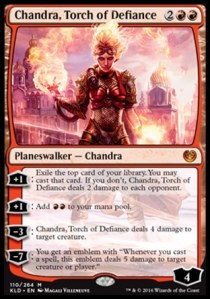 I really don’t see Chandra getting below $20 until she rotates next year, so if you’re looking to pick up a few for standard, you won’t do much better than her current price of $21.75. I’ve yet to see her selling for less than 3000 yen here in Japan, and her buylist price is always near 2000. If midrange and red control decks such as Grixis or UR get better in this new format, expect her price to go up significantly. I’m guessing $25-26 by next set to be on the safe side.

I still like Hanweir Garrison at $1.50, and I believe that RW humans will be playable again so if you’re going to play that deck between now and rotation you can get them cheap. There is a good possibility it could see a spike before fall. If you’ve seen my recent deck creations, then you know I’m really enjoying the possibilities of Kari Zev’s Expertise ($1) and Fling. Seems like a fun combo to use against GB constrictor and GR Energy decks that play lots of big creatures. Might show up in more sideboard’s as well.

Speaking of GR Energy, I think it will show up at FNM’s more often now that the Saheeli boogeyman is gone, so some of their staples like Lathnu Hellion ($.50) could show up again (and possibly in Jund energy decks as well). I’m also convinced that Pia Nalaar will become a staple in some decks later this season or in the next one, and I feel she’s undervalued at $.50).

I know she still seems like a long shot, but I think Delirium and other midrange decks will finally be able to play her once the metagame has settled. I’ve seen her in early tournaments in Jund and Naya superfriend decks and while she won’t become a 4 of, I could see her being a 2-of in a few decks. Now $4, but might hit $6-7 with some limited amount of play. I think $4 is her bottom, as it is with most planeswalkers.

Rishkar, Peema Renegade used to hold a bit of value, but since GB has taken a back seat to Mardu Vehicles and Saheeli combo, his price has dropped to $2.50. I think there will be a resurgence of GB constrictor decks in the AKH metagame, as well as other midrange decks that can put Rishkar to some use. The higher demand makes me believe he will make moderate gains this summer and settle between $4-5.

This used to be a $20 card when GB was on top of the metagame with Vehicles, but Verdurous Gearhulk has since fallen to a very affordable $9.75. I don’t see going down that much further, and if anything it should see steady play for most of its standard life. Besides being a staple of BG Constrictor decks, it could see play in GW tokens or GR beatdown in the near future if those decks can put up some good results. I don’t think it will hit $20 again, but I wouldn’t be surprised to see it back around $15 by the summer.

I don’t see Tireless Tracker making any more gains while she’s in standard, though she should hold it until it gets closer to the next set. If you’re not planning on playing green or using Tracker in any of your decks, you might benefit more from trading her away at her current value of $7.75 or buy listing for a little bit less. It should be a good card for Frontier so if you wait for rotation to pick it up for less than half the current price, you should be able to.

Bristling Hydra ($1) is still a good card to have for GR energy decks, and it’s been showing up more and more in other strategies such as GB Constrictor to get around removal. I can see this as a $2-$3 card by the end of the summer.

How is Aetherworks Marvel not a $10 card? Marvel decks are strong, but hardly format warping like Saheeli combo was. Turn 4 Ulamogs are incredibly powerful, and while the deck doesn’t always hit him, when it does it pretty much signals a game win. It should continue to put up good numbers at large tournaments and be a solid choice against Mardu Ballista, GB Midrange, and control decks. At $5.75, there’s a lot of upside left for this mythic rare artifact. 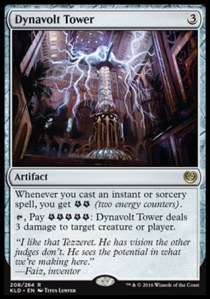 Dynavolt Tower ($1) might seem like a long shot and more of a penny stock choice, but now that the format has opened up a little more, I could see it making a comeback in UR Prowess decks both in the main or sideboard, in Temur Tower/Control decks, as well as back up for Aetherwork Marvel decks if they have problems getting out Ulamog. My guess is it will hit $3 in a few months. It could go even higher if control decks adopt it in their sideboards as well. 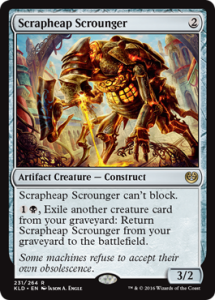 Yes there is more artifact hate now, as well as Magma Spray that Scrapheap Scrounger has to deal with, but it’s such a good fit for a large variety of decks that I don’t think it would hurt to buy in now at $2.25 each for your playset. Of course it works well in Mardu Vehicles, but it also sees play in Dredge (which gets better in this format), GB delirium and energy decks, and even BR aggro that focuses on discarding. I’d be surprised if it didn’t get back up $4 or more this summer.

I know that aggro decks such as BR Vampires haven’t done too well late, but thanks to cards that benefit from cycling and discarding like Hazoret, I wouldn’t hesitate to pick up some Key to the City at $.75. I don’t think it will be a 4 of in those type of decks, but as a budget aggro choice I think it’s a solid choice. It also has a lot of time left in standard, so even if it’s not amazing in this format, it could be a break out card in the fall.

Metalwork Colossus ($1) is another card that had a fringe following before the format was warped and it could make a comeback at casual and FNM tournaments. There are some neat new Amonkhet artifacts that could find their way into a Colossus deck and with Hour of Devastation there just might be enough decent artifacts to give the deck legs again. Seems like a deal at $1.

A lot of these predictions are hinging on the Amonkhet metagame being more balanced than it was in AER standard, so if we get a strong rock/paper/scissors set up between aggro, midrange, and control than I think prices on a variety of cards will see a slight increase.

Another thing to consider is that we are coming up on rotation in the fall, which means that more than 50% of the card currently in standard wont’ be doing much at all value wise. We’d be lucky to see 10% of the cards from BFZ to EMN spike over the next few months due to an improved metagame. The most value to made is going to be made from the newer sets cards that haven’t been able to break out yet.

That’s going to do it for this article, but I’ll be back with multicolor, colorless, and land cards once the Pro Tour is underway this weekend. Hopefully I don’t miss a huge card that spikes, but if I do then I apologize. Like the rest of you, I hope we see a balanced Pro Tour that doesn’t have 6 Mardu Ballista decks in the top 8 again. With more playable decks, it opens up a world of possibilities.