Bang For Your Buck: Investing in Cards for Amonkhet – White, Blue, and Black

We’re still about a week out from Pro Tour Amonkhet, and while Mardu Vehicles seems to be “in the driver’s seat” so to speak, there have been quite a few rumblings happening at both the local level and at some of the bigger events. The SCG Open was at the start of May, and last week in Japan we had both the Big Magic Open in Yokohama (360+ players) and Card Box Open (180+) in Kyoto. With the emergency banning of Felidar Sovereign, Control seems to finally be establishing itself once more. For too long we’ve been without counterspells and board wipes in standard and because of that aggro decks like Mardu Ballista have run rampant. Both UW variants using Approach of the Second Sun and Temur variants running the likes of Torrential Gearhulk and Dynavolt Tower have been showing up more frequently, and by the time the Pro Tour is over, we could be back to a more true rock paper scissors format with midrange, aggro, and control.

Aside from control, lots of decks from Kaladesh and Eldritch Moon standard seasons are also seeing the light of day again. RW humans, Dredge, UR Alchemist Burn, and GB Constrictor are just a few that have returned after an absence. So what can we expect to see this standard season and how will it affect the prices? Well, let’s start off with what I suggested last time and see what’s happened since January.

Man I did poorly last time. Saheeli Combo and Mardu Ballista warped the format so much that there really wasn’t any value in other cards that didn’t appear in these decks. With a lot of these card rotating after the summer, their chances of seeing play once more are rapidly decreasing. Hopefully it will be different this time around. Let’s see what we have to work with for AKH standard.

Thalia’s Lieutenant ($2.25) can still go down a little more, so keep an eye on it over these next few months. It should see one more spike in W or RW humans, but afterwards it should be a good card in human decks both in modern and Frontier. At sub $2, I think it’s a good investment. If you’re going to play humans in AKH standard, buy them now, otherwise wait a few months and get them when they hit $1.50 or so.

RW or mono white humans is going to be a solid deck for FNM and possibly some larger events depending on the metagame, but I don’t see Always Watching holding its $5.25 that much longer. It will probably start dropping right before or during Hour of Devastation, so if you’re not using your copies this standard season, you can make some cash now. 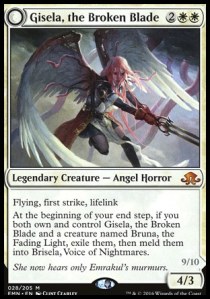 Removal in standard has finally picked up to the point where Gisela shouldn’t be that much of a threat in the air anymore. I think with a faster metagame she won’t be able to put that much pressure on players like she could in the past. At $8, I don’t think she’ll see any more spikes before rotation, even if Bant Angel Aetherworks does well. She’ll end up as a $4-5 mythic, so if you want to make some money while you can, this standard season is probably the time.

Fumigate ($1.50) seems like it would be a good choice for a metagame full of zombies, humans, and Constrictors, both main board in control decks and in midrange sideboards. I wouldn’t be surprised to see it double up to $3. The last time control was playable in standard, cards like Languish hit $5+. There are lots of choices in this format, but Fumigate is one of the favorites. Cataclysmic Gearhulk ($1.25) is another card that I think is undervalued and could see some sideboard play in the future. I really liked it against planeswalker and vehicle heavy decks that Fumigate type removal does poorly against.

It’s slim pickings for blue before rotation. The staples like Torrential Gearhulk have already hit an uncomfortably high price, and other useful cards like Disallow aren’t really a deal that you can make a lot of money on. Quite a few blue cards are long shots, but if control does better in this standard metagame like I’ve been saying, then cards like Thing in the Ice ($4.75) could see another spike before rotation. It usually sees 4-of play in UR prowess/control/burn decks, and also shows up in some control sideboards as a card to put pressure on opponents with. If we’re lucky, the card could hit $6-7 in AKH standard and then you can get rid of them for a small profit.

Baral’s Expertise always seemed like one of the best Expertise of the entire cycle, and at $1 it’s not too much out of pocket. I wouldn’t be surprised to see it show up in a few control decks in their sideboards. Could see more play after rotation too. Sphinx of the Final Word ($1.50) might see more play in control mirror matches, as well as in the new Approach of the 2nd Sun combo deck to push through their combo, so keep an eye on it. It might see a spike over AKH standard if control gets big. Look for the price to go up and sell it for a nice profit if you can buy them cheap. I think Whir of Invention ($1) is another good pick up, even as a casual card. This card could appreciate nicely if it sees play in any fringe decks in the future like Aetherflux Reservoir since it will be a 4 of. Hour of Devastation might have some good artifacts to tutor for as well.

There aren’t too many good deals in black at the moment, but I think Noxious Gearhulk is a good investment at $3. It won’t see any immediate play, but as midrange adapts to the various aggro decks in standard, you’ll start to see some more Gearhulk play. It still has a long time left in standard, so it wouldn’t hurt to grab them while you can. Being a mythic rare, the further we get away from Kaladesh’s release date, the more likely it’s price will go up. I expect it to double up by rotation, but it could go even higher.

Mono black zombies is a very powerful deck and I expect to see a lot of it at the Pro Tour. However, if you’re not going to play the deck then you should get rid of the deck’s staples over the next few weeks. Cryptbreaker is currently selling for $7, and it won’t hold that price for long if it doesn’t have some top finishes over the next few weeks. It will probably do well, but with rotation looming it’s not worth hanging on to for an extra dollar or two. Zombies could be a good deck in Frontier, but that won’t prop up the current pricetag.

I think Diregraf Colossus still has some upwards movement from $3.50, so if you bought yours when it was a bulk rare look for the price to get close to $5 before getting rid of it. You could sell sooner if you want, but I think the price still hasn’t caught up to it like it has for Relentless Dead and Cryptbreaker.

Holy shit. I remember feeling bad about getting these at $8-10 then having the promised zombie deck not appear a few standard seasons ago, but it’s now almost an $19 card. As I said about Cryptbreaker, the zombie deck is amazing in standard and will get a lot of wins, but if you’re not going to play it, now’s the time to cash out.

Dark Salvation ($1) should see a nice spike if zombie decks do well in AKH standard. If you have any you can sell them for a nice profit in the coming weeks. If you can pick some up for cheap, there is a good chance you can make a small profit off of them in the near future.

Glint-Sleeve Siphoner should see more play in BG and Jund energy decks. It’s a respectable card, and worth more than it’s current $1 price tag. It will also be around for a while, so it’s a good long term investment if you’re an aggro player.

Amonkhet has done a lot to re-energize past standard decks like zombies, so I wouldn’t be surprised if a few more older strategies like UW Spirits were to show their face again, and with Hour of Devastation we might just get some decent artifacts to make Improvise deck worth playing or some better Embalm cards that work great in delirium.

I’ll be talking about red, green, and artifacts in my next article (hopefully before the pro tour), but if you have any comments or other suggestions about white, blue, and black in Amonkhet standard, please feel free to leave your comments down below. Thanks for reading and stop by again soon!