Hour of Devastation – Playing To Your Weaknesses – Blue

If you’re curious as to what I picked in my last blue article, you can find the link to it here. Blue gave us some good flyers and a lot of good tempo effects in Amonkhet, but aside from that I didn’t find that impressive. There were some good support cards, but nothing that really pushed a player into blue. Hour of Devastation seeks to change that, but whether it will succeed in doing so is still up in the air. Let’s take a look at some of the new blue cards in the HOU/AKH limited format. 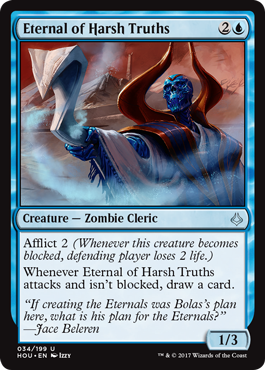 You’ve probably seen the new gods, one of them being the blue and black zombie one. Blue is pushing into zombie territory in a big way. Aside from the Eternalize and Embalm creatures in blue, there are some zombie typed creatures now as well. Black will still be your main source of the undead, but if you’re splashing blue for the Scarab God, adding in Spellweaver Eternal and Eternal of Harsh Truths will give you a few more options. Spellweaver Eternal is the more aggressive of the two, but it’s also the weaker. Prowess is nice, but it won’t be that easy to activate. I like that you’re guaranteed at least 2 damage though thanks to its Afflict ability. Eternal of Harsh Truths is much better thanks to its second ability. Your opponent would probably want to take 1 damage later in the game than take the 2 damage from the Afflict trigger, but because you’re playing a bevy of tempo spells in blue, there’s a good chance you’ll get to draw a card with the cleric regardless. Not game winners, but role players in UB or UW Zombie limited decks.

Two cards that could possibly go well in a Zombie themed Embalm/Eternalize deck are Vizier of the Anointed and Sinuous Striker. The Vizier has a nice back side but more important it tutors one of your soon to become zombie token cards. That would be nice in and of itself, but you also get to draw a card whenever you create a zombie token from your graveyard. Again, UB and UW seem like great colors for this type of strategy. Searching up a card like Honored Hydra to put into the graveyard would also work in UG, but I would probably splash green in as a 3rd color instead.

Sinuous Striker isn’t anything special on the top side, but when it comes back from below you get a decent sized beater that can pump itself up to 7 power on an open battlefield. I’d take the Vizier a little higher in draft than the Striker, but both would be good choices for one of your 23 main deck cards.

Vizier of the Anointed – RATING: 3 Stars

Blue’s offering of flyers this time around isn’t bad but I thought Amonkhet’s were slightly better. Together, they should be a forced to be reckoned with though. They all fit rather well on your curve, and each has a unique ability that you can use to your advantage. Aerial Guide lets you boost one of your ground-based creatures into the air for an attack, while Aven Reedstalker gives you the element of surprise with its Flash ability. By themselves they won’t impact the board that much, but their tempo effects will be noticeable.

My favorite blue flyer though is Ominous Sphinx. Besides being a huge beater in the air, it has an amazing ability that will really screw up your opponent’s combat damage choices. Suddenly, blocking with multiple creatures to kill a bigger one becomes a liability. There are tons of cycling cards to choose from and cards that have discard effects, so I expect you’ll be able to take advantage of the Sphinx’s ability rather consistently. Limited all-star. High pick in draft, possible first pick.

The only other remaining creature in today’s article is Striped Riverwinder. Awesome finisher in limited. You won’t always hit 7 mana consistently which is fine since you can just cycle the Riverwinder away for a chance to play something else, but when it DOES hit the ground it becomes incredibly hard for an opponent to get rid of. A 5/5 hexproof blue creature along with the 6/7 Scaled Behemoth in green or even the Vizier of Many Faces in blue will finish an opponent very quickly in the best case scenario, or in the worst case you’ll lose it to an opponent double blocking it but if that happens you’re winning through attrition. You don’t need a playset, but grabbing 2 for your blue limited deck gives you an impressive top of the curve.

I’m usually not too big on counterspells, but I kind of like Supreme Will and Countervailing Winds. My favorite is Supreme Will because if you find it disadvantageous to counter a card later on in the game, it lets you use a super charged Anticipate effect to set up your next play. Countervailing Winds is at worse a cantrip effect, but as we’ve seen in AKH limited, Cycling effects are strong when paired with certain cards and if you’re playing a quick UW flyer, UR,  or other blue deck the change in tempo could be big. It’s just too bad that it’s 3 mana. Would have been better at 2. But it’s a common, so you can’t really complain. 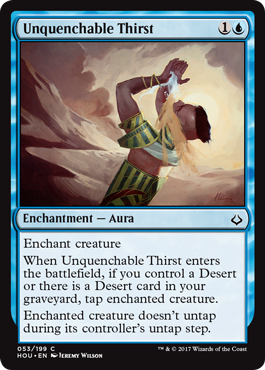 My final two picks for blue common and uncommon cards in AKH/HOU limited are Unquenchable Thirst and Imaginary Threats. Just like the camel and pacify effect in white, blue gets a Claustrophobia type effect, but for only 2 mana. Having a desert lets you tap a creature AND keep it tapped, but even without one it’s still a good card that can shut down your opponent’s large threats. The problem is once you play it, your opponent will play around it. This is where the desert effect becomes useful because you can just tap it down regardless.

If you’re playing a deck with superior creatures, Imaginary Threats can be back breaking to an opponent. If you’re in more of a beatdown deck though, this card would also combo well with a fog effect. Make your opponent attack and leave themselves totally open to an alpha strike the next turn. If the odds aren’t in your favor, just cycle it away. Great tempo card.

There weren’t as many playable cards in blue this time, but they weren’t horrible for the most part. The UW Flyers archetype probably gets the biggest boost from Hour of Devastation, but I wouldn’t underestimate various blue zombie builds either in this format. Thanks to Nicol Bolas, there should be a few ways for you to play a 3 color deck, which is where I think blue will shine. If you play Esper Flyers or Zombies, or even Grixis discard/cycling strategies, blue will play its support role well.

Phew. Things are coming along at a rather nice pace. I should be able to get black done by tonight and after work tomorrow Red will be right on its heels. Thanks for reading and be sure to leave any other thoughts on HOU limited blue cards down below! Check back soon for the next installment!