Hour of Devastation – Playing To Your Weaknesses – Black

Black was probably one of my favorite colors in Amonkhet limited. The removal was great, it had some interesting creature synergies that made for some sweet decks, and I thought that many of the cards were perfectly costed. Will Hour of Devastation black cards help the color to retain its edge over the others? Which of the black archetypes will benefit the most from the new set? Well let’s take a look and speculate as to how the cards will work with Amonkhet. By the way, if you’re interested in my picks from Amonkhet, you can follow this link to see what I chose.

If we are talking about black, then we simply must start out with zombies. Hour of Devastation gives the AKH BW zombie decks more threats to play with, but also helps out the new UB zombie archetype as well. Each of these new zombies have their strengths and weaknesses by themselves, but when joined with their brethren in a limited deck, they will play their roles very well.

Merciless Eternal is my favorite of the group, as it has the Afflict as well as a pump ability. It seems like it would be right at home in an aggressive Zombie beatdown deck, especially if you can get a card like Lord of the Accursed to boost its power and toughness. The mana cost isn’t too high, and being able pitch a card for a +2/+2 boost at any time will come in handy on both offense and defense. This card is meant for dealing damage one way or the other.

I also like Accursed Horde in a Zombie/Zombie token deck. Sure you can give your regular zombies indestructible, but where this will really come in hand is when you Embalm or Eternalize something. Once those tokens are gone, so is that creature, forever. Accursed Horde helps to keep your Dreamstealer or Honored Hydra zombie tokens alive and threatening for the low cost of 2 mana. Carrion Screecher has the honor of being one of those rare flying zombies, which means that you’d play it regardless of its typing. A 3/1 flyer for 4 mana isn’t bad, though it won’t stay alive if your opponent has any flyers of their own. Marauding Boneslasher is a good aggressive card on your curve, and it shouldn’t have any problem blocking in this limited environment due to the easy access to zombies or cards that create zombie tokens.  It’s nothing special, but an easy include for any zombie deck.

The BR Cycling archetype gets a few more cards, but I’m not convinced it will be enough to push the deck the top of the limited power rankings. Vile Manifestation is like the cycling Tarmogoyf, and in a dedicated limited deck it could be huge. We’re talking a possible 2/4 on turn 3, and the longer a game goes the more threatening it becomes. It’s both good to draw early and late. Sadly, 4 toughness isn’t that good against burn spells anymore (watch out for Cut/Ribbons), but it should stop a large number of attackers in this format and trade favorably against heavy hitters too. Very good cost to power ratio on this card.

Grisly Survivor seems like it would be a good roleplayer in the BR Cycling/Discard strategy as well. If you’re playing a card like Merciless Javelineer,you should be able to activate its ability rather consistently. I wouldn’t be surprised to see BR become some sort of combo deck that runs multiple cards that all trigger when a card cycles or is discarded. All those triggers going off at the same time on cards like Grisly Survivor and Horror of the Broken Lands could compound and create a crushing wave of attackers. 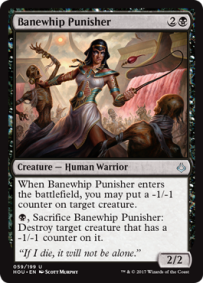 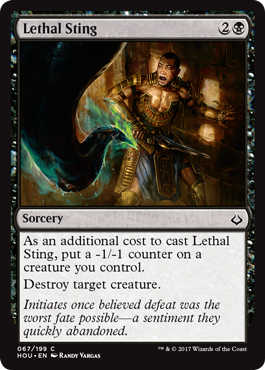 Torment of Venom is also pretty damn good. Instant speed removal for smaller creatures or debilitating for larger creatures, the 4 mana instant punishes your opponent, adding insult to injury if you’ve just killed their creature by forcing them to lose 3 life or discard a card as well. A strong effect, but not broken. It will make for some interesting interactions, and could possibly work on your creatures as well if you’re looking to make tokens with Hapatra and trigger one of your cycling cards like Grisly Survivor.

Banewhip Punisher is also rather cool. For 4 mana it acts as unconditional removal, or you can weaken an opponent and bide your time until you want to sacrifice it. I think it will be a limited all-star and find its way into a lot of different black decks. Attack with it until it becomes redundant, then sac it to gain the advantage on your opponent. 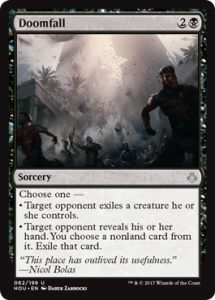 Doomfall is expected to make a big impact in standard, but it should be great in HOU limited as well. Pick off your opponent’s smaller creatures then use this to make them exile their God or other powerful creature, or use its second effect to get rid of a problem card before it even hits the battlefield. Giving the opponent the choice on the first effect is a drawback, but that won’t stop me from first picking this if I see it in my pack.

This curse is a huge tempo swing against your opponents. Your opponent will either have to take damage, discard a card, or get rid of a permanent each turn. I’m not one to play control in limited usually, but give me 2 of these, some removal, and big blockers and watch me laugh as my opponent burns through all of their resources (hand, life, and board presence). I’m half tempted to take this early in draft if I see it and building around it. Between this and Afflict creatures, your opponent will be in for a world of pain. 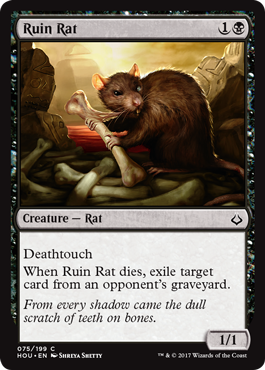 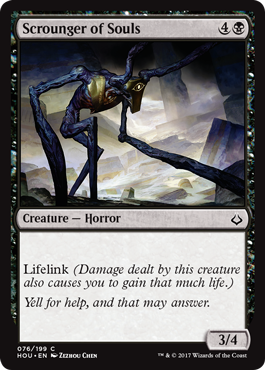 The last two cards I want to quickly go over are Ruin Rat and Scrounger of Souls. Small deathtouch creatures have always had a place in limited decks, and Ruin Rat should find its way into a few black decks regardless of their synergies. It will keep big creature from attacking you, and also be able to sneak in a few points of damage when you’re in a stalemate. Scrounger of Souls, on the other hand, feels like a solid roleplayer in a black deck. If you’re deck is looking for some cards in the 4 or 5 mana slot, I don’t think Scrounger will disappoint you. It blocks well, it’s not overcosted, and it has lifelink. That equals good value in my book.

Well I’m not really let down by black. I feel it delivers around the same power level as black did in Amonkhet limited. The removal is decent, the creatures synergize well with their counterparts in other colors (like UB/BW Zombies, GB counters, etc), and most of the playables fit very well on your curve. Zombies should continue to be strong, but I feel like GB counters gets the biggest boost from Hour of Devastation. It all depends on what you open, but between AKH and HOU you have a lot of options and can go in a variety of different directions no matter what colors you open.

That will do it for black today, but I’ll be back tomorrow after work to post red. As I said in my previous article, I’ll be skipping the midnight pre-release in order to be rested for my flight to Australia on Sunday, which will give me time to post my next blog with ample time before you readers go to your events. As always, thanks for reading and post any interactions or combos with the black cards that I missed!