Bang for your Buck: Investing in Cards for Hour of Devastation – White, Blue, and Black

I thought I’d try something a little different this time and post my specs after the Pro Tour. That way the PT spikes occur and we can be in it for the long haul to see how the metagame reacts for the remainder of the standard season. Just how will other decks change for the mono red match ups, and what other kinds of decks could rise from this meta with more variety? I’ll talk about that soon, but first let’s see how my picks from last season did.

I did much better with my picks for Amonkhet standard thanks to Felidar Guardian and Aetherworks Marvel being banned. Over 90% of what I picked made money or I sold to make the maximum amount of money at the time. It might be a little harder this time around since the Pro Tour is already over, but I still believe there are some prime targets for HOU standard. GP Minneapolis is this weekend and has the ability to reshape standard once more now that mono red is a known factor. Let’s take a look at what white has to offer us this time. 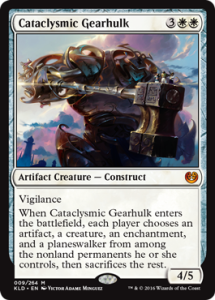 It’s a bit of a long shot, but the God Pharaoh’s Gift decks made a believer out of me. If the gift decks are the new reanimator archetypes, than I think Cataclysmic Gearhulk could be around for a while, both in the main and sideboard. I’d also like to point out that MTG Goldfish featured it in their budget deck series, so both Gift and that deck could increase the casual demand for this mythic rare. I wouldn’t be surprised to see it hit $4 from it’s current price of $2 by rotation. 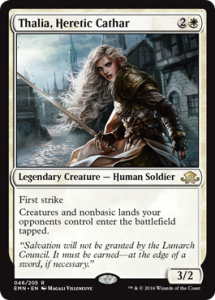 I know it’s rotating soon, but Thalia, Heretic Cathar ($2.50) is a good hate card against mono red aggro decks in conjunction with Authority of the Consuls, and fits well in both UW flash, mono white monument, and UW Gift. Maybe she has one more spike left in her? It’s probably a long shot, but worst case scenario you have a decent card for Bant Humans CoCo in Frontier.

From a sheer value perspective, I think Angel of Sanctions ($3) is worth picking up. It hasn’t seen any play recently, but seems like it could work in the God Pharaoh’s Gift deck from the sideboard or show up in the SB of other white decks as well. This is one of those cards that I think will go up after rotation. All it needs is one of those Angel of Invention moments and it could double or triple up like that card. Grab a playset now while they are cheap and you should be sitting pretty after September.

With mono red threatening almost every non-aggro deck out there, I think Authority of the Consuls ($1.25) is posed to make a comeback as a premier sideboard card for white midrange decks. Depending on how long mono red stays on top, it could double up in price. Fumigate ($1.50) is another card that could benefit from a beatdown and aggro heavy metagame. With Avacyn and Selfless Spirit rotating at the end of summer, this card suddenly becomes the premier sweeper in standard. Get them while they’re cheap.

I also kind of like Glory-Bound Initiate as a counter to mono red and other beatdown decks. It trades very well with a lot of creatures, but also becomes a heavy hitter. At almost $1.50, now is the time to complete your playset.

Kefnet doesn’t have too much room to increase since this god usually shows up as a 2 or 3 of in decks that play him, but at less than $3.50, it’s getting really close to the point where you should just buy him for a long term investment. I’m looking to get in on him at around $3.

It’s a great card to have in control, but is it a $7 card? I think not, especially after mono red showed that it doesn’t care what you’re doing on turn 3. Once cards like Westvale Abbey, Ulamog, and other triggered ability cards rotate in the fall, I think Disallow will lose some value. Now’s a good point to get out. I think it will be $4-5 after this summer.

Thanks to HOU releasing some very fun mill cards, Startled Awake has seen a huge increase in demand from the casual crowd and now sits at $6.75. That’s quite impressive, but I don’t think it will last long after rotation. It’s a great card for EDH and kitchen table games, but I don’t think this price will hold. I see it settling at about $4-5 after rotation. If you don’t plan on using it, sell it or trade it away at this high.

Call me a fool, but I think Drake Haven ($.75) is just waiting to have a deck built around it. Emerge might be rotating, but Tormenting Voice and Cathartic Reunion will still be around, not to mention all the other cycling and discard effects in AKH block. It’s a long shot, but I think casual play could push its value up.

Metallurgic Summonings ($1.25) seems like a good card to substitute for Torrential Gearhulk in this Abrade heavy metagame. It will win you the game in the long run, and will gain some value as a finisher after Thing in the Ice Rotates from control decks at the end of the summer.

Abrade does make it harder to get those artifacts out early to help with improvise, but I can’t really pass up a mythic rare demon for less than $2.25. This is one of those cards that will probably benefit from rotation when removal and competing cards leave standard. It could easily double up in price, and only gets better with more playable artifacts in future sets. Maybe even playable in a God Pharaoh’s Gift build? Good long term investment.

I was wrong last time about it, but as I stated about Cataclysmic Gearhulk, this is one of the cards that was in MTG Goldfish’s Mardu Gearhulk Reanimator deck, and at worst you’re looking at a $1-2 bump from casual players from it’s current price of $2.75 to almost 5 because of the article. Also another possible target for the Gift deck. It should also gain power after rotation, so if you haven’t gotten a play set yet, do it now.

Zombies had a good showing at Pro Tour HOU, but I don’t think the deck has that much longer to live. It will go from tier 1.5 to Tier 2 or Tier 3 after rotation, and it definitely won’t hold it’s price tag of $2.75. If you bought it as a bulk rare, and you didn’t sell at that first spike during Amonkhet, this summer is your last chance to make some money. We’re looking at $1 or less come fall. I’d say the same for Diregraff Colossus ($2.75) and Dark Salvation ($2).

If you’re playing zombies this summer than by all means hold on to them, but if you don’t plan to then you can still get some money by selling them at $11. I expect the price to start cratering in September, and don’t think it will be north of $5 when it stabilizes. Probably going to be more like $3-4 after rotation.

Demon of Dark Schemes never saw much play in standard, which is why it’s less than $1 now, but I wouldn’t count it out yet. We know how strong Temur Energy is, so there could be a place for it in the future, and if reanimator decks become a thing again, I wouldn’t be surprised to see this demon there.

I doubt I’ll do as well as I did this time when the next set comes out, but I do believe my choices are rather logical. Rotation is always one of the hardest times to speculate on cards, because something new could be printed that totally warps the format and turns a previous garbage card into a powerhouse. I still believe that God-Pharaoh’s Gift has some more tricks up its sleeve, but at the same time I’m not underestimating mono red’s ability to keep other decks in check. Respect the red or burn in a pyre of flames.

Well, if you have any other picks for this current standard, feel free to add them down in the comment section. I’ll be back in a few days to talk about Red, Green, and Artifacts, but probably not before GP Minneapolis (which could totally change the metagame again). Hope to see you then!

← The Japan Metagame Diaries: The Cat is Out of the Bag
Bang for your Buck: Investing in Cards for Hour of Devastation – Red, Green, and Artifact →