Ixalan: Playing to Your Weakness – Multicolor, Artifacts, and Land

I was sooo close! I almost had all of my articles done before pre-release weekend! Well, for me at least it will be done. I didn’t have the chance to play in Saturday’s pre-release here in Nagoya, and sadly the only place that did midnight pre-releases closed last month. Instead, I’ll be doing 2 tournaments tomorrow to get a feel for XLN limited. I feel like I have a good understanding of the format after looking at the first 5 colors, but in today’s final article I’ll be seeing how to make each of those archetypes I talked about before even better. 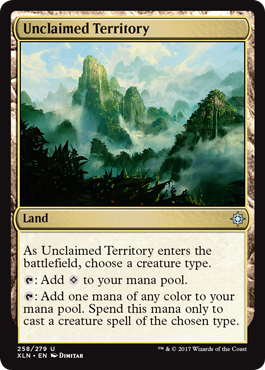 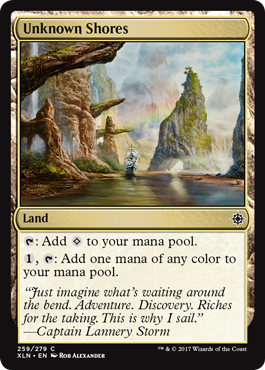 There isn’t much to play in the way of lands, but I feel that you can’t go wrong playing these. While 2 color strategies will be fine, adding a 3rd color from time to time can increase your deck’s power exponentially. Pirates are one of those strategies that can get better by adding a third color, and dinosaurs have tons of finishers worth splashing for. If you’ve decided to run either of these strategies, grabbing 2-3 of these will help you considerably. They’ll probably be higher picks in packs 2 and 3, but don’t be afraid to take them a little earlier in your first pack if there aren’t better choices. I’m rating Unknown Shores slightly higher for limited over all, but Unclaimed Territory can be really good if you draft enough tribal cards. 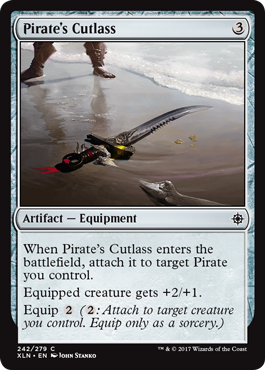 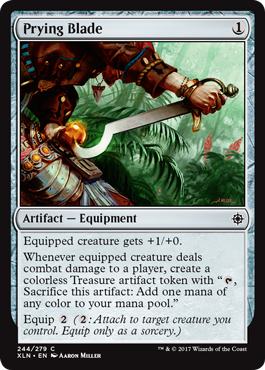 There aren’t many artifacts that I would play in Ixalan limited, but there are a few that are viable. Pirate’s Cutlass is decent in an aggressive deck, and if you’re looking for something to help boost your dinosaurs with Enrage, it’s a better long term choice than some enchantments. Prying Blade is a little bit better, especially in decks that have a bit of evasion. It can give you a lot of extra mana to play with later on which is great for all of the activations/mana sinks in this set. They won’t be playable in every pool, but they might not be bad in that final 23rd slot of you limited deck. 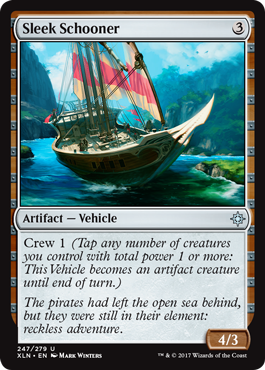 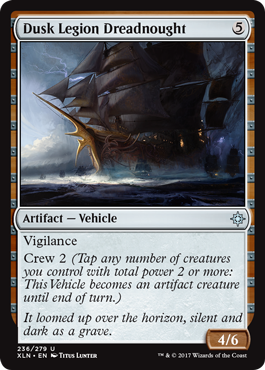 While there aren’t as many vehicles this time around, I don’t expect them to make any less of an impact in your limited deck. They usually provide more oomph than regular creatures do, and they give you some protection against non-instant speed removal. Nothing sucks more than having your finisher taken out by a board wipe or sorcery speed removal, especially if you don’t have many other ways to push damage through. Dusk Legion Dreadnought can take quite a few licks, stopping a lot of the dinosaurs in their tracks, but also dishing out as good as it takes. Sleek Schooner will probably be trading with creatures more often than not when it attacks or blocks, but still a decent creature. 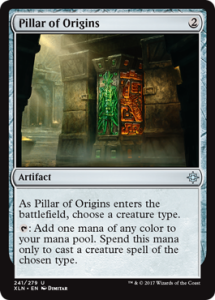 Just as I expect Unknown Shores and Unclaimed Territory to see their fair share of play, Pillar of Origins should also show up quite a bit in those 2 color + splash archetypes. Great as both ramp and color fixer, I expect it to be played a lot in midrange decks. If you’re playing Dinosaurs or other midrange deck, I would draft this fairly high.

I saved the best for last: Multicolor. As always, the multicolor cards pretty much scream what type of deck you should be playing in those colors. It’s not hard to add them into your strategy if you’ve already drafted those colors, but which ones are splashable? Well, let’s take a look. 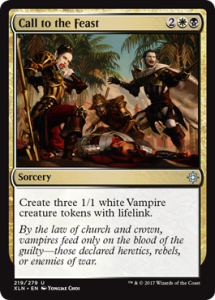 Not splashable, but Call to the Feast still has amazing value. If you’re playing BW vampires this will be a great card, but sadly I don’t think the3 bodies with lifelink and 3 power for 4 mana will have that much of an impact on the board. Still a good card overall though. 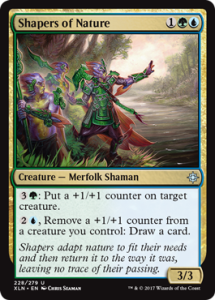 Great card in Merfolk decks, but might not be bad as a splash in a GB Explore deck. The more creatures you have with counters on them, the better Shapers of Nature becomes. It’s also a very good card if you’re playing a lot of treasure tokens and want something to sink your mana into. Plus, you can’t beat a 3/3 for 3 mana on turn three that you can continue to pump up each turn afterwards (if you hit your curve). 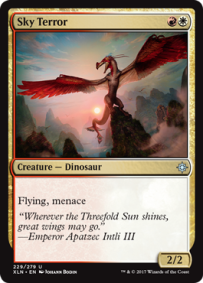 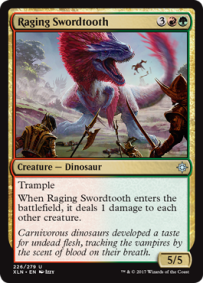 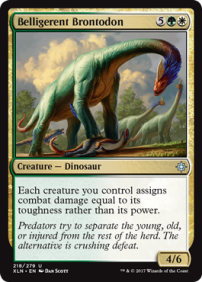 Next we have our dinosaurs. Aside from being rather threatening in the air early in the game, Sky Terror isn’t as good as the other multicolor offerings. Not really worth the splash, but good if you’re playing a dinosaur deck and need the early curve.

Belligerent Brontodon is where things really start to take off. It’s pretty hefty at 7 mana, but after all we’ve seen in the way of ramp (treasure, creatures, spells) that isn’t all that bad. I find the Brontodon to be one of the best dinosaurs you can have in your deck. Why? Because it can stop a large amount of dinos that have 5 toughness or less. It also makes cards like Looming Atlisaur and Atzocan Archer a lot better. Aside from Ancient Brontodon or Colossal Dreadmaw, there are very few creatures that kill it straight out. High pick in draft, definitely splashable.

The last multicolor dinosaur, Raging Swordtooth, is an incredible card in and by itself. The mini board wipe can take out pesky tokens and smaller creatures (like vampires), but it can also activate your other enrage effects. If you’re not playing any enrage effects then it might not be as good, but I would still consider a very high draft pick and splashable. A 5/5 trample is scary, especially if you don’t have chump blockers. 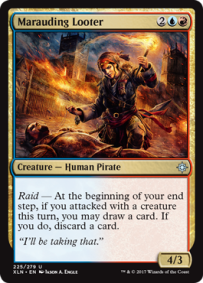 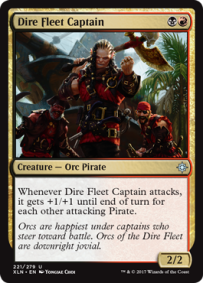 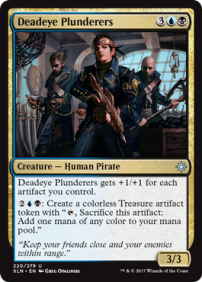 Dire Fleet Captain can be really good in an aggressive Pirate deck, and thrives with a lot of cheaper cards. If your pirate deck is lacking those big finishers and your average mana cost isn’t too high, I think DFC will be a great card for you. However, if you’re playing more of a balanced deck with a higher top end and less pirates, it’s probably better off as a filler card. I’d only splash for it if there were lots of pirates in my pool.

While not as synergistic as the Captain, Marauding Looter is the better over all card, with the ability to be splashed in another deck and better overall stats on both offense and defense. Outside of UR or Grixis pirates, I think it could be splashable in a UG merfolk or a blue based flyer deck as well. Good body and good ability, especially if games go long. You can’t beat card advantage.

Deadeye Plunderers seems crazy in treasure based decks, especially in UB pirates where they are concentrated the most. This would be a reason for playing vehicles and equipment, as it can become huge with enough in play. Out of all 3, Plunderers is the card I’d most likely splash in my deck, regardless of what the theme was. It ramps you each turn, pumps themselves up, and can become a threat on an open table to finish the game alone. If your first color is black or blue and you see it, I’d draft it high.

Other cards that Will See Play

And That’s a Wrap

Got it done, and without a moment to spare! I’m heading off to my first pre-release in a few minutes, so I’ll have to cut this short. My final thoughts are that Pirate decks are a very solid choice for the format, but overall, dinosaurs are stronger. Regardless, the synergy of the tribes is good enough that if you get a great pool you should be able to win those match ups against an overall stronger deck.

I hope you’ve gotten some good ideas from this week’s articles, and that you do well at future limited events! Be sure to stop back in a few days for more news on the new standard metagame, investment advice, as well as how Ixalan will affect Frontier! Thanks for reading!

← Ixalan: Playing To your Weaknesses – Green
Bang for Your Buck: Investing in Cards for Ixalan – White, Blue, and Black →

One thought on “Ixalan: Playing to Your Weakness – Multicolor, Artifacts, and Land”