Bang for Your Buck: Investing in Cards for Ixalan – White, Blue, and Black

After a week off to play the pre-release, re-build my GW cat deck for the new standard metagame, and to hang out with my friends for some other MTG shenanigans, I’m ready to get back on the horse and start up my next series of articles. This standard season is going to be a very strange one. We usually have a Pro Tour about 2 weeks after a pre-release, but this October we have the World Championships, the rest of the national tournaments, and a trifecta of Limited Grand Prix. Aside from the World Championships, there will be relatively few events to help push the new standard format. We might see the beginnings of a new standard, but with only a small number of players at the event, we can’t really see a metagame developing. We’ll be relying heavily on results from SCG Opens, as well as other 5K type events from TCG Player and CFB. I’m not one to want to wait that long to make my speculations for this season, so I’ll be starting today with white, blue, and black cards that I think are undervalued or that I think will go up over the next month or so. But first, let’s see how I did from last time.

I was right with pretty much all of the rotating stuff, but overall there wasn’t a whole bunch of movement from white, black and blue cards that weren’t already expensive. With all of those BFZ and SOI block cards gone now, I think many of those KLD and HOU block cards will start ticking up in value. So what do we have to look forward to in Ixalan? For starters, Control seems to finally have a place, which will effect Esper colors. Disruption is going to be popular for black, as well as removal for a wide variety of targets, and Gift decks might also gain some traction with the focus on graveyard removal shifting towards more midrange and aggro match ups. Let’s see what’s waiting for us.

UW control seems poised to be one of the premier control decks in standard, and its major win condition is Approach of the Second Sun. While they usually only 2, there are a number of other decks that could use this in their sideboards as an alternate win condition, not to mention the previous New Perspectives combo decks from before that will benefit from a slower midrange metagame. Will it go up a lot? Probably not, but at a little under $1.25, it’s worth buying into now if you are considering to buy it. I could see it hitting $3 by fall.

Aside from UW control, there are quite a few white decks that have this in their sideboard for Temur Energy, Ramunap Red, and other beatdown match ups. While it will have to fight against Settle the Wreckage from Ixalan, I think Fumigate will become the most popular form of board wipe for the rest of its time in standard. I expect it to double up by winter to $4 from its current $2.

People are finally starting to see the power of these kitties, and it won’t be too much longer until Regal Caracals ($3) everywhere. I’ve been using them since last season in my GW cat deck, and while that deck has remained a popular fringe strategy, it hasn’t seen too much play until recently. GW ramp used 4 in the sideboard, and now UW Approach is playing it in their sideboards as well. There are a variety of places the card could show up, and with the cat EDH deck just being released as well, I expect its value to start to tick up over the next few months. I wouldn’t be surprised to see the price north of $5 by early winter. 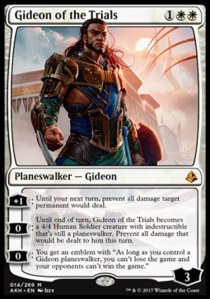 Gideon is going to be good in this format, but is he going to be Gideon, Ally of Zendikar good? I don’t think so. We won’t see him as a 4 of in decks, and it’s hard for him to win a game himself without leaving himself open to attack. His price has hit $19 already, and I don’t think he’ll maintain that. I believe his price might tick up a few more dollars before the Pro Tour, but I think it will fall back towards $15 by winter. Decent, but not format warping like the last version was. Wait for his buylist to hit $15 and get rid of him if you’re not using him. Should be good trade bait as well.

I’m disappointed Glory-Bound Initiate ($1) isn’t seeing much play, but I think as soon as white/x aggro deck makes some appearances, it will be in the thick of things. Good time to get that play set if you haven’t yet.

Sram’s Expertise ($.75) is another interesting card that I think would work really well with the Growing Rites of Itlimoc card, essentially flipping the enchantment the turn it came into play if you had another creature. The question is, what do you do with all of that extra mana once it’s flipped? Until that’s figured out, I don’t think this card will move much, but I think you should keep an eye on it.

With Gift decks off the radar for now, Champion of Wits has dropped to about $3.50, which is great for anybody that has been on the fence about building the deck but the price of Champions were holding you back. There are some great new tools to use in both black and blue for the deck, so I think Champion will rebound this fall, as well as the other pieces in the archetype. Not $7-8 like before, but probably closer to $5. Can’t wait to finally get my other copies!

Poor Kefnet the Mindful still hasn’t found a spot in this metagame, and it still might be some time until he does, but until then I’m gonna continue to recommend him as a good investment because he’s a mythic rare god for around $2.25. Most likely won’t see play until after the new year.

I still think Metallurgic Summonings ($1) is a good long term spec, but I don’t think it will see much play outside of a heavy control metagame. Maybe UW Tokens if the next evolution in the deck? Hmmm.

Another card I’m surprised is so low is Nimble Obstructionist ($1.25). There was a lot of hype surrounding it when it was released, but it has since dropped off the radar like Champion of Wits. I believe we could see it show up in future decks as sweet sideboard tech to stop ETB effects which are becoming more prevalent, such as the new enchantments that flip when conditions are met. Good to get a playset now!

Whir of Invention ($.75) is another incredibly fun card that might see some fringe play this standard season, so I’m going to recommend it. It might not be any time soon before we see an Improvise or artifact based deck, but eventually this card will shine! Good long term investment.

I’m surprised that Bontu’s Last Reckoning ($2) hasn’t found a spot in standard yet, but until there isn’t a reason to play Fumigate and Settle the Wreckage, I doubt it will see much movement. There is a possibility that it will become part of the UB control deck or a sideboard card for another black deck, but I bet you’ll be able to get this for near bulk prices in another few weeks. Another good investment for the future I think.

I don’t think Noxious Gearhulk ($3.50) has that much more to go up, but with Dinosaurs on the horizon as a tiered deck, both the life gain and destruction will come in handy. It still seems somewhat undervalued, so there’s time to buy them if you don’t have any yet. It will probably be slow, but I think it will be $5 by next year.

I’m befuddled that Ammit Eternal ($1.50) never ended up seeing much play. It’s a huge beater, and the Afflict damage is great for beatdown. If Mono black aggro or other black/beatdown decks need to go bigger, this is a good choice. It’s playable, but hasn’t found a deck yet so I’d grab them now. This is one of those 4 of cards that will quickly increase in value when it sees play.

Glint-Sleeve Siphoner ($1) should see an uptick thanks to Sultai and GB energy decks, but I think it could also fit in to mono black aggro if that deck takes off. Don’t expect it to move much, but I think its price will increase.

Another card I’d like to recommend is Marionette Master ($.50). I experimented a bit with this card in my Mardu Gift deck before rotation, and getting wins by Eternalizing it and stacking Metalwork Colossus triggers was a lot of fun. Aside from Gift, it could show up in UB Colossus and a tokens deck, so it wouldn’t be strange to see the Master become the Cinderella card of XLN standard toward the end like Regal Caracal was.

I’m really hoping that standard has returned to “anything goes” and that the format doesn’t get solved as easily as it did when Saheeli Combo or Aetherworks Marvel were legal. We saw quite a bit of decks evolve towards the end of HOU standard, and hopefully we see the metagame shift multiple times before Pro Tour Ixalan and then changing again afterwards. Next I’ll be looking at green and red, most likely keeping the article rather short so I have enough material to put together the third and final one before the World Championships next weekend.

Are there any cards you think should be included in this list? If so, which ones? If you’d like to add a blue, white, or black card to today’s article, feel free to do so down below in the comment section along with the reason why you think it’s a good choice for the next standard season. Until next time, thanks for reading!

← Ixalan: Playing to Your Weakness – Multicolor, Artifacts, and Land
Bang For Your Buck: Investing in Cards for Ixalan – Red and Green →