Bang For Your Buck: Investing in Cards for Ixalan – Red and Green

Today’s article will be slightly more compact than previous ones as I am cutting artifacts from this to give the anorexic multicolor and lands article something more to talk about. Red and green have been seeing a lot of movement over the last few weeks though, so it probably won’t be that noticeable. Ramunap red and Temur energy decks are still a thing, so there’s a lot of value in these colors, not to mention how the resurgence of BG energy and the new GR Dinosaurs deck will affect the colors. Let’s see how my last picks did.

Got a little unlucky with the call on Chandra, but even if you sold it back when I said to, you probably only lost out on another $1-2 of buylist value. The others I’m still at a loss to explain. How they can continue to go up even though they see more play is beyond me. I’m pretty sure there are a few of these cards from last time that I’ll be recommending again for Ixalan standard. 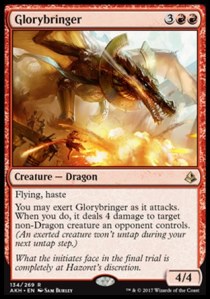 Glorybringer still has a long ways to go up before it reaches its peak. $5.75 is still rather low, especially considering it sees play in Temur Energy, Ramunap Red, and soon to be in GR Dinosaurs. This also isn’t mentioning the various other red based lesser tiered decks that are playing it in their main or sideboards. It’s buylisting for about 600 yen around town here in Nagoya, and is selling for between 800-1000 yen depending on where you go. In Japan, those under 1000 yen prices are going to dry up soon, and outside of Japan I expect it to hit at least $8 if not more by later this fall. 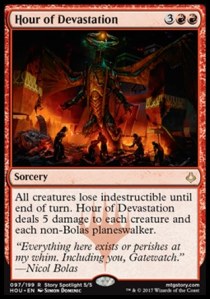 Fumigate seems like the best board wipe at the moment, and while Star of Extinction is plenty fun to play if you can get to 7 mana, Hour of Devastation ($3.50) still holds a special place in my heart (and sideboard). Being able to hit planeswalkers as well as creatures gives it an edge over Fumigate and Settle the Wreckage. I’d expect it to go down a little bit more this season as people play around with pirates and dinosaurs, but don’t count it out yet. Just like Bontu’s Last Reckoning, I think its underappreciated and under used. Keep an eye on the metagame and if there’s a shift towards planeswalkers and midrange decks, pick your copies up. Probably won’t go up anytime soon, but they will eventually. 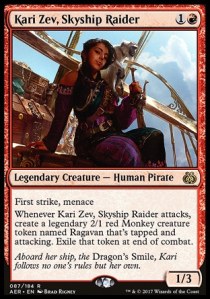 Kari Zev, Skyship Raider is hovering right around the $1.50 mark, but I think that’s undervaluing her. She’s showing up as a 3 of in many Ramunap Red decks, and is also part of the new Pirate decks in Ixalan. Her Menace works rather well with Admiral Beckett Brass, and becomes a fearsome 2/4 first striker with the Admiral in play. I think she’ll double up to $3 by the new year. 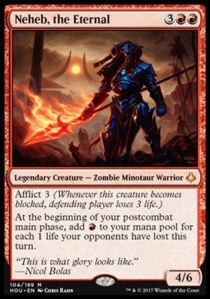 Neheb, the Eternal ($4) is a long shot, but there’s been some chatter among the EDH community about using him as a ramp effect. I tried him out during HOU standard with the GR Eldrazi ramp deck, but couldn’t get enough damage through to really take advantage of his ability. Where I could see him being played is the GR Dinosaur decks. Those decks are already packing a punch, and being able to play a Burning Sun’s Avatar for cheap after your main phase will give you a fearsome board presence. I’d expect casual players will keep his price afloat at round the $5 range, but I don’t think he’ll spike any time soon. Would be fun to see him in a more midrange mono red deck though!

I still think Harsh Mentor ($1) will see play eventually, but it will take a certain metagame where activated abilities are more powerful than enter the battlefield abilities. Between Mentor and Honor Guard, I see a lot of hate bear choices in the new metagame. Might not go up this season, but now’s a good time to get a playset. 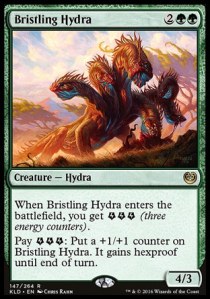 I still believe that Bristling Hydra is criminally underpriced at $2. Temur Energy is still a very good deck as well as BG/BUG Energy decks which will be playing this card. People are waiting to see if the deck can still perform well at high level events, and after this weekend’s World Championships I don’t think the deck will let us down. It might not win it all, but it will still be a contender and a Tier 1 or 1.5 deck. Plus Kaladesh is pretty far back now, which means further spikes will last longer and go higher. I expect $4 by next year. 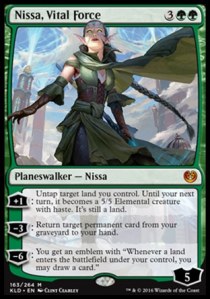 I haven’t given up on Nissa yet. Some pros and semi pros are suggesting that she’s a good sideboard card against control decks, and I for one, can vouch for her. She helped me to take down a UW 2nd Sun deck not only thanks to the pressure of the 5/5 land creature she makes, but also to her ultimate and being able to get back threats like Regal Caracal from the graveyard. $3.25. I dare the price to go lower. There’s no way. I expect more green cards to play her this season. Look for $5-$6 by next year. 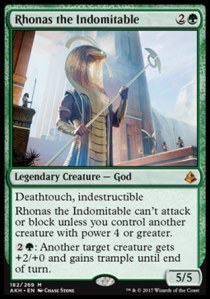 You can get Rhonas, the Indomitable for the bargain price of $11 right now. After being almost $20 for so long, I’d be happy to pay that. I expect Dinosaur decks to put him to good use, and if we ever see a Growing Rites of Itlimoc deck take off, his mana sink seems like a great use of all that extra mana you could be making. BG Energy is another possible deck that could this god, but he’ll probably end up only being a 1 or 2 of which will keep his value somewhat subdued. Still, I wouldn’t be surprised to see him hit $16-$18 by this winter. He’s still buylisting for about 1100 yen around Nagoya, and some places haven’t dropped his sell price to lower than 1500 yen yet. He’ll hold his value for sure. 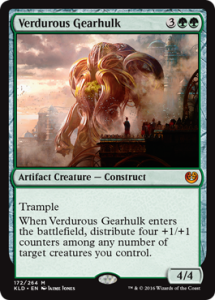 Verdurous Gearhulk ($6.50) hasn’t found a home outside of BG Energy just yet, but just like Bristling Hydra, I find this card to be way undervalued. This is the lowest I’ve ever seen it’s price go, and I’ve seen Torrential Gearhulk’s price spike enough times to know that when a Gearhulk’s price goes up, it goes up a lot. I don’t know if it can reach $10 again by Christmas, but I think the price can only go up from here.

Channeler Initiate has some potential, but hasn’t found a spot yet. Good buy in at $1. I also think that Greenbelt Rampager is still a good beatdown card for $1 as well. Perhaps we will see a GW beatdown deck that focus on playing both of these cards with the help of Tocatli Honor Guard. Play the guard first, then you don’t have to worry about the Initiate’s and Rampager’s drawbacks!

Rishkar, Peema Renegade has gotten a lot weaker since Nissa, Voice of Zendikar has rotated, but I don’t think it’s the last we’ve seen of him. If not this season, he could be back next season in a deck or two. $1.25 is a good buy-in price.

I feel pretty good about 60% of these picks, but the other 40% will need some help from the metagame to really take off. There are some good prices out there regardless. We have the World Championships starting in a few days, so you’ll be able to see if I was write or wrong on some of these. But if we’ve learned anything over the last season or two of standard Magic, it’s that the metagame is more susceptible to shifts and evolutions than previous seasons. There was innovation through out the year, and the metagame switched countless times. The cards I stated might spike sooner than I expect and then go down before the next set comes out, but don’t let that stop you from making a few bucks!

If you have any other comments about today’s colors please post them below. If not, check back in a few days for the final article about Artifacts, Multicolor, and Land cards. I don’t know about you, but I’m getting pretty pumped about Ixalan standard, even if the SCG Open results from last weekend weren’t anything special .