M19 – Playing To Your Weaknesses – White

Yep. I know. The full spoiler has been out since last weekend but I haven’t gotten off my ass to write this article yet. Part of it was because I was testing new Frontier decks on Untap with friends, part of it was my work schedule, and another part of it was that I simply wasn’t motivated enough to do it. It looks like I’ll have to skip next weekend’s Pre-release due to traveling for a family event outside of town. I’ll do my best to get these out before next weekend, but next week isn’t looking any less busy than this last one, so I might not be able to. We’ll see! 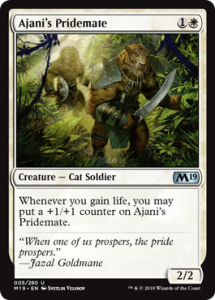 So M19 is looking like the “life gain matters” type deck. Life gain has always been a good tempo effect in long, grindy limited matches. A sudden burst of life can let you be a little more aggressive and not worry about the counterattack, or force an opponent to use some of their resources to reach parity. Shield Mare is an aggressive card against red decks and has a good body on it for 3 mana. The one time 3 life gain isn’t bad either.

Dwarven Priest is another decent card with life gain attached to it. Midgame you could potentially get 5-7 life off of this “Ox”. It’s a great defensive card against aggressive decks, and if you’re looking to buy enough time to dig to or play your beaters/finishers/bombs, then I think this could be a good card.

The best of the life gainers is Herald of Faith. A 4/3 flyer for 5 mana is decent, but gaining 2 life each time you attack while hitting for 4 damage a turn is going to widen the gap between you and your opponent at an alarming rate. There are a decent number of flyers in this set, but at common/uncommon Herald is one of the strongest. Out of all of these initial choices, I would recommend Herald as the highest pick. Not first pickable in draft, but something you’d want to get maybe as your 2nd or 3rd one.

Ajani’s Pridemate is also back in standard, and while it might not be that great in limited, you might want to consider it if you have multiple life gain sources, especially cards like Herald of Faith. As you might know, Ajani’s Pridemate is one of finishers for the Soul Sister’s deck in modern. They continuously gain life until the Pridemate is huge and swing in turn after turn. It’s not something you want to play freely, but the pay off is good if you can build the synergy. Something to consider.

Not all of the cards in white have good synergies with one another, but they do have some great enter the battlefield (ETB) effects. Gallant Cavalry is two cards for one, both of which have vigilance which makes them ideal for offense and defense, Militia Bugler gives you card advantage if you’re playing a more aggressive deck with lots of 2 power creatures, and Angel of the Dawn is a great one-time anthem effect that makes all of your less powerful creatures a force to be reckoned with. She also has a decent body and evasion, but being able to swing with your entire team while not leaving yourself open to attack the following turn would create a huge swing in tempo. I would take each of these rather highly in draft. All are playable and would fit into all types of white/x strategies.

But wait, that’s not all white has to offer. White creatures have never been that strong historically, but they’ve always been team players and were the originally the color with Banding. Banding was an old ability that let you team up when blocking on attacking and choose how the damage was dealt to your creatures instead of your opponent. It made both defense and offense unfair for your opponent. While white doesn’t have that effect now, it DOES have a lot of similar support effects that can mess with an opponent’s defensive capability.

Pegasus Courser is hard to kill in the air, and will continue to give another creature you control flying each combat, Star-Crowned Stag will be able to push through damage early on by removing the best defender from combat, and Aethershield Artificer makes artifact creatures formidable. None of these cards are overcosted, and while only Star-Crowned Stag has the stats and ability to be widely played in white limited decks, the other two offer great support effects if the deck is right. I wouldn’t take any highly in draft, but I also wouldn’t expect these to come back to you either. The first 2 are playable, while the Dwarf will probably end up in a UW Artifact deck to really prove its worth. 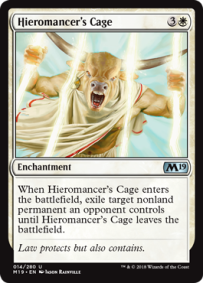 This now brings us to white’s removal in M19. White removal has been largely hit or miss in the last few sets, but it has gotten better. The focus in this set seems to be removing creatures from combat more than destroying, as the only card that does so is Take Vengeance. Even then, it’s at sorcery speed which makes it a lot less effective since it allows them to play around it once they know you have it. This won’t be useful against other white decks playing a large number of vigilance creatures, but it should be good against everything else. Hieromancer’s Cage is a worse Oblivion Ring/Cast Out, but hey, it hits ALL nonland permanents so I’ll take it. Being able to take out an artifact or planeswalker is worth the extra mana. Luminous Bonds is also back in this set, which is basically a worse Pacifism. For overall power level, I’d go with Hieromancer’s Cage, but the other two will do their job well.

Other Cards That Should See Play

I can’t really say at this point what kind of deck white will be good in other than your traditional white/X aggro that goes wide or UW flyer deck. There are some great support cards in the color, but it seems to lack any good finishers. Removal isn’t that good this time around, but many of the cards have playable abilities on them which will make deck building a little bit easier I think. I’ll be taking a look at blue next, and hopefully it will be out soon so you don’t have to wait too long. If you have any other comments or suggestions on today’s topic, feel free to comment down below. Thanks for reading and check back soon!

← Bang for your Buck: Investing in Cards for Dominaria – Lands, Multicolor, Artifacts
M19 – Playing To Your Weaknesses: Blue →