Bang for your Buck: Investing in Cards for Dominaria – Lands, Multicolor, Artifacts

I know. It’s pretty pointless to post this so late into Dominaria standard with M19 only a few weeks away, but I’m a completist so I have to finish it before the next set is released. Work and prepping for the RPTQ sapped up a lot of my time these last few weeks and I just couldn’t drag myself to spend a few hours writing an article when I had work prep, testing, and much needed sleep on my itinerary. I hope you’ll forgive me this one time. I think there’s still a chance that M19 could impact these cards so buying them in the next few weeks before the full spoiler is out could save you some money. Let’s see how I did last time.

It’s hard to say if Metallic Mimic will see any play outside of standard. It’s highly possible as tribal decks get stronger and stronger, but I don’t think it will hold onto it’s $8.50 price tag so I would sell now. It will probably drop a few dollars by rotation in September.

Walking Ballista does see some eternal play in big mana decks, but the biggest upward push on it’s price is from standard. I don’t see it holding its $18 price tag after rotation, and I would say that it’s peak price is now. It will easily drop to around $10 by late summer, so unless you’re planning on using them get out while the getting’s good. It’s buylisting for 2000-2500 yen here in Japan.

I know it only has a few more months to live, but I like Skysovereign, Consul Flagship ($1) in this metagame. It deals with a lot of the planewalkers and can possibly kill them with one attack after their initial ETB, and it also does a good job of blocking Heart of Kiran, Glorybringer, and Rekindling Phoenix. Good pick up for your sideboard, especially if you’re playing green and need flyers.

I also kind of like Silent Gravestone ($.75) as a way to deal with The Scrab God if UB midrange becomes more popular. Crook of Condemnation is good, but Gravestone is better if you’re playing a creature heavy deck and don’t want them getting stolen. 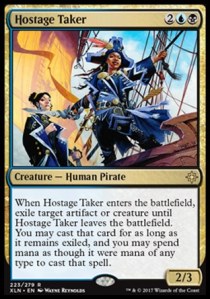 With both Kaldesh and Amonkhet blocks rotating soon, there’s slim pickings when it comes to good deals in multicolor cards. However, at $3 I would say that Hostage Taker is worth picking up. It used to be close to what, $20? While it doesn’t see play now, I could see it becoming part of a Grixis deck in the near future along with the newly spoiled Nicol Bolas. Grixis definitely will have some toys, and I think Hostage taker will fit in just nicely.

I’m looking forward more to post rotation standard now instead of M19 standard, and in that standard I see Dinosaurs, Vampires, and possibly Merfolk seeing play. That’s why I like Regisaur at $2 right now. Great card with a built in mechanic on most of it’s brothers and sisters that dares your opponent to play Chainwhirlers. $5 card easily after rotation.

Angrath, the Flame-Chained has had his ups and downs but has always remained a solid sideboard card in BR/x decks. Great against control, and a decent midrange card in the main deck as well. It’s $5.25 right now, but after seeing the new Nicol Bolas dragon card being spoiled for M19, I think it’s a good pick up since Grixis seems like  strong choice going forward. This won’t hit Chandra, Torch of Defiance type numbers, but the mythic rarity will push it’s price up next season and afterwards. I could see it at $8 this summer, and $10+ by rotation.

Azor, the Lawbringer could get more life come fall when the new Ravnica set hits shelves, and there is a chance that control will need finisher once cards like Torrential Gearhulk rotates. Lots of card draw will also be rotating, so there’s a chance he could see some play. At $1.75 you’re not going to lose much on this investment if I’m wrong.

I don’t know if I’d call Journey to Eternity a penny stock or not at $2, but there’s something about this card I really like and I feel like there will be a deck out there for it either next season or the season after. It’s a good card to get 3-4 of just in case. It has a lot of potential.

Lands are a tough call. You have to look at the current metagame and guess which decks will be left in tact the most after rotation, and also look at how affordable they currently are. As I said before, I think the new Nicol Bolas planeswalker will help out Grixis a lot, both the control and midrange variety, so I would expect those lands to go up in value. Drowned Catacombs ($4.70) and Dragonskull Summit ($3) both have some space to grow. I could see Catacombs hitting $6, and Summit hitting $4.50 or so by the end of summer on strong Grixis showings. 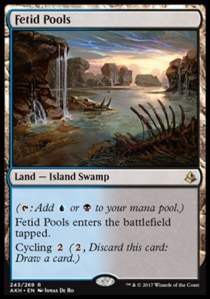 The cycle lands are unique and will probably show up here in there in casual decks and some eternal format decks, but for the most part I would say their time is done. Fetid Pools is just under $5.50 and there is simply no way that price will last for long. It’s up due to it’s place in Esper Control and UB Midrange decks, but come rotation it will be down to $3 or less. Now’s a good time to sell yours if you don’t plan on using them.

I want to say that Scavenger Grounds won’t see much play in eternal formats after rotation due to the sheer number of options for exiling cards from the graveyard, but you never know. I’m going to say it won’t though, so selling it at $4.50 might not be a bad idea. I’m sure SOME people will use it, but not enough to keep its price this high. Probably a $2-$3 card by rotation if not less. 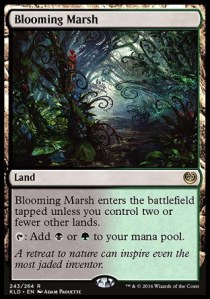 Here’s the tricky thing about fast lands. These are the first of their kind, and modern has shown us the popularity of fast lands as cards like Copperline Gorge and Darkslick Shores. While Blooming Marsh is close to $7 now, I don’t think that will hold for rotation. I think it will go down to about $4-5. If you time it right, you can sell/trade it now at some profit, then buy your copies back at the end of summer. It’s fine to hold on to them as well, but it will probably be at least a few years until they see their price start to spike.

I would say the same about Spirebluff Canal ($8). It’s see a lot of play now, and will see some eternal play, but there’s no way it will keep that price tag after rotation. Sell now, buy back when it’s $5-6 after rotation.

Spire of Industry($1.50) seems like a good call since it could see some play in artifact based decks in modern such as Affinity as a budget option to Glimmervoid. It won’t go up much, but I don’t really see a card like this going down in price in the future. Grab a playset when it bottoms out in a month or so.

Again, sorry I didn’t have the time to do any writing this month. All the testing, my work schedule, and a number of other factors kept me from doing it. If I was working part time I’d have more than enough time to keep up on my articles, but sadly this website doesn’t pay the bills. It’s a labor of love and is at the whim of my full time job. Hopefully things will get more exciting with M19 and I’ll have tons of of content to produce! Anyways, I’m hoping to get another article out for the blog next week if possible, so be sure to stop back in then. If there were any other cards you think should have  been mentioned in my articles, feel free to leave them in a list down in below with your predictions.

← Bang for your Buck: Investing in Cards for Dominaria – Red and Green
M19 – Playing To Your Weaknesses – White →

One thought on “Bang for your Buck: Investing in Cards for Dominaria – Lands, Multicolor, Artifacts”