Bang for your Buck: Investing in Cards for M19 – White, Black, and Blue

Disclaimer: I can not be held responsible for any poor decisions I make in regards to cards you might buy in response to my article. I’m going to post my thoughts and plead my case for each card I recommend, and if you agree then by all means head out to your local gaming store or buy cards online and try to snap up some good deals. I’m basing my information off of months of standard gaming experience as well as prices in my area and how they’ve reacted to the ever changing metagame. I can only hope that the decisions I make are good ones and that my gamble pays off after buying the featured cards. Prices I used are based on TCG player.com’s mid-level price range.

Pro Tour MTG 25 was the other weekend, and while a few new decks showed up in this team trios competition, I don’t think the prices will be moving too much this season until we get closer to rotation. We have very few people playing standard these days due to the PPTQ season being Modern and the Grand Prix schedule being a mix of various formats, and I don’t think things like the Store Championship will get people playing it this much. Nope, standard is going to be in hibernation over the next month or two leading up to rotation, which means we’ll have a decent amount of time to look at which new archetypes will gain power and which cards will go up as a result. I think We’ll find a few more good deals this time than before.

I did alright, but I think that the best time to buy cards is going to be this summer season as interest in standard wanes due to all of the modern play. The lack of demand will surely make quite a few deals to be had, but when to buy is going to be important. Let’s see what’s available for a good price at the moment. 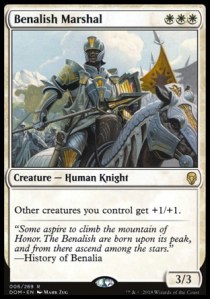 Benalish Marshal ($1.50) has already shown that it works in decks like BW Knights and GW Tokens, and while tokens is losing a lot of their cards to rotation, I think BW Knights has some potential. This card could end up fitting into a lot of go wide strategies as a 4 of, so I think it’s a good investment at its current price.

Shalai, Voice of Plenty is another card that I think will see play next season. GW tested well during the last RPTQ season, and it’s only $2.75. I don’t think she’ll be a 4 of, but she could show up as a 2-3 in GW value/midrange decks. With the Guilds of Ravnica set coming out in about 2 months, I’m sure we can expect some powerful GW Selesnya cards. The guild always had some powerful effects and I see no reason why she won’t see more play next season.

There’s a lot of casual demand for Crested Sunmare right now, especially with the printing of a new horse cycle in M19, but can its $5.50 price tag stay that high after rotation? I think not. It won’t bottom out like most rares at rotation as the casual fans will keep it afloat, but I think it’s more realistic to think of this as a $3-3.50 card at the end of summer. Good to trade away if you want value from it now, then picking it up cheaper later.

I kind of like Sram, Senior Artificer ($1.75) down the road in the long run in some kind of eternal format as a combo piece. I’ve seen him show up in Cheerio type combo decks in Frontier, and I wouldn’t be surprised to see somebody eventually build a competitive deck with him, Jhoira, or both. He’ll probably drop a little more at rotation time, but I think it’s a good long term prospect.

I’m kind of interested in Kopala, Warden of Waves as a way to protect your merfolk from the sideboard. UG Merfolk has always been on the cusp of playability, but it will really need some good Simic cards from the new Ravnica set. I’d say $1 is a good by in for this longshot. I fully don’t expect this to do really go up but you never know what might be printed for UG.

Another super longshot is Naru Meha, Master Wizard ($1.50). The fact that both this card and Kopala are legendaries means that you won’t be seeing a lot of them in a deck, but I know how popular the Izzet guild is and you can be sure there will be a lot of new wizards in the fall. Naru Meha makes your best spells even better (later in the game) and the anthem affect is also good to have. Chances are low, but hey, we’re just doing this for fun anyways. Blue is always hard to make picks for. 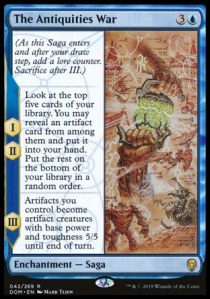 Out of all of the choices we have in blue, I think The Antiquities War ($.75) has the best chance of seeing more play. Sai, Master Thopterist decks have been rather promising, and Karn is a powerhouse in artifact decks. Sure the deck will lose a good amount of cards like Ornithopter at rotation, but if there are a few good 1-2 mana artifacts in the next set I think this Saga could show up more. The same could also be said of Zahid, Djinn of the Lamp ($.50) if more playable artifacts show up post rotation.

I’ve seen Paradoxical Outcome see a decent amount of play as a combo piece to give it a spot here as a long term investment. It’s a $.50 card that usually shows up in multiples in the combo deck it’s in, and while it won’t go up any time soon, this could see some value in a year down the road. Just a thought.

Kefnet the Mindful also springs to mind as a good investment since it’s around $.75 and a mythic rare god. While the gods of Amonkhet aren’t as good as the ones from Theros block, I think there is a enough playability in a 5/5 flyer with indestructibility to make sure you grab some copies for the the long haul. Could end up being a good EDH card. 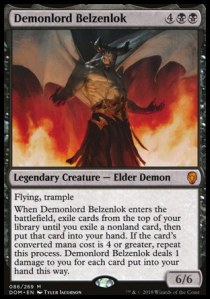 I like Demonlord Belzenlok for $1.50 a few reasons. 1) He’s a mythic rare 2) He’s a demon, and if you played Ravnica block before then you know the Rakdos guild has a lot of other good demons which could synergize 3) Again, Rakdos gives a lot of disruption and removal to BR colors, so instead of blue based control decks, we could see a comeback of Mardu or Jund which could easily slot Belzenlok in there.  Finisher and card advantage in one, especially if you’re playing a a control deck with planeswalkers or other big finishers. I think this is a good call.

Arguel’s Blood Fast/Temple of Aclazotz ($2) saw a lot of play in the sideboard of black based decks, especially those playing a good number of creatures. I also remember a lot of Rakdos cards from Ravnica working well with loss of life, so I think it will become a great enabler in next season’s black midrange decks both main and sideboard. I expect the card to double in price by October sometime. 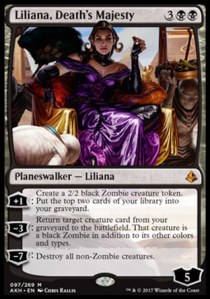 Will Liliana, Death’s Majesty see any play outside of standard? In EDH perhaps, but definitely not anywhere else. I don’t think Commander demand will be enough to keep her current $11.75 price going, so I would recommend selling or trading her away if you can get some value now. Most likely she’ll end up around $7 after rotation.

Mono black showed some potential as a great budget deck during Dominaria standard, and while the deck will be losing a lot of removal like Fatal Push and cards like Vehicles to give it an extra push, Dread Shade ($.75) and a number of other playable black creatures will survive. Shade will be a 4 of in this deck, which means there is good reason to believe it’s price will go up after rotation.

I’m kinda of sad nobody tried to break Torgaar, Famine Incarnate ($.50). He has combo written all over him. He reduces a player’s life to 10 when he comes into play, and if you have a critical mass of tokens he’s incredibly easy to cast. In GB or WB tokens, I wouldn’t be surprised to see him cast for 4 mana on turn 4. Heck, he could even be a good Brawl Commander. Keep him in mind after rotation.

Just like with Arguel’s Blood Fast, I think loss of life effects will work very well in Rakdos builds. That being said, it’s worth considering Dire Fleet Ravager for $1. It makes all players lose 1/3 of their life, and if there are any cards that give you advantage from losing life it could see some play. As a mythic rare the potential for a big bump in value is possible.

Well that was a lot of jank in today’s article. It just goes to show you how big of an impact Kaladesh, and to a lesser effect, Amonkhet block had on standard. While we’ve had a lot of diversity as of late in standard, there are still so many powerful effects in the earlier blocks that it continues to warp the format even this close to rotation. There are some beginnings of new decks like BW Knights and Merfolk, but cards like The Scarab God and Fatal Push have suppressed a  lot of strategies. It seems like WoTC learned their lesson after Kaladesh block and the newer sets look more balanced, but we won’t know for sure until October.

Well, thanks for reading and sorry for the gap in between posts. Life gets busy and sometimes you just can’t find the time to sit down for 3-4 hours to get an article out. I hope to have the next article about Green and Red out by next week sometime, but it will probably take a back seat to Eternal Weekend Asia here in Yokohama coming this weekend. Keep an eye out for it!

← M19 – Playing to Your Weaknesses: Artifacts, Multicolor, and Lands
Bang for your Buck: Investing in cards for M19 – Red and Green →