A New Frontier – Absolutely Shocking: The Impact of Guilds of Ravnica on Frontier (Part 2)

“A New Frontier” is a series of articles based around the MTG format created by Hareruya and Big Magic in Japan that uses only cards with the new border from the M15 set and onward. In these articles I plan on follow the results from tournaments, talk about viable decks in the format, as well as powerful cards. I hope to do at least an article each month with updates on the format, results, as well as the current status of its popularity. Please keep in mind that these are merely exploratory articles and that the Frontier format is still trying to find its footing. It could end up doing very well and develop a following like EDH has, or become just another footnote like Tiny Leaders.

Welcome back to part 2 of my Frontier Impact article on Guilds of Ravnica. There were simply too many things to talk about last time so it seemed best to split things up to make it easier on myself and on my readers. Below you can read about my 3 Star choices, honorable mentions, as well as how I think the metagame will shift because of these cards. Read on to see what cards made the list!

I’ll be covering all rarities and all card types in this article, as well as the possible financial impact of GRN on Frontier cards. Just as before, I’ll be using a ranking system to categorize all of my picks. Please keep in mind I’m not talking about cards that will be only in Tier 1 or Tier 2 decks, but that could fit into a variety of strategies.

The highest level, 5 stars, are strong cards that you’ll see all around the Frontier format in various decks. These are probably 4 ofs, and will probably be the first cards to see a spike this format takes off. An example would be a creature that gains you tons of advantage or a spell that locks down an opponent for the remainder of the game like Ugin.

At 4 stars, we see cards that are still powerful but are usually confined to 1 or 2 decks. This could be a combo piece that only fits in one deck (but is incredibly powerful), or a card that can only reach it’s full potential with a deck built around it to support it. Once it gets going though it’s almost impossible to get rid of. A good example would be spells like Chord of Calling or creatures like Siege Rhino.

For 3 stars, we have cards that are showing up more in the sideboards than the main boards, but depending on the metagame they could show up and be potentially good against a large variety of decks. These are cards that could be silver bullets against certain strategies, but also be weak to other cards unintentionally. I see cards like Thalia, Heretic Cathar in this spot.

Once we get to down to 2 stars, we start to see fringe playable cards that are good in the lower tiered decks, but probably not a first choice or even the best choice for that deck. You’ll rarely see these 2 star cards played.

1 star is a card that will probably NEVER show up in the format. For the sake of time, I will be focusing mainly on 3-5 star cards and only briefly touching on 1 and 2 star cards when they become relevant.

At the end of the article I’ll also be discussing which cards in Frontier become stronger as a result of cards from Rivals of Ixalan, and I’ll speculate which archetypes will see an increase in power. 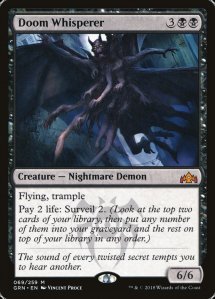 Not sure where it would fit in, but damn this is a powerful card. Surveil on a 6/6 flyer with trample is incredible. Perhaps a GB Delirium deck could use it? Or maybe it’s possible to build a mono black demon/Liliana’s Contract deck now? There are plenty of good demon cards like Ammit Eternal, Mindwrack Demon, and Demon of Catastrophes, so why not just have some fun and make this flavorful deck? Mono black has been playable in the past, but maybe now it has what it takes? 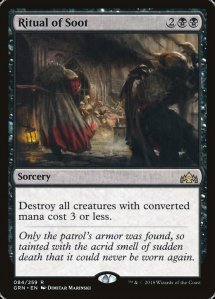 Languish is probably still the best 4 mana board wipe in black in Frontier, but I can see a case being made for Ritual of Soot. Being able to take down huge creatures in GB Hardened Scales is a plus, and you can also benefit from playing a lot of 4 mana cards then playing this as well to have more of a one sided wipe. Good with Kalitas for sure. Potential sideboard card. 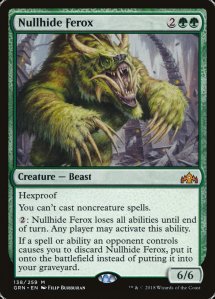 Good card for green Stompy decks, and also super hard for control to deal with. Maybe we can finally make a decent mono green or GR stompy deck? Could also be really good with Temur beatdown decks next season alongside Savage Knuckleblade and Surrak Dragonclaw. Great with Ferocious cards. 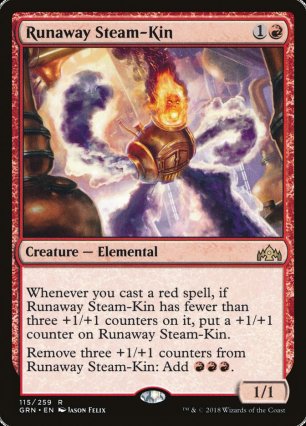 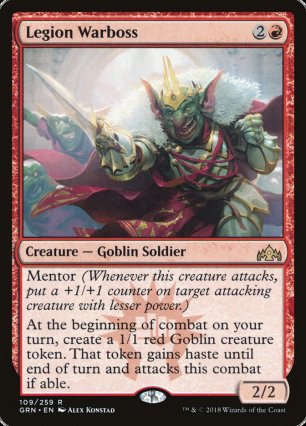 Red Deck Wins and other Red based decks simply have too many options to make these playable. Legion Warboss could be good in a Goblin tribal deck alongside Goblin Piledriver and Reckless Bushwhacker, or in some other token strategy that doesn’t want the  ” Goblins must attack” rule of Goblin Rabblemaster. Not sure where it will fit in Frontier. The same goes for Runaway Steam-Kin. It comes down as a 1/1 that gets bigger with each turn in decks like Ramunap Red, but wouldn’t it better to just play Earthshaker Khenra or the Viashino Pyromaner that turn? Seems too slow for Frontier. 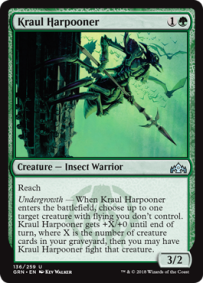 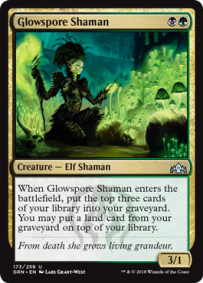 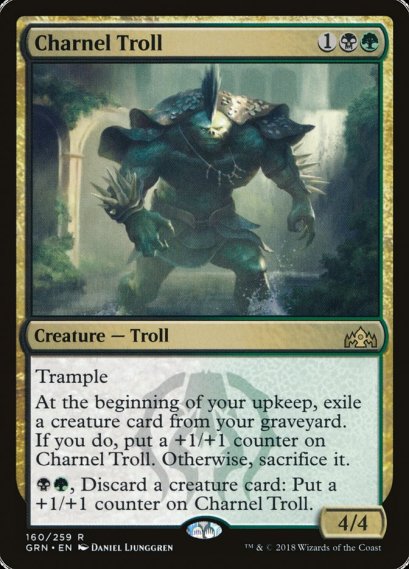 Kraul Harpooner could be a great sideboard card against flyers in Rally or Delirium decks, and Glowspore Shaman could help out Stitcher’s Supplier in Dredge to super charge a turn 3 with multiple Prize Amalgam’s coming back onto the field. Charnel Troll also seems super powerful, but not in Rally which wants to keep its creatures in the graveyard. Perhaps Charnel Troll could work in the Soulflayer decks that showed up last season and put up some good finishes? It gives the deck a powerful early drop, gives Soulflayer trample if Delved, and if you have excess creatures or can’t draw your Soulflayer, it becomes a fearsome beater as soon as turn 4. 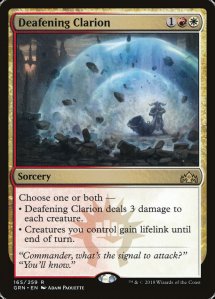 Jeskai control is one of the winners of this new format, and can now be considered viable thanks to both the shocklands and Deafening Clarion. Perhaps Jeskai dragons will make a comeback in the future as well? I could also see this being very useful next set if Mardu control/midrange becomes viable. Good sideboard card. 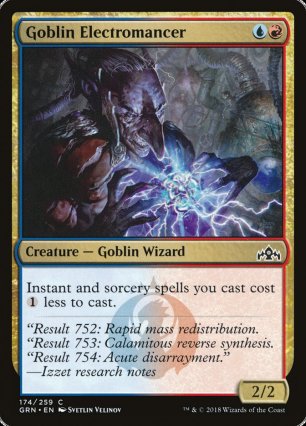 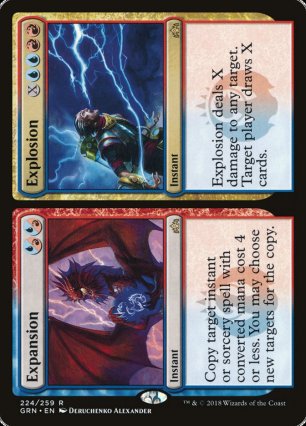 Goblin Electromancer could have quite the impact on combo decks or those that are looking to cast spell after spell in succession to overwhelm an opponent. Works great with Arclight Phoenix strategies, UR Wizard burn, and possibly even Jeskai Ascendancy as well. Won’t see his impact immediately but he’ll show up in the future.

Expansion/Explosion also seems REALLY good as both a finisher and card advantage for Jeskai Control decks and another reason why the archetype is on the rise. Expansion can act like a second removal or counter spell when you need it, and late game it gives you an unsurmountable advantage. Neither of these cards showed up in many initial brews, but give it some time! 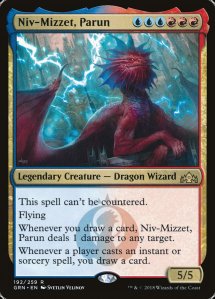 You’ll be happy to hear that multiple people signed up with Grixis dragon decks playing Niv-Mizzet, Parun in the 49 person Untap Frontier league this season. This is simply too much fun not to play with. I don’t know how well those decks are doing, but with cards like Thunderbreak Regent, Glorybringer, and a splash of black for removal and Nicol Bolas, the Ravager, what’s not to like about this deck? Plus shock lands makes the deck even easier to play with now! I also like this as a finisher alongside the Locust God in a UR Tutelage deck. 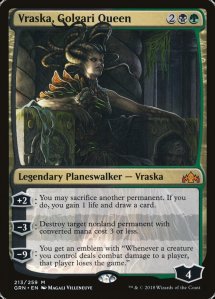 I’m sure Vraska, Golgari Queen belongs at the 4 Star rank, but there simply hasn’t been enough time to brew and test out cards in this new season yet. I could see her in some kind of Sultai control or Delirium deck, but Jund would love to have her too. Great midrange card that I expect will show up more as the metagame settles.

Best of the Rest

With all of these new cards, some decks are bound to get better, and when that happens they can challenge or even push out some of the previously proven ones. Here’s what I think will change in this new Frontier format.

That’s going to do it for this season’s Impact on Frontier article. I’m guessing some of you might disagree with how I scored some of these cards, and there might have been some I forgot to mention, so by all means please leave some comments down below to share your thoughts. The Frontier format has yet to be “solved” and adding all of these new cards into the mix is only going to push us further and further away from that. There is so much space to explore and so little time to do it!

Like what you see? Want to learn more about Frontier? Then I totally recommend checking out the Frontier tab on my blog to read through all of the information I’ve collected on the format since it started. You can also listen to me on the MTG Final Frontier podcast along with Kevin Finkle and others!

As always thanks of reading and supporting the Frontier format! I hope you enjoy brewing and playing it as much as I do. If you can’t play it at your local game shop, remember you can always join the discord Frontier channel to chat about it, as well as play it on Untap, Cockatrice, or Xmage! We look forward to having you join the community!

← A New Frontier – Absolutely Shocking: The Impact of Guilds of Ravnica on Frontier (Part 1)
Magic the Traveling: An Interview with Christian Calcano →

One thought on “A New Frontier – Absolutely Shocking: The Impact of Guilds of Ravnica on Frontier (Part 2)”