Black introduces us to Rakdos for the first time and their Spectacle ability which lets you cast a spell for an alternate cost if your opponent lost life that turn. Usually it’s cheaper, but sometimes it’s more and has an alternate effect if you pay the Spectacle cost. The other side of black is Orzhov, which we’ve also covered. It’s a bit better to see Afterlife effects on black cards since it’s more of a white ability. Black is also known for it’s discard effects/hand disruption, as well as their kill spells. Discard effects usually don’t make the cut, but lately we’ve seen Wizards playing around with the design space and adding to to creatures and other permanents. Will it make the cut this time around? Let’s find out. 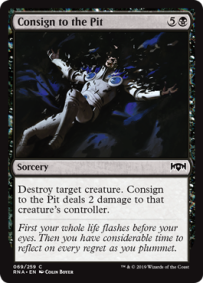 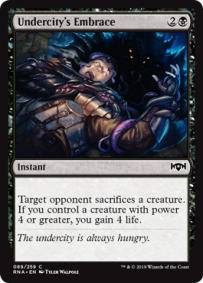 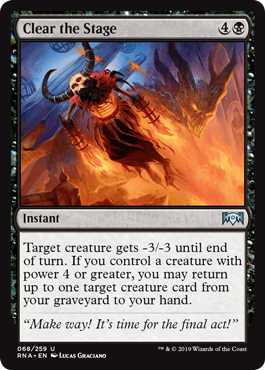 I like starting out with removal in black cause that usually sets the mood for the rest of the color. If black has bad removal, it usually means whomever drops their bomb first is likely to win because burn and bounce spells don’t really cut it. Thankfully, it looks like we have some interesting effects this time around. The most interesting in my first group is Clear the Stage. It’s basically a -3/-3 removal spell with a Raise Dead effect tacked on if you have a big creature in play. You’re almost always able to kill a creature with this spell, and the added bonus of getting one of your creatures back makes it incredibly useful. I think I’d draft it rather highly.

Undercity’s Embrace has a similar effect if you have a big creature in play, but its lack of accuracy in killing the creature you want to get rid of the most makes it less desirable than the other removal spells. If you can play it with big red or green creatures, it shouldn’t be too hard to activate the bonus.

Consign to the Pit type cards usually show up from time to time. Almost every past limited block over the last few years has had an unconditional kill spell at 6 mana. It’s hefty, but people are still going to play it in their deck. The added 2 damage is nice, but I’d rather it just cost 4 mana with no bonus. This thing will only be useful late game.

Consign to the Pit – RATING: 3 Stars 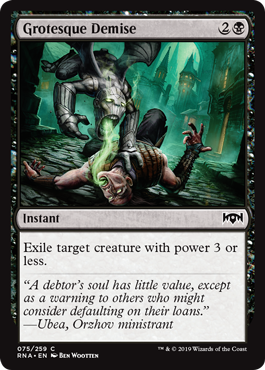 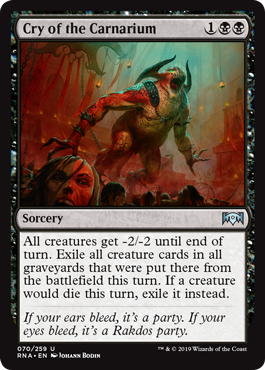 The other two removal cards have some restrictions but are for better or worse, playable. Grotesque Demise and Cry of the Carnarium do a great job of stopping effects like Afterlife from triggering and the later will stop go wide strategies dead in their tracks. There are also quite a few high toughness, low power creatures this set so Grotesque Demise will take out irritating defenders as well as serve you well against aggro decks. I think both are solid choices in limited and will get picked early in draft.

Cry of the Carnarium – RATING: 3 Stars 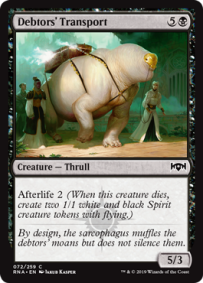 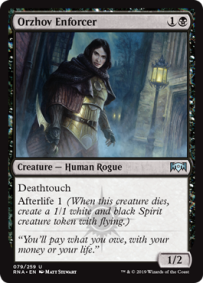 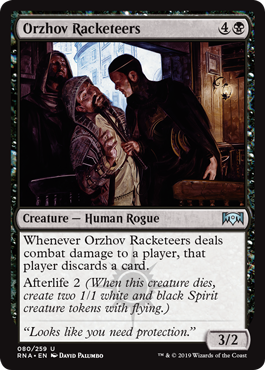 Moving on to creatures, let’s take a look at what I think are the playable Afterlife cards. Small deathtouch creatures usually see some play to fill out a player’s curve, as well as to stop more aggressive decks, and with Orzhov Enforcer you get a free flyer when it blocks and dies. This adds more value to an otherwise troublesome roadblock. Debtor’s Transport is your typical beater with horrible toughness, but it’s made so much better than a card like Canal Monitor because of the Afterlife 2. Trades with almost everything on defense, and will probably kill one of their better creatures in battle on offense then leave you with 2 more flyers. I’d probably take the Thrull slightly higher than the Rogue in draft though.

Lastly we have Orzhov Racketeers, which not only put two bodies into play when they die as well, but if they go unblocked or come down on an empty board they can wreak havoc on your opponent’s hand. If you can give it flying or some other form of evasion your opponent will be in trouble. 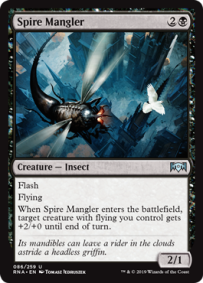 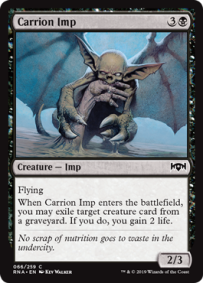 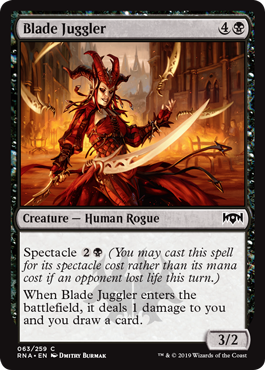 Next up are some enter the battlefield abilities. Spire Mangler provides you with some flying power at instant speed, and also becomes a nice little combat trick itself if you don’t have any other flyers to pump up. I think it would be good in a UB or BW deck, especially those that have more than a few Afterlife cards. The big drawback is the 1 toughness which won’t help you stop a squadron of flying spirits.

Carrion Imp gives you a better body for blocking spirits in the air, and a bonus of 2 life if anybody has a creature in their graveyard, but in the end it just ends being nothing special. Decent flyer that fits on your curve and fills a slot. Nothing more than a roleplayer.

Blade Juggler is actually rather exciting at common for me. Even if you’re paying the full cost of 5 mana for it, getting to draw a card and put a 3/2 creature into play is worth it in limited. It becomes really good in an aggressive deck that wants to keep the cards coming, but even on an empty board it’s playable. Not a super high pick, but I don’t expect these to make it past pick 4 or 5 in a pack. 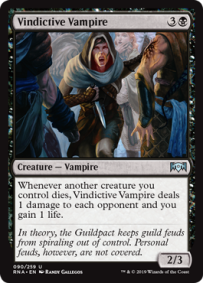 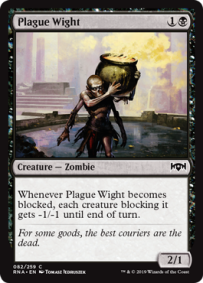 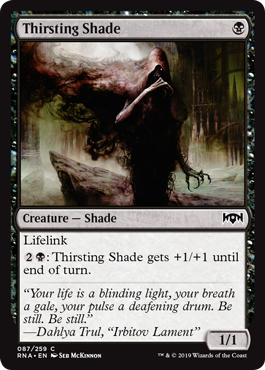 The remaining batch of creatures have useful or interesting abilities on them that could come in handy in battle. Vindictive Vampire works well in Afterlife heavy decks with sacrifice effects, as well as dealing damage to an opponent when you’re playing defense. The more bodies your deck can make, the better. Great with tokens. The 3 toughness helps it stop most of the smaller creatures on the ground as well.

Thirsting Shade is also in an interesting position because early on it gives you some life gain to get ahead in the race, but late game you can pump it up a few times. If you splash the Simic card that makes all activated costs 2 less mana, you could go crazy with it, but that’s a little far fetched. Most of the time I think you’ll be able to get it up to a 2/2 life linker. Everybody likes a mana sink though.

What I like most about Plague Wight is that it makes it impossible to chump it with a 1/1 creature. It basically forces your opponent to block it with a 2 toughness/power creature if they want to kill it. Seems like a good target for equipment, combo tricks, and auras. Great card for that 2 mana slot if you need to bring your curve down. 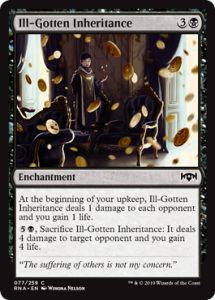 The last card I’d like to mention is Ill-Gotten Inheritance. Yes this is a super slow card and won’t really impact the game right away for you, but the better defense you have the more dangerous this becomes. If you’re playing a UW defender deck this would be a great splash, or if you have a lot of removal in your pool this is a great way to put pressure on your opponent that they’ll have great difficulty getting rid of. More of a build around card, but quite fun if you can pull it off!

In my opinion black’s removal choices are pretty good. Sure there are a lot of hoops to jump through and your targets will be limited, but they should do their job. We don’t really get a lot of powerful creatures at uncommon and common this time around, but I do feel like there are a good amount of value creatures to be had in this set. Instead of focusing on powerful cards like in the past, it seems like Wizards is more focused on creating powerful systems/synergies. There are different ways to put together this “machine” but the pay offs are worth it.

I’m going to be work on red next and hopefully I’ll have it out before the first pre-release on Saturday. Red usually means fast creatures and some fun combat tricks, but we will also hopefully get some good burn spells too. Thanks for reading and check back soon!