This article will be covering the red playable cards from MTGRNA today. We’ll get a look at the rest of the spectacle cards for Rakdos, as well as a first look for Gruul’s Riot cards, which let you either give a creature haste when it comes into play, or a +1/+1 counter. Red also has some interesting burn options and combat tricks, but as to how effective they’ll be in this format is yet to be seen. Let’s take a look at the colors offerings this time around. 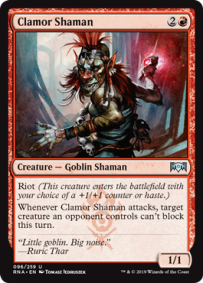 These cards showcase the new Riot ability fairly well. They aren’t super strong, but have abilities that could come in handy during combat. The best of this bunch is probably Ghor-Clan Wrecker. It has menace on a potential 3/3 body which is nothing to scoff at. I think most of the time you’ll be adding that +1/+1 counter to Riot cards and saving that haste trigger for all out final attacks or combat tricks that affect the whole battlefield.

Burning-Tree Vandal is a little more delicate with a 2/1 or 3/2 body, but on an open board late game you can get quite a bit of card filtering with it. Ditch those extra lands and get some gas! Clamor Shaman isn’t too exciting as a 2/2 or 1/1 for 3 mana, but if you’re looking to take your opponent’s best creature out of battle for one turn it’s a decent combat trick. 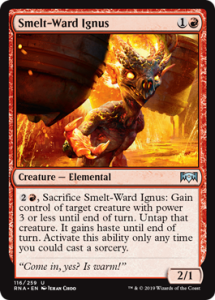 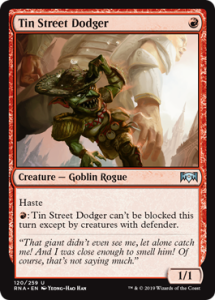 Aside from the 6/5 Rubblebelt Recluse for 5 mana that must attack each other, none of these cards are that scary by themselves, but in the right circumstances they can be. Tin Street Dodger is a good card to draw both early in the game and late game, as its ability can take out all of your opponents blockers if you have the mana. Good card to add combat tricks to or to put Auras on. Smelt-Ward Ignus is pseudo Act of Treason that only targets weaker creatures, but it could still come in handy if you’re playing against a lot of flyers or creatures with big back ends that have been making it hard for your to attack. Very useful in the right circumstances.

Dagger Caster is probably my favorite of the 4 though. Afterlife tokens and other troublesome 1 toughness creatures are going to be a pain in the neck, but Dagger Caster does a great job of clearing the board of them. The 3 toughness also makes it a decent blocker.

Red is a little light on the burn this time around. Flames of the Raze-Boar is good in a Gruul deck that has a large number of 4 power creatures. It turns the spell from an underwhelming burn spell into an instant speed Pyroclasm which isn’t bad considering how many decks play 2 toughness or less creatures. It hits Rakdos and Orzhov especially hard. It’s only problem is the 6 mana it costs. It’s kind of slow.

In a devoted Rakdos deck you’ll have no problem casting Skewer the Critics’ Spectacle cost. Great card to use to finish off a bigger creature or to just put your opponent in defense mode while you perpare for the lethal hit to finish the game. Perfectly fine in multiples, and at common it’s not that unlikely that you end up with a few in your pool.

Another card I like in red, if only because of the synergy it has with Burn Bright, is Goblin Gathering. It’s deceptively strong in draft if you can get a few of them. It’s mortal enemy is the Dagger Caster, but if you aren’t playing against another red deck all of those bodies can take over a game, especially if you have some kind of buff like Burn Bright to pump them up. Even in sealed it’s still somewhat playable as a 1 of, though not too exciting and probably just filler if you need more creatures.

Rumbling Ruin just might be one of the most powerful cards in a Gruul deck if I’m reading this right. If all of your creatures have +1/+1 counters, everybody is basically unblockable. If you have 1 counter, no tokens can block, if you have 2, no chumps. If you have  or more? That’s game ending. I could see this going high in draft in packs 2 and 3, and possibly even in pack 1 if somebody decides to brew around it. Also probably worth a splash in Simic decks.

Not sure how good this will be in limited, but basically drawing 2 cards for 3 mana in your main phase late game, or playing after damage and playing 3 cards on your next turn is good. Problem is that there is limited space for non-creature cards in your deck and cutting removal for this might not be a good idea.

Overall red is rather middling, but their abilities are top notch, especially Riot. Red’s true power lies in it’s multicolor cards, so think of the regular red cards more as a supplement to what you open in your pool that has red in it. They go well with the synergy, but aren’t really worth playing around with on their own. The burn spells are also kind of sad this time.

I apologize for the lateness of this post since I wanted to get it done before the pre-release, but I kinda found myself playing MTGRNA draft and sealed on Arena every night since it dropped so I haven’t had much time afterwards to write. I still plan to release green and multicolor over the next few days though, so be sure to check the articles out before you head off to draft with your new box or at some events next week!