Green usually has the best creatures in any format, and with what we’ve seen so far with the Adapt Simic and Riot Gruul cards in blue and red, there seems to be a lot of potential. What will make or break green is how well you can curve out your deck. From what I’ve learned through the pre-releases, it’s that you need to play a lot of efficient threats that are bigger than your opponents, and not get trapped by playing too many of the powerful but high costing finishers. 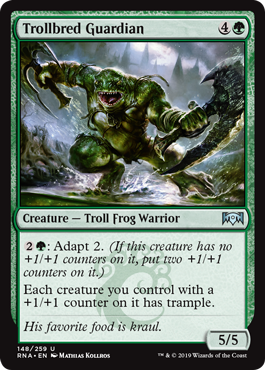 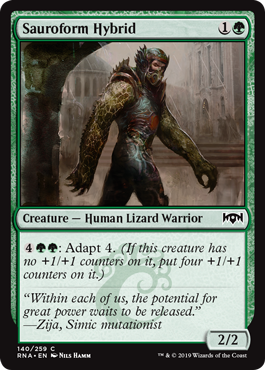 I’ve yet to see an Adapt creature that I wouldn’t play in RNA limited. Sauroform Hybrid is on the lower end of Adapt creatures, but it fits great on your curve and then becomes a scary beater later in the game. Great for decks that have access to big mana effects. Trollbred Guardian would be a decent finisher and playable as a 5/5 for 5 mana, but adding Adapt 2 AND giving all creatures with counters trample makes this an amazing card. Very high pick in draft, even if you only have 3-4 other cards that can get counters on them. Even by itself, having a 7/7 trample is pretty scary.

The Riot creatures are every bit as versatile as the Adapt ones, albeit in a different way. You can go big or you can go fast. Wrecking Beast is really hard to cast, but great to have in long games. You probably don’t want more than one on your top end, but a 6/6 haste trample or 7/7 trample is hard to beat head to head on the battlefield. Good idea to play one of those Lockets with it, or some kind of mana creature to help you hit that mana before it’s too late in the game.

Gruul Beastmaster is pretty cool, even if you’re probably only getting one attack out of it. It pumps up one of your creatures quickly with 2 power if you want to be aggressive, but can also wait a turn and attack with a counter on it to give a 3 power bonus. I like that it creates an urgency for your opponent that they must deal with. Sure they want to block the 5, 6, or 7 power creature it pumped up, but they also need to block this which puts them in a bad position. Somewhat high pick for green decks.

Rampaging Rendhorn is nothing special. Most of the time it’s just a vanilla 5/5 for 5 with no special abilities, but when you want haste you get a 4/4 with haste. Good beater with a nice trick.

Not quite game winners, but good roleplayers that fit on your curve well. Silhana Wayfinder does a good job of setting up your next turn and making sure you have the gas you need to either play your cards on curve or to keep the pressure on. Gatebreaker Ram can get pretty scary if you’re drafting a Gate deck, and we already know that each pack comes with a gate in sealed. Great reason to splash a 3rd color if it shares one color with your main 2. I think most decks will get a +2/+2 bonus for Gatebreaker Ram, but it can get even crazier in draft. A 3 mana 4/4 with trample and vigilance is dangerous. 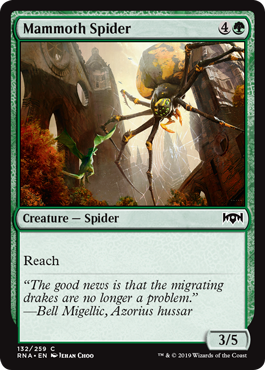 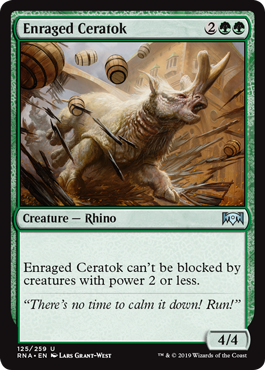 Again, nothing special with these two cards, but quite playable in a green deck. There aren’t many ways to deal with flying creatures in green, so Mammoth Spider is a welcome body to deal with all of those BW spirit tokens and UW flyer decks. Keep it back and don’t let anything get through to you in the air.

Enraged Ceratok is a quality beater. Good stats for a 4 mana creature, and also forces an opponent to trade with one of their own big hitters if they want to kill it. No chumping him.

Moving on to spells, Open the Gates is severely underrated in my opinion. This card is straight up amazing in any 3 color deck, whether it be legitimate or just a splash. Being able to grab a Gate card to smooth out your mana early is huge, not to mention it helps you to hit your curve if you’re looking to play your Riot or Adapt creatures smoothly. Not first pickable in draft, but something I’d take high. Possible 2nd or 3rd pick if I’m in green.

The last NOTABLE card in green is Titanic Brawl, an instant speed fight spell that can be cast for 1 mana if you control a creature with a counter on it. Fight effects have always been pretty good in limited, but this is the first time I’ve seen it at instant speed in recent memory. Very handy in a pinch.

I’ve been trying to grind out a few more wins in Arena before the next season starts, but it looks like Diamond just isn’t going to happen in Standard Constructed. That’s sucked up a lot of my time, otherwise I’d be almost finished with this series. Well, thankfully these articles will end up being more useful from now on due to the increased number of people playing limited on MTG Arena.

Next time I’ll be doing the first 3 multicolor guilds of Ravnica; Azorius, Simic, and Gruul. The final article will then cover Orzhov, Rakdos, and the rest of the cards such as artifacts and lands. If you liked what you saw or have some suggestions you’d like to add about today’s article feel free to leave some comments down below or on Twitter! Thanks for reading and see you back here soon.