It took a little bit longer than I would have liked to get this article out, but better late than never. I’ve been playing a lot of draft and some sealed on MTG Arena, not to mention building some limited decks in paper with friends since release. I think I have a pretty good handle on how good the multicolor cards are, but there might be some you might disagree with. I’ve purposely kept myself from reading any of the other professional limited articles to test how good my evaluations have become. Let’s see how they match up. 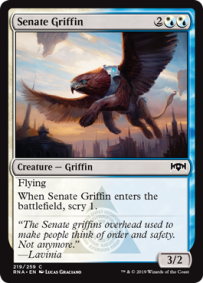 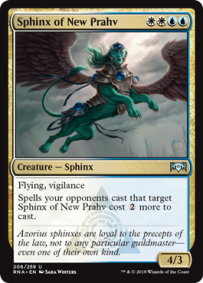 Azorius’ power has always stemmed from it’s flyers. Sphinx, birds, and flying Knights have been a staple of the Guild, and Ravnica Allegiance gives us quite a few playables in Azorius’ colors. Senate Griffin Gives us a decent body that scrys when you it enters the battlefield. The 2 toughness makes it a poor match up against a deck heavy with Orzhov spirits, but aside from that it should provide you with good air support.

Sphinx of New Phrav gives you a little more power for the same cost, and also lets you be defensive while being on the attack as well. The ability to protect itself from kill spells for a few turns until your opponent can pay the mana is also useful. It will match up poorly against other UW decks, but should be good against Orzhov and Rakdos.

Azorius Skyguard is better than most people think. It absolutely shuts down Orzhov tokens, and is great in mirror matches. The 6 mana is a little high, but I think it’s totally worth it. I played 2 in an Esper limited deck and made it almost impossible for my opponents to block or attack.

Azorius Knight-Arbiter might not be aggressive as the flyers, but it’s got a great body for blocking and also hits for 2 unblockable damage each turn. Good target for enchantments or other combat tricks that can increase his power. If you’re building an evasion heavy deck with lots of flyers and don’t have many good finishers in other colors then definitely play this. I don’t think it will always make the cut in a 3 color deck with good beaters though.

What I like so much about this Guildmage is the ease of use. It only costs one mana to gain 2 life or to loot a card away. Solid roleplayer in an Azorius limited deck.

Talk about a great tempo card. On one side you get a tap effect that cantrips, and on the other end you get to put 2 flyers into play and then gain life to offset any you might have lost. Great as both an aggressive and defensive card. I think I would take this early in draft as it’s a great card. I like it in Esper especially due to being able to get all those Spirit tokens into play then gaining a ton of life.

Azorious has always had impressive enchantments, and giving an Arrest affect Flash is pretty good for a common. Both pseudo removal and a tempo effect. Can really screw with your opponent if multiples. 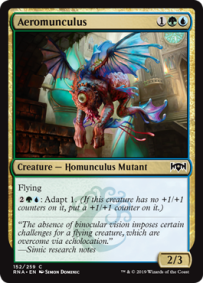 I already talked about how much I liked Adapt creatures in green and blue, and the multicolor offerings helped to cement Simic as one of my favorite Guilds to play in RNA limited. You’re telling me I can play tempo, big beaters, draw cards, and counter spells I don’t like? Sign me up! Aeromunculus is a cheap flyer that is hard to kill due to it’s stats and Scuttlegator is huge wall that stops almost all other finishers and becomes a huge one on its own when you pay 8 mana (great with the green Troll that gives creatures with counters on it trample).

My favorite is Sharktocrab though. It’s a great beater that’s well costed, and that Sleep ability makes it incredibly valuable in limited. I would definitely splash green in an Azorius or blue in a Gruul deck to play this guy. High pick in limited.

Another thing I like about Simic cards is that they let you move counters around so you can reset any special Adapt abilities like Sharktocrab’s and use them over and over again. Galloping Lizrog is incredibly scary in a devoted Simic or Gruul deck with lots of Riot effects. Taking even one counter off a creature makes him a formidable 5/5 trampler, and taking 2 makes him a scary 7/7 finisher with trample. High pick for Temur/Simic players in limited. Probably going to go higher in packs 2 or 3 than in pack 1.

Combine Guildmage is a limited roleplayer in Simic decks, helping you to pump up those creatures that don’t have ways to get counters on them, and reseting Adapt effects as well. It can also be good late game in helping you to make your weaker creatures slightly stronger. If you were to be playing a Bant deck that puts Thopter tokens into play with Deploy, Combine Guildmage could help them to enter as 2/2 flyers. It’s probably going to be best in a Simic deck though. 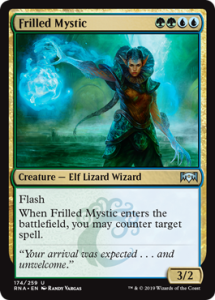 I’m not usually one to play counterspells in limited, but if you put it on a body heck yeah I will. Hard to cast in Bant or Temur, but definitely playable. If you’re heavy in blue and green this should be a super high pick in draft.

Applied Biomancy is a great tempo effect at common that can easily get you a two for one when attacking. Incubation/Incongruity is a little bit harder to evaluate, but I still think it’s a great uncommon card. On one side it helps you to keep the pressure on your opponent by digging to find you a creature, and on the other end it gets rid of a dangerous finisher your opponent is playing. Rather a 3/3 vanilla creature than a 5/5 flyer with trample right? 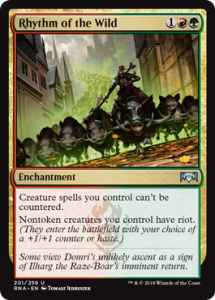 One of the strongest cards in Ravnica Allegiance limited has to be Rhythm of the Wild. Giving all of your creatures haste or a +1/+1 counter is absolutely worth a splash into red or green. The can’t be countered ability isn’t as important in sealed or draft, but still good to have. There also isn’t a lot of great instant speed removal, so having this in your deck almost assures that you’re getting some damage in. I especially like it in Temur decks as it allows creatures with special Adapt abilities to activate them as soon as they enter play. High draft pick.

Gruul has really got the fighting spirit in RNA. There were some good ones in green, and Savage Smash isn’t bad either. The +2/+2 bonus almost assures that the creature you target will survive the fight, and if your opponent doesn’t have anything to stop that creature you can hit for quite a lot of damage. Colossus also hits quite hard and is probably more useful than Collision in a pinch, but it’s good to have a way to deal with Angels and Griffins just in case.

I’m actually surprised at the level of power of this common. You can get a 4/4 trampler rather early in the game, and late game it packs quite a punch. Wouldn’t be ashamed to have 2-3 of these in my limited Gruul or Temur deck.

There aren’t too many artifacts or enchantments that you’d need to protect yourself against, but having the ability to destroy one whenever you damage an opponent is convenient. What makes this a great beater is the fact that it can only be blocked by one creature. There is no way your opponent will be able to trade multiple chump blockers to kill it. If your opponent doesn’t put their own beater/finisher in its path, you’re going to devour their creatures one by one. Good with combat tricks like Colossus as well.

Good body, better ability. Great card in both Gruul decks with a lot of Riot affects and also as a splash in Simic. Being able to use Bolrac-Clan Crusher along with Galloping Lizrog makes the Temur combination in limited extremely powerful. High draft pick in packs 2 and 3, but I don’t think it would be wrong to take it pick 3 or 4 in the first pack either.

Nothing special about Rubble Slinger other than it’s a good limited role player to stop all of those 1/1 spirit tokens from Afterlife effects. If you don’t have Slinger or the 3/5 spider in green Gruul is going to get in trouble in those long games where your opponent picks away at your life total in the air. Not as necessary in a Temur build though thanks to blue flyers.

I’m honestly surprised at how useful Clan Guildmage is. If you flood out, Clan Guildmage will provide you with a steady stream of beaters to block or attack with, and if you’re playing an aggressive deck it removes their best blocker each turn. Quite versatile.

I appreciate you sticking with me as I work my way through a busy schedule and get distracted by more exciting prospects such as MTG Arena and my Untap leagues. I still have one more article to write but not sure when it will be out. The optimist in me says it will be out by the weekend, but I can’t say for sure. Orzhov, Rakdos, and the remainder of cards will be in the next one. How good is the removal in BW and BR? Check in next time to find out.

← Ravnica Allegiance – Playing to Your Weaknesses: Green
Code of the Cardboard Samurai 1: Welcome to Magic the Gathering in Japan – Magic Fest Yokohama →